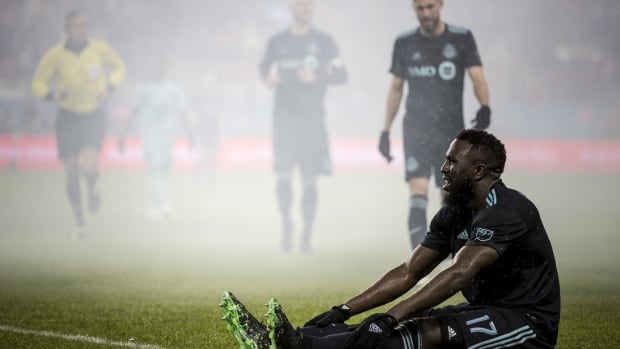 Toronto FC star striker Jozy Altidore apologized Monday for a post-game outburst in which he accused team president Bill Manning of letting his ego get in the way of player welfare.

Altidore left Toronto’s 4-3 win over Minnesota in the 82nd minute Friday night, complaining of hamstring tightness. The U.S. international laid into Manning after the game, saying the president’s ego was hurting player welfare by banning trainer Giuseppe Gueli because of his affiliation with the now-departed Sebastian Giovinco.

On Monday, Manning met with Altidore and then talked to reporters on a conference call, saying Gueli was back in the fold. Manning said his only issue with the Italian trainer was that he wanted to formalize their relationship so he was available to all players and not just a few.

“Jozy didn’t know that Giuseppe was going to be back,” said Manning, who put the Altidore outburst down to emotions running high in the wake of his early exit.

Altidore issued an apology to Manning and the soccer club soon after via social media.

“I let my emotions get the best of me when speaking to the media after our wild comeback win against Minnesota,” he wrote. “Bill and I connected this morning and I can confidently say we’re on the same page.

“I know Bill and Toronto FC are committed to pulling out all the stops and dedicated to putting the team in prime position to have a successful season. We move forward together.”

Manning downplayed the incident with Altidore, who leads the team in scoring with five goals this season.

“We’re close, we’re family,” Manning said. “He’s so important to the club. And his relationship and mine may actually become stronger through all this.”

Manning also revealed that Altidore’s injury was not serious.

“The MRI was very good. It’s going to be two to three weeks [out] … Certainly it’s nothing long-term and I think that was his fear in the moment. Mentally he kind of went through a tough spot,” said Manning.

Manning said he had met with the trainer on a recent scouting meeting in Italy and that Gueli would be back on a part-time basis, available to all players.

Still not a good look

The rift, however short, looks bad on a club whose motto is “All for One.” The 29-year-old Altidore may also not appreciate his team president comparing the incident to his son throwing a tantrum in the supermarket or a public place.

“You’re a little embarrassed. You get him kind of alone and you scold him a bit. But you still love him,” said Manning, continuing the analogy. “This morning when I met with Jozy I was frustrated that he came out as he did, but I love the guy. And once he had the information in terms on what I was working on with Giuseppe, he felt at ease.”

Gueli worked closely with Giovinco during his time with Toronto FC but also helped Altidore and Bradley, among others.

Manning said he notified Gueli in March that their past arrangement would not continue. But after meeting with Altidore and Bradley, he went back to Gueli to change their arrangement.

“Giuseppe was kind of on his own island a little bit and I said ‘If we’re going to doing this right going forward, I need you to be part of the staff, part of our team.’ … And he welcomed that,” said Manning.

Altidore was smoldering as he essentially lobbed a grenade into the Toronto dressing room after the Minnesota game. The burly forward, who has a history of hamstring problems, said Friday’s pain “could have been avoided” if Gueli was still there.

Altidore said he had been feeling the hamstring issue all week.