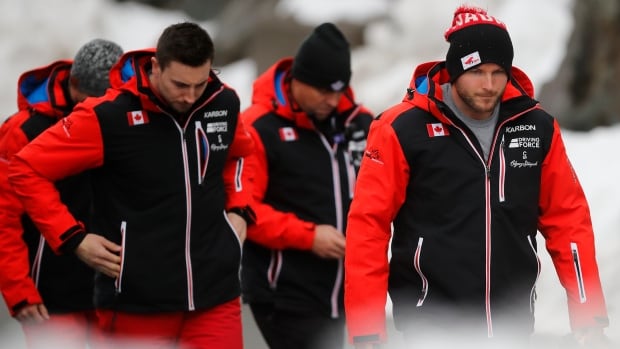 In a statement, Olympic champion bobsleigh athlete Justin Kripps says “all the returning national team members” he’s talked to feel they “train and compete in a safe and supportive environment.”

“In my 13 years in the sport I’ve never experienced a better culture than we’ve had over the last couple of years,” he said.

I can’t comment on the harassment case but <a href=”https://twitter.com/justinkripps?ref_src=twsrc%5Etfw”>@justinkripps</a> comments do resonate with returning athletes that are currently on the team. The culture on the team has had a remarkably different and upward tone since the 2017/2018 season.

“I can’t comment on the harassment case, but Kripps’s comments do resonate with returning athletes that are currently on the team,” Appiah posted.

“The culture on the team has had a remarkably different and upward tone since the 2017/2018 season.”

Hi Kelly. <a href=”https://twitter.com/justinkripps?ref_src=twsrc%5Etfw”>@justinkripps</a> comments were made on behalf of the entire returning athletes from the 2018/19 World Cup season. Both men’s and women’s teams would like to OUR experience.

Hays took over as head coach of the Canadian team beginning in 2017. Humphries claims it was during the 2017-18 season she was emotionally, verbally and mentally abused by Hays.

WATCH | Kaillie Humphries ready to move on from Bobsleigh Canada

CBC Sports’ Devin Heroux breaks down Kaillie Humphries’s decision to leave Bobsleigh Canada and the lawsuit she filed after having her request to be released denied. 2:05

She took last season off from competition awaiting a resolution on an internal investigation into her allegations being conducted by Bobsleigh Canada. The organization says it has yet to complete that investigation. Humphries has since been asked to be released from the team and says Bobsleigh Canada is blocking her from doing that – she plans to compete for the United States.

Humphries is now suing the sport organization. In court documents filed by Humphries and her legal team, she names Hays and outlines several occasions during the 2017-18 season when she claims the harassment occurred. Bobsleigh Canada has yet to file a statement of defence.

“After over an hour of verbal insults attacking me personally and professionally in a public place with people watching, I began to cry out of frustration, hurt feelings, and astonishment at what he was saying,” Humphries said in court documents.

Kripps says improving team cohesion and atmosphere has been a focus for the program and has helped lead to success.

“Working on our athlete-athlete and athlete-coach culture is something we feel is important and we’ve been working on for years,” Kripps said.

“Despite having over half the team be World Cup rookies last year, the athletes and coaches worked together and supported each other and it’s a big reason we’ve been experiencing the success we have been.”

Hays was coach of the U.S. women’s program from 2011 until 2014. He’s been head coach of Bobsleigh Canada for two years.

Humphries is suing Bobsleigh Canada to be released, claiming that she was in “an environment that is unsafe.” 2:54

USA Bobsled says Hays’s contract wasn’t renewed in 2014 after restructuring the program and consolidating the men’s and women’s teams for “better collaboration among the coaches.”

“That structure did not play to Todd’s coaching style,” said spokesperson Amanda Bird.

In a statement to CBC Sports, Bobsleigh Canada said it abides by its harassment and discrimination policy that has been in place since 2006.

Bobsleigh Canada says Hays will not be commenting on Humphries’s allegations.

“As the matter is before the courts there will be no comment from Todd Hays until this is wrapped up,” the organization said.

Humphries plans to compete for U.S.

Humphries now says she’d rather compete for the U.S. She is marrying American Travis Armbruster, a former brakeman on the U.S. bobsleigh team, on Saturday.

“Being put into an environment that is unsafe. It’s not okay, let alone I’m going to be punished just for stating that those facts are existing to me,” Humphries said.

Humphries says once she secures her release from Team Canada, she will begin her process to become eligible to compete for the United States.

International Olympic Committee (IOC) requirements dictate that an athlete changing countries “may participate in the Olympic Games to represent his new country provided that at least three years have passed since the competitor last represented [their] former country.”

She plans to attend a U.S. bobsleigh training camp in Lake Placid as a guest next week.