At the start of the month, Brett Kavanaugh came across as a devout Catholic with an unblemished personal record and golly-gosh stories about coaching his daughters' basketball teams. He had a mild way about him, and a near-certain chance of sailing to a confirmation to the highest court in the land.

By the end of Thursday's Senate judiciary committee hearing, the U.S. Supreme Court nominee, who is facing a handful of allegations that include sexual assault, would be shown in cable news clips snivelling, roughly flipping pages from his prepared statement, shouting during his opening testimony as he denied the allegations, and deflecting senators' questions about his alleged abuse of alcohol by challenging them about their own drinking habits.

His testimony came in stark contrast to the composed and considered testimony of Christine Blasey Ford, the California research psychologist and professor who on Thursday alleged to senators with "100 per cent" certainty that Kavanaugh tried to drunkenly rape her in the 1980s when they were both teens at a house party in Maryland.

"By everyone's account, she has been an outstanding witness … she was not evasive. She seemed forthright," said Stacy Hawkins, a professor at Rutgers Law School in New Jersey. "She was as credible as any witness could be, under the circumstances."

Senator Dick Durbin asks Christine Blasey Ford with what degree of certainty she believes it was Brett Kavanaugh who assaulted her in 1982. 0:47

Some in the gallery were reportedly brought to tears by Ford's testimony. On Fox News, host Chris Wallace commented that she sounded "extremely raw — and extremely credible."

Hawkins noted Ford offered at times to answer questions even when she could have claimed attorney-client privilege. Kavanaugh, on the other hand, appeared to be "hostile" and "extraordinarily rattled" by persistent questioning asking if he would press for a full FBI investigation into Ford's claims.

When Democratic Sen. Amy Klobuchar asked the judge if he had ever drunk to the point of losing his memory, he shot back: "Have you?"

He later apologized, but a line Kavanaugh kept falling back on probably didn't help.

He also said "I liked beer" and "We liked beer," and according to the transcript, declared "We drank beer" seven times.

"Do you like beer?" he asked a senator at one point.

(Watch: Kavanaugh gets combative when asked about his drinking)

U.S. Supreme Court nominee testifies that he does not have a drinking problem. 0:50

Mark Osler, a law professor at the University of St. Thomas in St. Paul, Minn., who attended Yale Law School with Kavanaugh and socialized with him, said in a phone interview that after Thursday's hearing, he believes his old peer's promotion is in greater jeopardy.

"He might be withdrawn," he said. "That's where we are right now."

Osler was among dozens of Kavanaugh's former classmates who signed a letter of support for him after his nomination. Osler has since withdrawn his support in the wake of the allegations.

He did stress that although he did "go to parties and drink with" Kavanaugh, he never saw any behaviour matching the kind of accusations that have been made against him.

Among Kavanaugh's mistakes on Thursday, Osler said, were his sharply partisan attacks in his opening testimony. He accused Democrats of an "orchestrated political hit, fuelled with apparently pent-up anger about President Trump … and revenge on behalf of the Clintons."

Kavanaugh worked on independent counsel Ken Starr's investigation of President Bill Clinton in the 1990s, and was known to have proposed the most sexually graphic questions to be asked of former White House intern Monica Lewinsky, with whom Clinton admitted to having an "inappropriate relationship."

Kavanaugh alluding to Clinton "revenge" didn't sound to Osler like the impartial thoughts of a jurist deserving of a spot on the Supreme Court.

"More than anything, what he needs to do is establish himself as someone who's telling the truth," Osler said. "If what he's saying is related to conspiracy theories, it's going to go the other way."

Sen. Dick Durbin asks Kavanaugh repeatedly if he thinks an FBI investigation should be held. 5:30

A stream of Republican senators defended Kavanaugh and ripped Democrats for what they portrayed as 11th-hour tactics to derail the Supreme Court nomination of a respected conservative judge. During Kavanaugh's testimony, Republican Lindsey Graham slammed his Democratic colleagues for carrying out what he called "the most unethical sham" he's ever witnessed in his political career.

Kavanaugh's angry indignation appeared to please U.S. President Donald Trump, who tweeted his support for the nominee and repeated Kavanaugh's "search and destroy strategy" line, calling the nomination process "disgraceful." Kavanaugh's combative testimony might also resonate with Trump's base, and Republicans have learned it may not be politically wise to cross the president.

Judge Kavanaugh showed America exactly why I nominated him. His testimony was powerful, honest, and riveting. Democrats’ search and destroy strategy is disgraceful and this process has been a total sham and effort to delay, obstruct, and resist. The Senate must vote!

Democratic strategist Karl Frisch said Kavanaugh's performance was an attempt to convince Trump not to pull his nomination.

"Seems clear Kavanaugh is testifying AT Trump and not the Senators in the room," Frisch wrote on Twitter. "His anger as an appeal to Trump. It is this type of outrage that really reaches Trump."

Seems clear Kavanaugh is testifying AT Trump and not the Senators in the room. His anger as an appeal to Trump. It is this type of outrage that really reaches Trump.

The hearing began with an unusual format that didn't seem to work very well for the Republicans.

Normally, the two parties would take five-minute turns asking a witness questions. But the Republicans opted to cede their time to Rachel Mitchell, a sex-crimes prosecutor they hired to ask questions on their behalf, apparently aware of the bad optics of an all-male, all-white group of Republicans grilling a female survivor of sexual assault.

"Their strategy of using Mitchell was terrible. Any lawyer engaged in a line of questioning gets a rhythm going with the witness. Interrupting her and telling her she had to stop every five minutes was very unexpected to her, and you could see it." 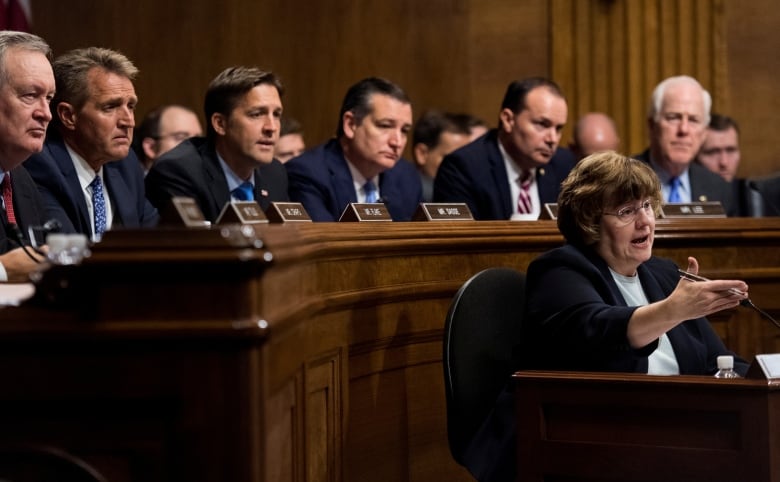 It was difficult at times to grasp where Mitchell's questions were heading. During the morning session, she quizzed Ford about her fear of flying, apparently attempting to cast doubt on her credibility by pointing out she has flown to holiday destinations despite her claimed aversion to air travel.

By the late afternoon, midway through Kavanaugh's testimony, Republicans abandoned the tactic of ceding their speaking time to Mitchell. Several of them took the opportunity to attack the behaviour of their committee rivals.

Kavanaugh seemed to set the new tone with his angry opening statement that admonished the Democrats for "destroying" his family and reputation.

"It was not a good look to be coming out screaming," Tucker said. "I was shocked. I don't think that shows judicial temperament."

And certainly not, she said, given the portrayal of Kavanaugh in press reports as a "sloppy drunk" who could be aggressive or belligerent when inebriated.

Republican senators Lisa Murkowski and Susan Collins might have the final say on whether Kavanaugh's approach was successful. Both are considered potential swing votes, but Republicans can only afford to lose one vote to confirm Kavanaugh, given the party's 51-49 edge in the upper chamber.

Tucker believes that even if Republicans feel they'll be able to scrape together enough votes to confirm Kavanaugh, the judge's confidence has been shaken and his name tarnished.

"Whether or not Kavanaugh is confirmed," she said, "you'll never be able to Google his name without this coming up."