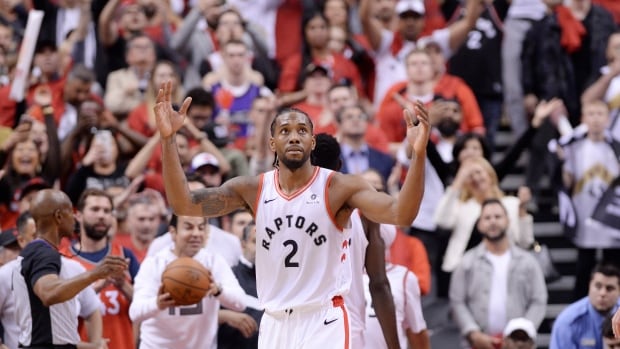 By the time a wobbly Kawhi Leonard made his final field goal, the game was almost an hour old. More than three hours in real time. Kyle Lowry had long ago fouled out. Norman Powell was also gone.

It was a war of attrition. Last man standing. And one of the Raptors’ best team efforts of these playoffs.

Leonard scored 36 points, including eight in the second overtime period, to lift the Raptors to a 118-112 thrilling victory over the Milwaukee Bucks, throwing Toronto a lifeline in the Eastern Conference finals.

“We played with a much tougher mindset,” Raptors coach Nick Nurse said. “We were kind of gritty and we didn’t really have much choice there. Those guys had to roll those minutes and they kept on playing and fighting and doing everything they could to keep us in the game.”

The Raptors trail Milwaukee 2-1 in the best-of-seven series heading into Tuesday’s Game 4.

Pascal Siakam had 25 points and 11 rebounds, Marc Gasol bounced back from a horrible Game 2 to score 16 points and grab 12 rebounds, Powell scored 19 points off the bench, and backup guard Fred VanVleet, seldom-used this post-season, had six assists in a solid 31 minutes, despite taking an elbow to his lower eyelid that required post-game stitches.

Kawhi Leonard finished with a game-high 36 points as the Toronto Raptors beat the Milwaukee Bucks 118-112 in Game 3 of the Eastern Conference Final. 3:03

“Those guys came in and just fought the whole game,” Siakam said. “That’s what we did all season. We always had that mentality. Just being at this moment, the highest stage, and having those guys step up. Sticking together at the end there when we could have gotten down on ourselves, but we didn’t.”

Lowry, playing with a taped sprained left thumb, had 11 points, five assists and four rebounds before fouling out midway though the fourth quarter.

Danny Green had just three points on 1-for-9 shooting, but played a huge role on the defensive end.

Leonard, who missed all but nine games last season in San Antonio because of a serious quadriceps injury, logged a playoff career-high 52 minutes, and was a perfect 3-for-3 shooting over the nailbiting final five minutes including a massive dunk in which he took of from near the top of the key.

“It’s amazing,” Powell said of Leonard. “He’s a guy that all he wants to do is win. He doesn’t care about accolades, the points. We feed off of that. He’s a great leader for us.”

The 27-year-old superstar appeared to be limping for much of the night, and after post-game treatment told reporters: “I’m good. I’m just going to keep fighting and be playing.”

As the minutes ticked on, and the tension rose, the level-headed Leonard kept the team calm.

“To be able to go out there and play 52 minutes and lead the team with his voice in the timeouts, telling us to stay calm, stay in the moment, not get anxious — it’s amazing to have a guy like that on the team,” Powell said.

The game was up against the series finale of HBO’s blockbuster hit “Game of Thrones,” and fans flocked to Twitter to virtually crown Leonard “the King in the North.”

Giannis Antetokounmpo had 12 points and 23 rebounds before fouling out in the second overtime period. George Hill had 24 points to top the Bucks.

The Raptors led for most of the night, going up by double digits in the first quarter and responding to every Bucks run. But they managed just nine points in the third quarter, and when Hill hit a floater with 12.7 seconds left in the frame, the Bucks pulled to within 77-75 with one quarter left to play.

Lowry and Leonard had back to back three-pointers that put the Raptors ahead by eight with 9:05 to play. Five straight points by Antetokounmpo pulled the Bucks within four, but when the “Greek Freak,” who’s the front-runner to win the season’s MVP award, missed badly on a free throw, the crowd chanted “Air ball!”

Stars on and off the court

“Those are shots that you practise and you think about every day,” Siakam said. “At that moment, you’re kind of mad at yourself. My teammates did a good job of just calming me down.”

Khris Middleton scored with 2.2 seconds to play. There were no end-of-regulation heroics this time for Toronto as Siakam missed on a long jumper to send the game into overtime.

Green’s three with 3:32 left in the first overtime, his first make of the game, had Toronto up by three. Baskets by Siakam and Leonard gave Toronto a four-point cushion before Brogdon, with a basket, and Hill, with two free throws, tied it up with 14.5 seconds to play. Leonard’s basket at the buzzer bounced off the rim, sending it to double OT.

Antetokounmpo, who was double-teamed all night, fouled out with 4:24 left in the second OT.

“Obviously they changed their matchup,” the Bucks forward said. “I tried not to think about it too much, but whenever I tried to make a play, I saw they were showing bodies, they were sending a second guy there.”

A Gasol three and Leonard dunk off a Green steal had the Raptors up by three. Then, leading by a point, Leonard had a steal and dunk and it was a two-point game with a minute to play. A big Siakam block led to a Leonard basket, the Bucks turned over the ball and it was game over.

Nurse showed faith in his starters

Despite pre-game talk of changes to Toronto’s starting lineup, Nurse stuck with his same five. It proved to be a smart choice, as Gasol, who struggled mightily in Game 2 and shot just 2-for-9 from deep through the first two games, connected on his first two three-point shots. The Raptors raced out to an early 11-point lead and took a 30-21 advantage into the second.

The Bucks pulled to within three points midway through the second, but a Lowry three-pointer capped a 12-4 Toronto run that restored the Raptors’ 11-point cushion. Serge Ibaka hit a three-pointer with 1.1 on the clock to send Toronto into the halftime break up 58-51.

The emergence of Powell, who had 14 points in Game 2, is good news for the Raptors, whose bench has been terrible throughout the post-season.

“He’s just been good at both ends,” Nurse said before the game. “I think it’s just a type of game that it is and the type of player he is. He’s fast, he’s athletic, he’s played aggressive. When the ball has swung around to him, he vaults up like he’s going to make them. There’s no hesitancy there, and he knocks them down.”

The Raptors dropped a narrow 108-100 decision in Game 1, leading for 37 minutes before falling apart in the fourth quarter. In Game 2, they were destroyed virtually from the opening tipoff, falling behind 9-0 in the first two minutes and trailing by as much as 28 points en route to a 125-103 loss.

No NBA team has come back from 0-3 deficit

A loss would have been a horrible result for Toronto. Historically, teams that have led 2-0 went on to win seven-game series 94 per cent of the time. But of the exceptions: the Cleveland Cavaliers trailed Boston 0-2 in last year’s Eastern Conference finals before winning the series.

The Raptors have never won a series after falling behind 0-2, but have twice tied up the series, in 2016 against Cleveland and 2002 versus Detroit.

Awaiting the winner is either the Golden State Warriors or Portland Trail Blazers. The Warriors can sweep Portland with a victory on Monday, giving them more than a week’s rest before the NBA Finals tip off.