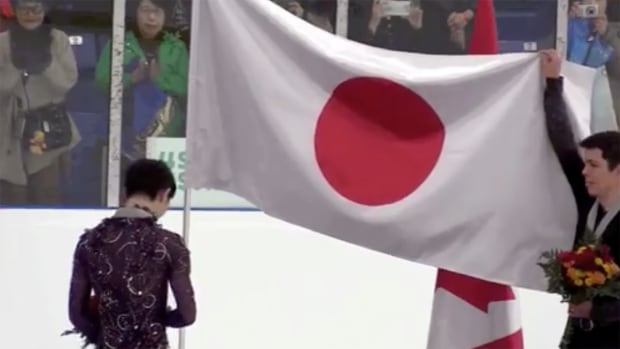 Keegan Messing might be the most beloved person in Japan right now.

The figure skater made the ultimate Canadian gesture Saturday when he held up the Japanese flag for fellow competitor Yuzuru Hanyu during the medal ceremony at the 2019 Autumn Classic International in Oakville, Ont.

When the national anthem of Japan started to play for gold medallist Hanyu, Messing noticed there was no flag display – so he made his own. He unfurled the Japanese flag behind the podium and held it up while Hanyu faced it for the duration of the anthem.

Canadian figure skater Keegan Messing turns from the podium, as the Japanese anthem starts, and unfurls the flag for Yuzuru Hanyu at a lower-level event in Canada today. Messing holds the flag for the duration so Hanyu can face it. <a href=”https://t.co/CUaaB6kJOl”>pic.twitter.com/CUaaB6kJOl</a>

Hanyu, who was grateful for the kind gesture, bowed to thank Messing after the anthem while the crowd cheered.

The annual Autumn Classic International is a stop on the ISU Challenger Series and features senior athletes from around the world. The event is designed to allow skaters to compete on an international stage prior to the start of the Grand Prix season.

Messing won bronze at the event with a total of 256.02 points and debuted his new short program featuring the song Perfect by Ed Sheeran. On the Player’s Own Voice podcast, Messing said the song is close to his heart because it was he and his wife’s first dance when they got married in August.

“It’s the first time in my singles competitive career that I did not feel alone on the ice while I was performing. It was almost like I was in a trance,” Messing said.

Canada’s Conrad Orzel also had a strong showing at the event, finishing sixth with 214.98 total points. Orzel made his senior international debut last February at the 2019 Bavarian Open where he won the silver medal.

Canada’s Piper Gilles and Paul Poirier kept the momentum going from their strong season in ice dance last year, finishing first on Saturday with 202.49 total points. That was more than 18 points ahead of silver medallists Lilah Fear and Lewis Gibson of Great Britain.

Canada’s Carolane Soucisse and Shane Firus also had a hot start, sitting second after the rhythm dance portion but slipped to fifth after the free dance when Firus fell at the end of the twizzles section. The pair finished with 172.90 points.

On the women’s side, Japan also came out on top of the podium with Rika Kihira winning the gold in just her second season on the senior circuit. Russian Olympic silver medallist Evgenia Medvedeva finished second with 217.43 total points and is still looking for her first international win since November 2017. Canada’s Michelle Long and Veronik Mallet finished eighth and 12th respectively.