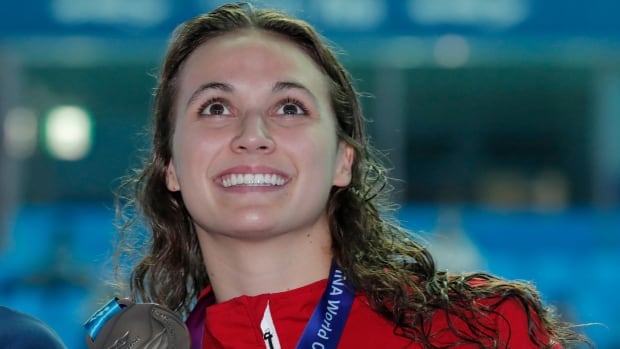 Kylie Masse earned her second medal of the swimming world championships on Saturday and reached a couple of Canadian records in the process.

Masse, 23, of LaSalle, Ont., took bronze in the 200-metre backstroke with a time of two minutes 6.62 seconds at the meet in Gwangju, Korea.

American Regan Smith ran away with gold at 2:03.69 one day after setting the world record at 2:03.35, and Australia’s Kaylee McKeown earned silver after clocking 2:06.26.

The bronze medal for Masse marked Canada’s seventh podium at the pool, surpassing the national record of six set in 1978. It was also Masse’s third career individual medal at worlds, which matches Sydney Pickrem for most all-time among Canadian women.

“I can’t complain,” said Masse. “The time is not as fast as I’ve been but I’m really happy to be on the podium. I’m super happy for Regan and I think it will only push the backstroke field even faster.”

Canada now has two gold and five bronze in the pool this week as well as an open water bronze last week for Eric Hedlin.

Pickrem’s record was fresh after she won bronze in the 200 breaststroke on Friday for her second medal of the 2019 meet and third overall. Earlier, Masse won gold in the 100 backstroke to defend the title she also won in 2017 with a then-world record. The University of Toronto product was also part of the bronze-medal mixed 4×100 medley team in 2017.

Masse’s four overall medals ties her with Penny Oleksiak for the most all-time among Canadian women at worlds too. However, all of Oleksiak’s honours have come via relay.

Oleksiak had the chance to pass Masse once again, but Canada just missed the podium in fourth place at the mixed 4×100 freestyle relay. Oleksiak swam a lifetime best anchor leg of 52 seconds flat, but it wasn’t enough to make up for a slow start from Yuri Kisil and Markus Thormeyer. Taylor Ruck helped push Canada up the standings in the third leg.

Oleksiak’s split would’ve been enough to win gold in the individual 100 freestyle.

“‘Everyone did a really good job,” said Kisil. “I just know from my own swim there’s a lot I can improve on. It wasn’t the greatest time. I’m just proud of everyone stepping up.”

“We tried to race to the best of our abilities,” added Ruck. “It was hard, there was a huge waves from both sides and I thought we handled it well.”

The United States, however, did set a world record of three minutes and 19.40 seconds.

The quartet of Caeleb Dressel, Zach Apple, Mallory Comerford and Simone Manuel helped the U.S. better their own world record of 3:19.60 set en route to the 2017 world title in Budapest.

Katie Ledecky won her first gold medal in her final event of an illness-plagued world swimming championships, rallying on the last lap to claim the 800 freestyle on Saturday.

Ledecky turned on the jets and completed the last lap in 29.19 seconds to Quadarella’s 30.76.

Ariarne Titmus of Australia earned bronze in 8:15.70. Titmus stunned Ledecky to win the 400 free on the first night before the American got sick and withdrew from the 200 free preliminaries and 1,500 final.

Meanwhile, Caeleb Dressel asserted himself as the world’s fastest man in the pool.

The American won the 50 freestyle, completing a 50-100 freestyle sweep and earning his fourth gold and fifth medal overall.

Dressel zipped from one end of the pool to the other in 21.04 seconds, bettering the championship record of 21.08 set by Brazil’s Cesar Cielo at the 2009 worlds in Rome during the height of the rubber suit era.

Bruno Fratus of Brazil and Kristian Gkolomeev of Greece tied for silver in 21.45.

Coming back just 34 minutes later, Dressel won the 100 fly in 49.66 a night after breaking Phelps’ world record in the semifinals.

Dressel has six golds and seven medals overall with one night remaining in the meet. He tied Michael Phelps’ record of seven medals — all gold — at a single worlds in 2017.

Australian swimmer Shayna Jack tested positive for a banned substance she says she did not knowingly consume but which forced her withdrawal before the world championships.

She has been notified of the result following an out-of-competition drug test June 26, Swimming Australia said Saturday. She was suspended from the Australian team and sent home from its pre-worlds training camp in Japan.

“I did NOT take this substance knowingly,” she wrote on Instagram. “Swimming has been my passion since I was 10 years old and I would never intentionally take a banned substance that would disrespect my sport and jeopardize my career.”

Jack said she and her team are doing everything they can to find out when and how the substance “has come into contact with my body.”

The 20-year-old swimmer initially cited personal reasons for her sudden withdrawal from worlds, and Swimming Australia had declined to elaborate.

The matter figures to embarrass the Australian team, some of whom have been critical of FINA’s handling of doping matters.

Australian Mack Horton snubbed Sun Yang on the medals podium after finishing second to the Chinese star in the 400-meter freestyle. Horton is angry that FINA allowed Sun to compete at worlds before his hearing before the Court of Arbitration for Sport involving a clash with drug testers.