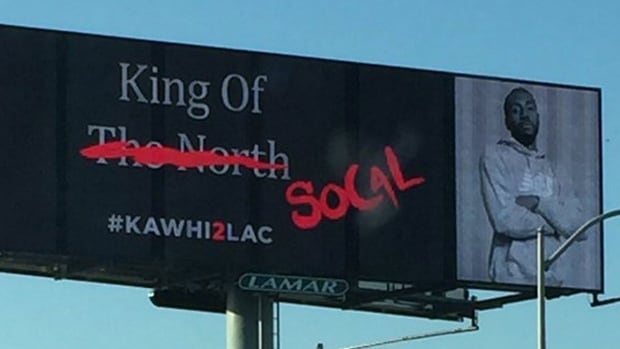 A billboard near Los Angeles urges NBA Finals MVP Kawhi Leonard to abdicate his “King of the North” throne in Toronto and become the “King of SoCal” with the Clippers.

With free agency set to begin this Sunday, two digital billboards along Interstate 5 in Downey, Calif., are encouraging the Raptors forward to sign with Los Angeles.

One features an image of a personalized California license plate that reads “KAWHI,” with the hashtag #ClipperNation. The other reads “King of SoCal” and has the hashtag #KAWHI2LAC.

A Clippers spokesman said the team had nothing to do with the billboards, located about 16 kilometres (10 miles) from Staples Center. It could be seen as tampering if the organization was involved, as the three-time all-star is still under contract with Toronto.

Leonard, who turns 28 on Saturday, is expected to decline his player option with the recently crowned NBA champs for 2019-20. The Clippers have a projected $ 52 million US in cap space and are expected to be among several teams seeking his services. July 6 is the first day of the signing period.