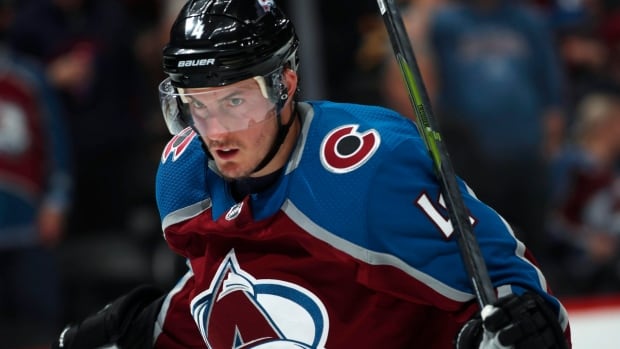 The Toronto Maple Leafs announced on Monday that the club has acquired defenceman Tyson Barrie, forward Alex Kerfoot and a sixth-round pick in the 2020 NHL draft from the Colorado Avalanche via trade.

Colorado will retain 50 per cent of Barrie’s average annual value ($ 5.5 million US) as part of the transaction.

The 27-year-old Barrie dressed in 78 games for the Avalanche during the 2018-19 season and registered 14 goals and 59 points, which ranked seventh among NHL defencemen.

In 484 career regular season games, all with Colorado, the Victoria native has produced 75 goals and 307 points.

Barrie was originally drafted by Colorado in the third round (64th overall) in 2009.

Kerfoot, from Vancouver, was originally selected by New Jersey in the fifth round (150th overall) in 2012 and signed a two-year, entry-level contract with Colorado in Aug. 2017.

Kadri, 28, had spent his entire career with Toronto after being selected by the organization seventh overall in 2009.

‘Nazem is a proven goal scorer’

“Nazem is a proven goal scorer and a fierce competitor who plays in all situations,” said Avalanche general manager Joe Sakic. “He is under contract for the next three seasons and will immediately fit right in as our second-line centre and improve our scoring depth.”

Rosen, 25, has split the last two seasons in the Toronto organization between the Leafs and American Hockey League Marlies.

Rosen, signed by Toronto as a free agent in May 2017, has recorded one goal and one assist in eight career NHL games.

He spent parts of five seasons playing professionally in his native Sweden before joining the Leafs.

“Calle is a young defenseman with upside who has played in the AHL and has also seen some NHL time over the last two years,” said Sakic.

“With the arrival and emergence of (defencemen) Samuel Girard and Cale Makar, as well as the recent draft pick of Bowen Byram, we felt it was time to move in this direction with Tyson’s contract expiring next summer.”

Opened day with series of moves

Earlier in the day, the Maple Leafs signed veteran centre and local product Jason Spezza to a one-year contract worth $ 700,000.

The 36-year-old is expected to fill a role for a young, talent-filled team that has lost to the Boston Bruins in the opening round of the playoffs the last two springs.

Toronto also swung a trade about three hours before free agency opened at noon Eastern, shipping defenceman Nikita Zaitsev and forward Connor Brown to the Ottawa Senators for blue-liner Cody Ceci in a six-player deal that should help the salary cap-squeezed Leafs in their efforts to sign restricted free agent winger Mitch Marner.

Zaitsev was on the books for $ 4.5 million for the next five years, while Brown is scheduled to make $ 2.1 million in 2019-20. Ceci, an RFA with arbitration rights, made $ 4.3 million last season and can become an unrestricted free agent next summer.