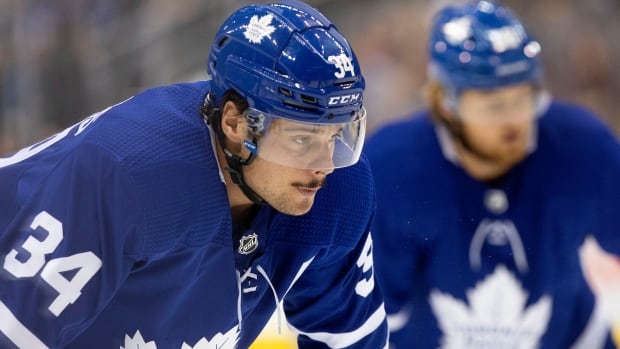 Moments after Auston Matthews delivered a 38-second statement where the Toronto Maple Leafs’ star said he regrets if any of his actions are a distraction to the team, John Tavares was asked if that’s exactly what’s happening.

“Well, we’ve got a lot of people here today,” said the veteran centre. “But we’re focused on the ice.”

The media throng assembled at the Leafs’ practice facility had other ideas Wednesday, less than 24 hours after news broke that Matthews is facing a charge of disorderly conduct and disruptive behaviour stemming from an alleged May incident in his hometown of Scottsdale, Ariz.

Having dozens of reporters and cameras on hand for the morning skate wouldn’t raise eyebrows in the playoffs, but this was ahead of an exhibition game in late September against a skeleton Montreal Canadiens’ roster.

Any controversy involving the Leafs is big news in Toronto — Matthews made the front page of the local daily newspapers Wednesday — and the added detail that the team’s best player has been charged days before many observers expected him to be named captain has sparked even more intrigue.

One of the first players off the ice Wednesday, Matthews briefly went into the locker room and emerged after a member of the Leafs’ public relations staff said the 22-year-old centre wouldn’t be taking any questions.

“It’s not something that I think any of us really wish we were talking about today. Unfortunately, it’s the situation we’re in,” said Matthews, still sporting his equipment. “I regret any of my actions that would ever put a distraction on the team or distress any individual.

“I take a lot of pride in preparing myself for the season and representing the Toronto Maple Leafs as well as I can. Unfortunately due to the situation, I’m afraid I can’t really make any other comments.”

Hearing in Arizona today over incident with security guard. 2:27

Tavares, Leafs head coach Mike Babcock and defenceman Morgan Rielly all said they first learned of the allegation Tuesday. It’s unclear if anyone in the organization knew about the charge before this week.

“You’re always disappointed,” Babcock said. “As the Toronto Maple Leafs, we really pride ourselves on doing things right — on the ice, off the ice — in treating people.

Rielly said the team will rally around Matthews.

“It’s tough,” he said. “He’s taking it very seriously. We understand that these issues are serious and it’s not something that we take lightly.”

A pre-trial conference was held in Arizona on Wednesday. The City of Scottsdale’s website lists the next court date as Oct. 22.

NHL deputy commissioner Bill Daly declined a request via email for comment when asked about the allegation. The player’s agent and Phoenix-based lawyer also didn’t respond to separate requests for comment.

A police report obtained from the Scottsdale Police Department details the complaint filed by a female security guard employed by a local condo building where she said Matthews is a resident. She said she was sitting in her locked car when a group of men, including Matthews, allegedly tried to get inside on May 26.

She said she confronted the group, who she believed to be intoxicated, and during that interaction Matthews withdrew from the conversation and dropped his pants and grabbed his butt cheeks.

The security guard said Matthews, then 21 years old, kept his underwear on.

None of the allegations have been proven in court. Matthews was not arrested.

The coach added that he spoke to Matthews, who was expected to play against Montreal, on Wednesday morning to make sure the fourth-year pro was OK.

Rielly was wrongly accused of uttering a homophobic slur on the ice during a game last season, and said the attention controversial situations garner in hockey-crazed markets can be difficult to handle.

“You just try not to read about it,” Rielly said. “We know Auston, what kind of person he is and how he acts on a day-to-day basis. This doesn’t change things for his teammates.”

Matthews has been considered one of the leading candidates to be the named Leafs’ captain, a role that’s been vacant since Dion Phaneuf was traded to the Ottawa Senators in February 2016.

Tavares and Rielly are also possibilities for the job — it’s anyone’s guess what the allegation means for Matthews’ case to wear the ‘C’ — but they said his position within the team hierarchy is secure.

It was hard not to notice, however, the captain-like poise both showed Wednesday morning under difficult circumstances.

“It’s easy to cast judgment and want to make assumptions, but I think you just let the process carry out,” Tavares said. “We have belief in (Matthews) as a player and what he brings to our locker room.”

“He’s been a leader since Day 1 (when) he walked in this room,” Rielly said. “We’re going to support him.”