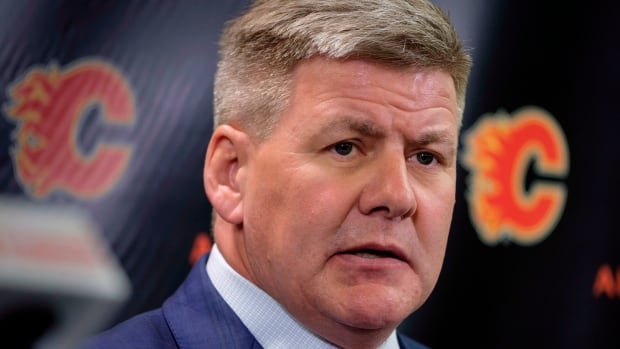 A sports legal analyst believes the challenge facing the Calgary Flames is whether they can fire Bill Peters for just cause for comments the team’s head coach is alleged to have said.

Peters has been accused by former player Akim Aliu of using racial slurs 10 years ago in an American Hockey League locker room when Aliu was a player for the Rockford IceHogs team Peters coached. Both the Flames and the NHL are investigating the allegations.

CBC Sports contacted Eric Macramalla, a partner with Gowling WLG, who says the difference between just cause and without cause is likely worth millions to the franchise. Peters is in the second year of a three-year deal that is worth a reported $ 6 million US, according to the website Capfriendly.com.

CBC Sports: What was your initial reaction from a legal perspective?

Eric Macramalla: “My mind immediately went to, this is going to be a process for Bill Peters that may well end up with Bill Peters being terminated by the Calgary Flames. Any time there’s an allegation involving the N-word, which is so profoundly offensive to so many people, it typically doesn’t end well, particularly when you are dealing with what is effectively in the NHL a billion-dollar business where teams are beholden to fans and stakeholders and sponsors and suite-holders and other business partners. So, when someone uses that word it really triggers what is going to be a very difficult road for Bill Peters.”

CBC Sports: The Flames have continually said they’re not making any decision until they complete their investigation – many people are wondering why the delay? What does the team have to consider?

Macramalla: “What the Flames are doing is absolutely by the employment law handbook. The first thing you do when these allegations are presented to you is you recognize that they’re merely allegations. So, first thing you do is initiate an investigation. That’s been done. If the allegation is so potentially offensive, then what you do is you put that employee on leave. Well that’s happened to Bill Peters. But ultimately the Flames are doing this the right way because they have to determine as best they can whether Bill Peters used the N-word 10 years ago. They simply can’t assume the allegations are true. They must do their due diligence. That is what they are doing. So, to me, the Calgary Flames should be applauded because they are following a process.”

CBC Sports: Who would the Flames want to be talking to?

Macramalla: “They want to try and interview some of his teammates. The Calgary Flames as well will be talking to the NHL and commissioner Gary Bettman and Bill Daley, the deputy commissioner. Why? Because ultimately this is going to come down to a business decision as to whether you keep Bill Peters or not. Because if the Flames discover that Bill Peters used the N-word, and it appears that Bill Peters has admitted to using it in his written apology, then to keep him as the head coach will have an adverse business impact on the Flames and the NHL.”

Calgary Flames head coach Bill Peters has come under fire after former player Akim Aliu accused the coach of using racial slurs towards him years ago. 2:11

CBC Sports: Does Bill Peters’ apology letter help him or hurt him? He did not apologize to Akim Aliu, why?

Macramalla: “For me, it was ill-conceived and it was ill-advised. I don’t think in the midst of an employment investigation you make any public declarations with respect to whether you did or did not do something. Your lawyer can communicate behind the scenes with the Flames and the NHL, but there is very little to be gained by posting a letter online because when you do that you simply open yourself up to social media scrutiny which as you know can be an absolute disaster.”

CBC Sports: What’s at stake here for the Flames and the NHL?

Macramalla: “I want to be clear about something because there is a misconception out there that the Calgary Flames cannot fire Bill Peters right now. As I’m talking to you, yes they can. But what they want to assess are two things: One, did Bill Peters say what is being alleged? Well, it appears as though he’s conceded that. The second thing is a legal issue — firing him without cause versus just cause. If the Flames fire him without cause, they own what’s left on his contract. So, that’s what they’re trying to assess here. Can they fire him with cause? It’s difficult. It’s a bit of a challenge because just cause is a really high bar. Things that might constitute just cause are showing up to work drunk, or being late on a regular basis, or sexually harassing your colleagues. These are statements made 10 years ago when employed by somebody else. The Flames have to argue that those comments, while 10 years old, bring the Flames organization today into disrepute. That’s what the Flames are looking at right now.”

CBC Sports: What precedent could this set and do you believe the Flames will fire Bill Peters?