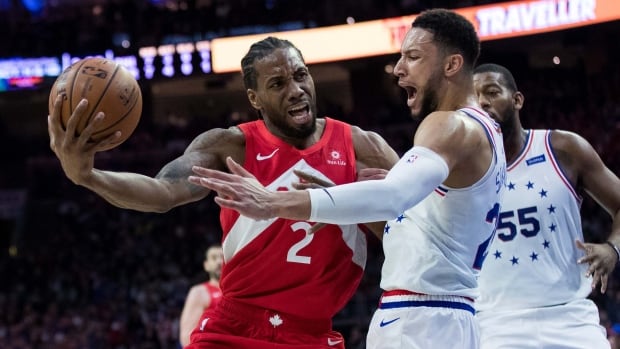 Kawhi Leonard swung right off a switch and launched a three-pointer over Sixers giant Joel Embiid that dropped just as the shot-clock buzzer sounded.

The steely-nerved superstar finally got some help from his Raptors teammates on Sunday, then drained the dagger three-pointer with 1:01 to play that lifted Toronto to a grind-it-out 101-96 victory over the Philadelphia 76ers on Sunday.

Now the Raptors head back to Toronto for Tuesday’s Game 5 of their best-of-seven Eastern Conference series all tied up at two wins apiece.

“They ended up switching,” Leonard said on his big shot. “Embiid is a good defender, long. So at the time I just looked up at the shot clock and tried to get as much space as possible and just took a shot and believed that it was going to go in. And it did.”

Leonard, who’s having one of the most efficient playoff series in NBA history, had 39 points on 13-for-20 shooting in 42 minutes and grabbed a team-high 14 rebounds. He’s averaging 38 points on a sizzling 62 per cent shooting through four games, and has totalled 152 points.

But his teammates were as much the story in Sunday’s win. For the first time in a couple of games, Leonard didn’t have to do it alone. Marc Gasol had 16 points, Kyle Lowry had 14, Serge Ibaka chipped in with 12, and Danny Green had 11.

“We needed some punch around the roster,” Raptors coach Nick Nurse said. “It was a different mentality. Guys were looking to shoot, taking the first shot that was there.”

Lowry, Gasol and Ibaka had been a horrible 4-for-22 combined in Game 3.

A day after he was listed as doubtful with a calf injury, Pascal Siakam started for the Raptors, but the lingering injury seemed to affect his shooting — the team’s second-leading scorer in the post-season went 2-for-10 for nine points.

“Tonight we all kind of stepped up a little bit more,” Lowry said. “Pascal was big, Pascal playing hurt and toughing through, we knew everybody had to step up . . . we’ve got to take the shots that are there, they’re a swarming team and when they swarm we’ve got to make them play, and we made some big shots tonight.”

Sixers coach Brett Brown said Embiid texted him early in the morning saying he wasn’t sure if he could play because of a virus.

“To his credit, he willed his way through it,” Brown said.

Lowry and the Raptors traditionally bounce back after big losses, and there’ve been few bigger losses than Thursday’s 116-95 rout that set up Sunday as virtually a must-win matchup, and one of the most important games in franchise history.

After two straight years of being ousted in the conference semifinals, so much is riding on this series, including Leonard’s future in Toronto.

The Raptors, who hadn’t lost three straight since Nov. 12-16, revved up their intensity from the get-go, particularly on the defensive end, assembling an 11-point first-quarter lead.

Lowry’s increased intensity was noticeable when he blew past Ben Simmons and fed Ibaka for a first-quarter dunk. A Raptors fan stood in the arena’s aisle and rocked an imaginary baby two days after a showboating Embiid did the same thing.

“I know what my team needs and I haven’t given it to them, in Game 3 I didn’t give it to them and tonight was a more assertive me, more of an effort to go out there and try to go be more aggressive,” Lowry said. “The aggressive me is what we need.”

The Sixers took their first lead since early on a minute into the third quarter and would go up by five in front of a raucous capacity Wells Fargo Center crowd of 20,639 fans that included Julius (Dr. J) Erving, retired NFL star Terrell Owens, and Philadelphia Eagles quarterback Carson Wentz.

But the Raptors responded. And when Lowry dished to Siakam for a dunk, the power forward’s first field goal of the game, it capped a 7-0 Raptors run and put Toronto back up with 4:15 left in the third quarter.

The fourth quarter started all tied up at 75-75.

Over the final nailbiting 12 minutes, Butler banked in a three-pointer to put the Sixers up by three. The Raptors replied with 6-0 run before a Redick three-pointer sliced Toronto’s advantage to just a point with 2:07 left. Then Leonard launched his three as the shot-clock buzzer sounded, putting Toronto up by four points and all but clinching the victory.

Game 6 will be back in Philly next Thursday. The series would return to Toronto for Game 7 if necessary.

Nurse matched the Sixers’ size in Game 4 by playing both Gasol and Ibaka together for significant minutes, an adjustment that proved effective.

“It was one of those nights where we didn’t try to make it look pretty. We had to try to grind, man,” Ibaka said. “I don’t care if we didn’t have space tonight. We tried to grind on the defensive end and on offence just play basketball.”

The Sixers would need to win at least one game in Toronto to clinch the series.

“We got humbled,” Butler said.

The Raptors, who were the best three-point team in the league heading into the post-season, shot just 2-for-11 from long distance in the first quarter, but still went up by 11 eight minutes into the game. They took a 24-21 advantage into the second.

Toronto continued to struggle from outside in the second, shooting 3-for-10 on threes. The Sixers pulled to within a point several times in the second, and Butler hit a three with 0.4 seconds on the clock to make it a 47-45 lead at halftime.

A loss Sunday would have been a massive blow. Only 11 teams in NBA history have won a playoff series after falling behind 3-1, including the Cleveland Cavaliers who clawed their way back to beat Golden State in the 2016 Finals.