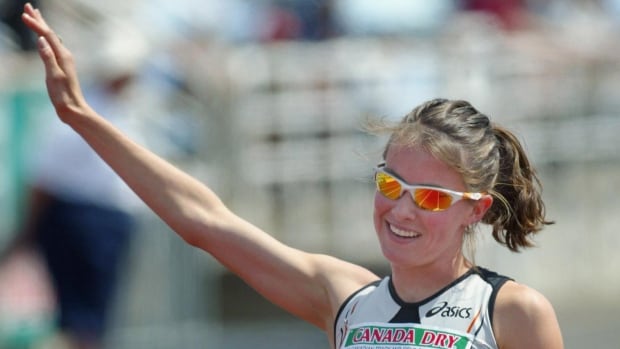 Malindi Elmore crushed the Canadian women’s marathon record on Sunday, all but booking her spot on the team for the 2020 Tokyo Olympics.

A trip to Tokyo would be 16 years between Olympics for Elmore. She ran the 1,500 metres at the 2004 Athens Games, then retired from track and field disheartened after missing both the 2008 Beijing and 2012 London teams.

With her husband Graham Hood — a two-time Olympian on the track — writing her training program, she made her marathon debut at the same Houston race a year ago. Her time of 2:32.15 told her an Olympic spot was there for the taking.

“I realize I have this narrow opportunity to do something really cool again in sport. If I went back [to the Olympics], I think it would be the most incredible full circle I could have, after 16 years of a lot of highs and a lot of lows — and then just somehow to have it come together would be amazing,” she told The Canadian Press last July.

She’d planned on racing the Scotiabank Toronto Waterfront Marathon in October, but was forced to withdraw with an injury.

Elmore missed the semifinals of the Athens Olympics by one spot. Either injuries or missed qualifying standards would keep her out of the next two Olympics.

She switched to the triathlon, and her Ironman time of 8:57:22, set in Arizona in 2016, was the fourth fastest in Canadian history.

While most runners move up to the marathon, Elmore had a big physical and psychological advantage moving down from the Ironman.

“Definitely the mentality [from triathlon] helps, the mindset. I left the race feeling there was a lot more in the tank, and it was a really positive experience and I had really enjoyed it,” she said of her marathon debut.

Now that Elmore holds the fastest marathon time run by Canadian woman, she could be selected to Canada’s Olympic team – barring someone else breaking the record between now and when the team is officially announced in May.