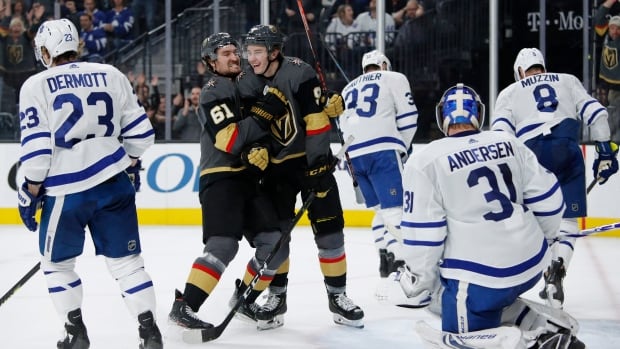 The only thing missing for Marc-Andre Fleury was a magic wand.

Fleury made 31 saves for his 450th win, including an incredible diving stop late in the game, and the Vegas Golden Knights held off the Toronto Maple Leafs 4-2 on Tuesday night.

While his clutch save against the Detroit Red Wings in Game 7 of the 2009 Stanley Cup Final with 1.2 seconds remaining might still be the biggest of his 16-year career, Fleury now has an argument for the most spectacular.

With the Golden Knights clinging to a 3-2 advantage and less than four minutes left, Ilya Mikheyev fired a shot that went off the crossbar and directly to Nic Petan, who was staring at a wide-open net and a chance to score his first goal of the season. But Petan’s backhand from the bottom of the circle was thwarted as Fleury dove back to his left and with his body outstretched snatched the puck before it hit twine, sending 18,292 fans into a frenzy — even some wearing Maple Leafs jerseys.

“It was fun. A little lucky cause I didn’t stop the first one; it was off the crossbar,” said Fleury, who is three wins behind New York Rangers goalie Henrik Lundqvist for sixth place on the career list. “It’s good when you get those second opportunities to redeem yourself. As a goalie those are the saves that maybe make you feel like when you’re a player and score a goal — the saves I love to play for.”

Mark Stone, Cody Glass, Tomas Nosek and Cody Eakin scored for Vegas. But for the second consecutive game it was Fleury who kept the Golden Knights in it with outstanding stops, particularly when the Maple Leafs turned up the pressure in the third period.

With 14:59 left, Fleury denied William Nylander on the doorstep. Then with 11:21 remaining, he stymied Toronto captain John Tavares’ first shot of the game, tipped the puck with the paddle of his stick to himself and snared it with his glove.

It was that kind of night for Fleury.

Moments later, with the heat still on, he robbed Nylander by sliding across the crease and stretching out his left pad at the right moment to prevent the puck from sneaking into the corner of the net.

Fleury, who shut out Calgary 6-0 on Sunday, became the seventh goaltender in NHL history to win 450 games.

“He’s pretty incredible when he makes types of saves like that,” Vegas coach Gerard Gallant said. “As a coach you come to expect that from him. He makes those saves. He’s acrobatic. He never gives up on the puck.”

Jason Spezza had a goal and an assist and Zach Hyman also scored for Toronto. Frederik Andersen, who has lost his last four starts, stopped 33 shots.

The struggling Maple Leafs have lost six in a row and are 0-5-1 since star winger Mitch Marner went down. Toronto dropped to 9-10-4 on the season and has just two regulation victories in its last 16 games.

“We had lots of chances. … Bottom line is we’ve got to stick with it and just keep grinding,” coach Mike Babcock said. “It’s disappointing, but I’m always about the process and how hard guys play. We played way harder, so I thought that was good.”

After Max Pacioretty’s shot trickled through Anderson’s pads into the crease, Glass was there to clean up for a man-advantage goal that gave Vegas a 1-0 lead midway through the second period.

Toronto tied it when Mikheyev entered the zone and dropped the puck off for Spezza, who fired it past Fleury early in the third.

Vegas answered immediately when Nosek made amends for missing an earlier breakaway when he stole the puck in the neutral zone, raced in on a breakaway, put a filthy deke on Andersen and backhanded the puck into the net to make it 2-1 just 42 seconds after Spezza’s goal.

Stone extended the lead to 3-1 with a power-play drive from the right dot at 10:22. Hyman cut Vegas’ lead to one with his first goal of the season at 12:47, but Eakin put the game away when he scored the 100th goal of his career into an empty net with 21 seconds left.