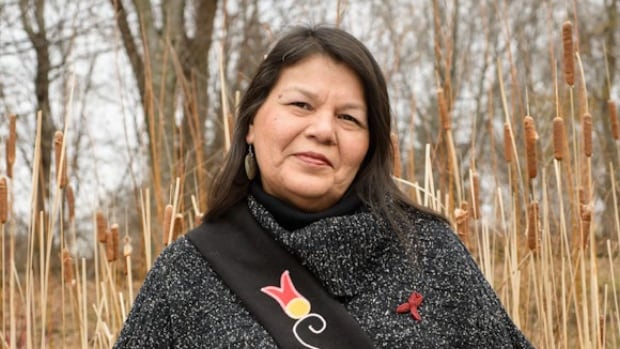 Doris Peltier has dedicated her life’s work to advocating for the wellbeing of Indigenous women living with HIV/AIDS.

The 63-year-old Anishinaabe mother, grandmother and great-grandmother started working in the field in 2010 after she was diagnosed with HIV.

“At the time of my diagnosis and shortly afterwards, I found out that was not something that was unique to me. Many Indigenous women were being diagnosed late like myself,” she said.

Indigenous women, she says, are also continue to be disproportionately affected.

According to a 2017 Public Health Agency of Canada report on HIV, Indigenous people make up 4.9 per cent of the Canadian population and 20.1 per cent of new HIV infections in the country.

“Thirty-one per cent of these were among Indigenous women,” said Peltier. “Those are the kind of stats that I’ve been seeing consistently since I’ve been working.”

Peltier, who is originally from Wiikwemkoong First Nation in Ontario and currently lives in the Greater Montreal Area, is  the co-chair of the Community Aboriginal Advisory Board for Positive Aboriginal Women with the Canadian HIV Women’s Sexual Reproductive Health Cohort Study.

She’s also a member of the advisory council for the Waakebiness-Bryce Institute for Indigenous Health at the Dalla Lana School of Public Health at the University of Toronto, and she works as the national co-ordinator for Visioning Health II, a four-year intervention research study for HIV-positive Indigenous women in Canada funded by the University of Victoria and housed at the Canadian Aboriginal AIDS Network.

The aim of the study is to use Indigenous knowledge as a health promotion intervention to improve the wellbeing of HIV positive Indigenous women living in Canada.

Peltier said it’s important to focus on the well-being of Indigenous women rather than illness.

“For far too long a lot of the focus has been on our trauma and the regurgitation of that trauma,” she said.

“You’re essentially spinning the tires and regurgitating the trauma of the women that you’re working with.”

“It provides a time to focus and strengthen our voices within such a global movement,” said Denise Lambert, chair of the Canadian Aboriginal AIDS Network.

The campaign launches in Ottawa followed by events across the country including in Vancouver, Edmonton, Winnipeg, Montreal and Happy Valley-Goose Bay to unite an Indigenous response to HIV and AIDS mirroring the World AIDS Day theme “Communities Make the Difference.”

Lambert said while some communities are advanced in their understanding, acceptance, and how they disseminate information out to those who need it, there are other communities where a stigma still exists when talking about HIV/AIDS.

“When you see that difference enacted at a community level, it just motivates for times like this when we say it is communities that make a difference,” she said.

For Peltier, the week is an opportunity to share information, prevention, and break down stereotypes and stigma about the experience of living with HIV.

“It’s really important to to reach out to the community. I think this should be happening more often than once a year,” said Peltier.

“There’s a lot of stigma. I think we still have a lot of work to do.”

She feels there’s still a lot of fear and misunderstanding in many Indigenous communities which results in barriers for people living with HIV and in a province like Quebec where culturally-relevant support is limited for Indigenous women, this can lead to lateral violence, isolation and exclusion.