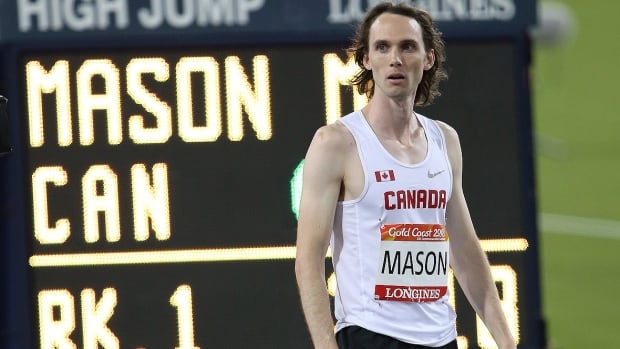 As a veteran coach, Jeff Huntoon can sense a podium finish in the making, and he was certain Canadian high jumper Mike Mason was on track to medal at a pair of major international championships the last two years.

“It gutted me that he didn’t make it out of prelims because that was a really big opportunity for Mike to medal,” Huntoon recalls as the 32-year-old Mason prepares to make his Diamond League season debut in Shanghai on Saturday (CBCSports.ca at 7 a.m. ET).

Mason was in line to win again, according to his coach, at last year’s Commonwealth Games in Australia, having cleared 2.18, 2.21 and 2.24. He then missed all three attempts at 2.27.

“He ends up sixth but [a month] later jumps 2.32 [in Victoria] that would have won at Commonwealth,” says Huntoon. “A lot of it is controlling the emotions on the day.”

‘A work in progress’

Huntoon’s first encounter with Mason was at the 2014 Commonwealth Games in Scotland as jumps coach with Team Canada. He also assisted Mason at the 2015 Pan Am Games when the high jumper was coached full-time by Ziggy Szelagowicz.

“Mike was very good at one-offs … but when you get to the major championships, it’s always a prelim and a final,” says Huntoon, who joined Mason full-time in the fall of 2016. “One of the things I respected about Derek [Drouin] and some of the athletes I’ve coached in the past is they were prepared for both rounds. And you have to be prepared for multiple peaks in a season.

“It’s still a work in progress with Mike and we haven’t got over the hump.”

The Nanoose Bay, B.C. native finished in seventh place with a jump of 2.26-metres in the men’s high jump at the IAAF Diamond League final in Brussels, Belgium. 0:40

Unlike previous years, Mason has maintained his fitness late in a season under Huntoon and strength and conditioning coach Dale Lablans, and is stronger and healthier than at any time in his career following chronic hamstring woes up to and including the 2016 season.

“I knew I needed to get healthy and stronger in a lot of areas if I wanted to compete at a high level and was serious about going to a fourth Olympics,” says Mason, a native of Nanoose Bay, B.C., whose typical training week includes two jump practices, two running workouts and three days of lifting weights.

The mental game is now Mason’s challenge. Staying relaxed, calm and “in the moment” is a daily reminder to remain controlled in his approach on the runway to get in proper position for take-off.

Mike does really good when he doesn’t have an opportunity to sit and get into his head.— High jump coach Jeff Huntoon on athlete Mike Mason and the mental challenges of the sport

“I give him mental scenarios during practice,” says Huntoon. “Two weeks ago, he took 10 jumps and on the last three he envisioned the bar at 2.27, 2.29 and 2.31. What are your emotions? What’s the conversation you’re having in your head?

“The biggest issues we [coaches] run into at this level is athletes want to take themselves to [level] 11 on a scale of one to 10. I tell them their job is to be at seven or eight.”

Huntoon says it was a “calm and collected” Mason who jumped a 2019 world-leading 2.31 on April 5 at the Sam Adams Invitational in Santa Barbara, Calif., breaking Drouin’s Thorrington Field stadium record of 2.28 from 2017.

“Mike does really good when he doesn’t have an opportunity to sit and get into his head,” Huntoon says. “But the reality is, there are going to be more competitors at 2.26, 2.29, 2.31 and you can’t jump right away. What’s your mindset as you’re sitting? When your name gets called, try to replicate the jump you had at 2.24 when you made it by a mile.”

Following Saturday’s high jump competition at 6:19 a.m. ET, Mason travels to Nanjing, China, for a IAAF World Challenge meet on May 21 before returning to the Diamond League circuit June 6 at the Golden Gala in Rome.

While Diamond League points won’t be awarded in the men’s 200 metres at Shanghai Stadium (7:45 a.m.), it will mark the first showdown between Canadians Aaron Brown and Andre De Grasse since the former prevailed in the 100 at the Canadian track and field championships last July 6 in 10.16 seconds.

Ever wonder what it feels like to race the best in the world for 200 metres? Aaron Brown walks you through every step and what both his mind and body are going through at each point. 2:44

De Grasse was third in 10.20 before straining his right hamstring in the 200 heats the next day, cutting short his season for a second consecutive year. But the triple medallist from the 2016 Olympics in Rio is back and looked healthy and explosive running the anchor leg for Canada in the 4×100 at the IAAF World Relays last weekend.

Canada did not qualify for the 4x100m relay final after finishing third in their heat (due to a Japanese disqualification). 1:20

“I’ll be watching his start [on Saturday] and how he runs the corner [in the 200],” CBC Sports track analyst Donovan Bailey says of De Grasse. “How you put your race together, the technical aspects and transition into each phase, is more important than the results at this point in the season.”

In Saturday’s 100 at 8:53 a.m., American Christian Coleman will attempt to continue his dominance after winning last year’s Diamond League final in a world-leading and personal-best 9.79 seconds.

“I love his attitude of ‘come and get me.’ When he comes to the track, he comes not to play,” says Bailey of the five-foot-nine, 160-pound speedster.

Saturday’s field also features Americans Ronnie Baker, Noah Lyles and Mike Rodgers, all of whom ran sub-9.90 in 2018. Su Bingtian will be running at home on the resurfaced track at Shanghai Stadium and will try to avenge a narrow loss to Reece Prescod of Great Britain (10.04 to 10.05) in last year’s Diamond League race in China.

“I think Christian and Su will be together in the middle of the race,” says Bailey. “Christian will probably win, with Noah Lyles and Prescod finishing second and third.”

Lalonde, Newman round out Canadian contingent

Distance runner Gen Lalonde and pole vaulter Alysha Newman are the other Canadians competing in Shanghai.

Newman opens her outdoor season in Shanghai at 6:35 a.m. after her 2018 Diamond League campaign was cut short last May by a six-millimetre tear in her left patellar tendon, which attaches the bottom of the kneecap to the top of the shinbone. She returned to competition indoors in January following months of rest of extensive physiotherapy and cleared 4.73 metres on Feb. 24 at the All Star Perch pole vault meeting in France.

In 2018, Newman cleared 4.75 to set a Commonwealth Games record and improve her Canadian outdoor mark.

The following is a list of upcoming Diamond League meets, all times ET: