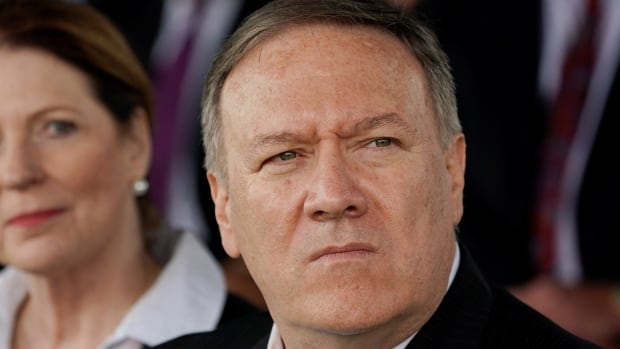 Pompeo said in a letter to the House’s foreign affairs committee, as part of the chamber’s impeachment inquiry into President Donald Trump, that the requested dates for the officials to voluntarily appear are “not feasible.”

“I am concerned with aspects of your request,” Pompeo wrote to Eliot Engel, the New York Democrat who chairs the committee. “I will not tolerate such tactics, and I will use all means at my disposal to prevent and expose any attempts to intimidate the dedicated professionals.”

In issuing a separate subpoena last week as part of the inquiry, the chairmen of three House committees made it clear that stonewalling their investigation would be considered obstruction of Congress in its investigation.

The panels are seeking documents from the State Department and voluntary testimony from the current and former officials.

“Your failure or refusal to comply with the subpoena shall constitute evidence of obstruction of the House’s impeachment inquiry,” wrote Engel and the other chairmen, Adam Schiff of the intelligence committee, and Elijah Cummings of the oversight committee.

The chairmen in their letter were seeking testimony from former State Department officials, including the former ambassador to Ukraine, Marie (Masha) Yovanovitch, and former special envoy Kurt Volker.

I’m concerned with aspects of the Committee’s request that can be understood only as an attempt to intimidate, bully, &amp; treat improperly the distinguished professionals of the Department of State, including several career FSOs. <a href=”https://t.co/QRtMaXlhQM”>pic.twitter.com/QRtMaXlhQM</a>

It’s unclear whether Pompeo will comply with the committee’s request for documents by Friday.

Pompeo, travelling in Italy to meet with the country’s president and prime minister, ignored shouted questions about the impeachment inquiry.

House Democrats launched an impeachment inquiry of Trump after a whistleblower’s disclosure of a July phone call with the Ukraine President Volodymyr Zelensky, during which the U.S. president sought help in investigating Democratic rival Joe Biden and Biden’s son Hunter.

Even before the Ukraine storyline emerged, Democrats since taking control of the House after the midterms have found themselves stymied by the White House on several occasions when making requests for interviews or documents.

The three Democratic chairmen released a statement in response to Pompeo, advising “he should immediately cease intimidating Department witnesses in order to protect himself and the President.”

The statement, alluding to reports that emerged Monday indicating Pompeo listened to the call between Trump and Zelensky, said Pompeo was potentially a “fact witness in the House impeachment inquiry.”

“Any effort to intimidate witnesses or prevent them from talking with Congress — including State Department employees— is illegal and will constitute evidence of obstruction of the impeachment inquiry,” they said.

Also on Tuesday, Republican Chuck Grassley of Iowa, who sits on the Senate’s judiciary committee, released a statement stressing that the whistleblower is protected by federal law.

“This person appears to have followed the whistleblower protection laws and ought to be heard out and protected. We should always work to respect whistleblowers’ requests for confidentiality,” Grassley said. “No one should be making judgments or pronouncements without hearing from the whistleblower first and carefully following up on the facts.”

Some Republicans have criticized the whistleblower for relying in part on information from White House aides. Grassley says such second-hand information “should not be rejected out of hand.”

Trump angered critics, as well as the whistleblower’s lawyer, by suggesting on Monday the White House is “trying to find out” the person’ identity.