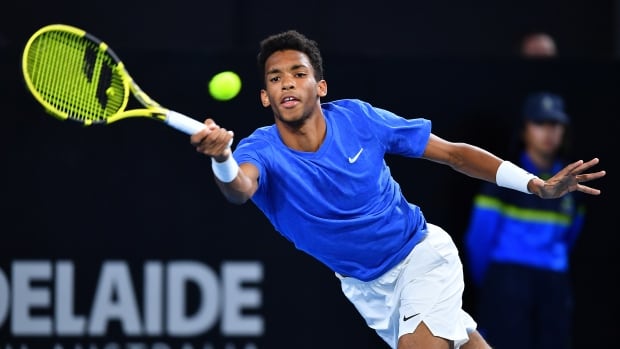 Canada’s Felix Auger-Aliassime is off to the semifinals of the Adelaide International.

The No. 2 seed from Montreal needed just 55 minutes to beat Australian wild card Alex Bolt 6-3, 6-0 in a quarter-final on Thursday at the ATP Tour 250 event.

Auger-Aliassime, 19, had eight aces, no double faults and won 90 per cent of points when he got his first serve in.

Ranked 22nd in the world, Auger-Aliassime did not face one break point aganst the 157th-ranked Bolt. On Thursday, he was seeded

Auger-Aliassime next faces No. 3 seed and world No. 22 Andrey Rublev of Russia in the semifinals of the Australian Open tuneup event.

Rublev won their only previous meeting — on clay in Croatia in 2018.

Dabrowski and Jurak will face top seeds Yifan Xu of China and Nicole Melichar of the United States in the final. Dabrowski and Xu split up as doubles partners after last season.

Meanwhile, French Open final opponents Ash Barty and Marketa Vondrousova delivered the same outcome at the Adelaide International: A dominating victory for the No. 1 player in the world.

The Australian beat Vondrousova 6-3, 6-3 at Memorial Drive to advance to the semifinals.

The last time the players met in the final at Roland Garros, Barty won her first Grand Slam title. Vondrousova has failed to win a set against Barty in four matches.

Barty will next play American Danielle Collins, who beat No. 7-ranked Belinda Bencic 6-3, 6-1.

Barty lost her first match at the Brisbane International last week but has showed steady improvement in Adelaide.

Aryna Sabalenka will meet Dayana Yastremska in the other semifinal on Friday.