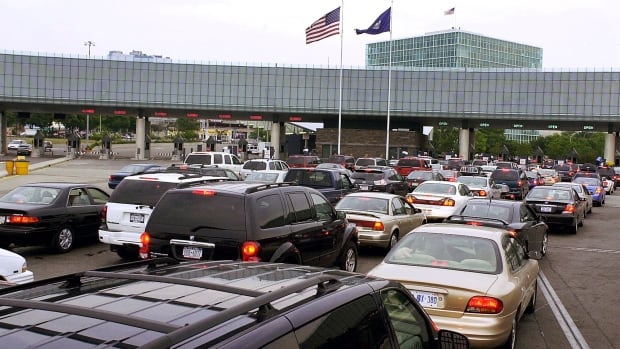 Hundreds of border agents from across the U.S. are being temporarily transferred south ahead of the busy summer tourism season, worrying those along the northern border who rely on cross-border commerce — including U.S. innkeepers, shop owners and restaurateurs who fear their Canadian customers could be caught in backups at border crossings.

U.S. Customs and Border Protection says 731 northern border agents from land, sea and airports are in the process of being sent to the U.S.-Mexico border, where they will help their southern counterparts handle the influx of families and unaccompanied children from Central America.

The move comes as businesses gear up for the summer season, when tens of thousands of Canadian tourists help buoy the economies of communities in border states, as well as deeper inside the United States. Since U.S.-Canada border security was ramped up shortly after the 9/11 attacks, local and state officials have worried that heightened security could hurt trade and the free flow of people back and forth across the 8,891-kilometre border.

Garry Douglas of the North Country Chamber of Commerce in Plattsburgh, N.Y., said commerce with Canada is the “single greatest driving force” in the regional economy, and it took years to get adequate staffing levels at the northern border, where around 400,000 people and $ 1.6 billion US in goods cross daily.

In an email, he said he hadn’t seen any problems yet, but cautioned that peak travel season doesn’t begin until Canada’s Victoria Day holiday weekend May 18-20.

“The decision to deploy northern border CBP [Customs and Border Protection] officers to the southern border makes it increasingly more difficult for the agency to meet their core mission requirements at the border, which include effectively securing U.S. points of entry and safeguarding and streamlining lawful trade and travel,” said the May 3 letter, which was released Wednesday.

The letter was signed by four members of Congress from New York, four from Michigan, two from New Hampshire, and one each from Minnesota, Washington and North Dakota. On Thursday, Vermont’s Democratic U.S. Rep. Peter Welch sent an identical letter to McAleenan.

“Tourism is central to our economy in the Granite State, and I have serious concerns about any disruption in the efficiency of operations at the Canadian border,” New Hampshire Democrat Annie Kuster said in an email interview.

“Moving Customs and Border Protection personnel away from our northern border has the potential to impact U.S.-Canadian commerce and tourism just as we enter the busy summer months. I will work with my colleagues whose states and districts share a border with Canada to address this serious issue.”

Senators Susan Collins and Angus King of Maine said they understand the need for additional resources at the southern border, but in a joint statement, they said they’re monitoring to “ensure that the northern border remains safe and secure, and that crossings that facilitate jobs and vital economic activity are not negatively affected in Maine.” Collins is a Republican and King is an independent who caucuses with Democrats.

While CBP wouldn’t specify where the agents are coming from, they are being drawn from 328 ports of entry.

Vermont CBP port director Gregory Starr, speaking Wednesday after the ribbon-cutting for a new port of entry at Derby Line at the Vermont-Quebec border, said some of his agents were heading south. He said those staying in Vermont would do their best to avoid backups.

“It’s an issue that we have to deal with,” Starr said. “We’re going to help out as much as we can and try to maintain our presence here, as well.”

In Maine, the town of Old Orchard Beach relies heavily on Canadian tourists. Some hotels and motels fly both the U.S. and Canadian flags out front.

Marc Bourassa, one of the owners of the waterfront Kebek 3 motel, said 90 per cent of his customers are Canadian, so he’s concerned about delays at the border. For the past couple of years, Canadian guests have reported to him that things have been running smoothly at the crossings. He doesn’t want to see the apple cart being upset.