“Oh my God. This is terrible,” the president fumed, upon learning of Robert Mueller’s appointment as special counsel to lead the investigation into Russian interference in the 2016 election. “This is the end of my presidency. I’m f—-d.”

So goes the account in Mueller’s 448-page report, released to the public late Thursday morning and immediately devoured by lawyers and political observers who have been waiting 23 months to read it.

But even as the redacted report promised to become one of the most scrutinized government documents in modern American history, laying out an unflattering story of Trump’s questionable conduct, the president’s apocalyptic vision of his time as commander-in-chief has so far not materialized.

And there’s little reason to believe that will change.

The president’s approval ratings have remained relatively steady throughout Mueller’s investigation. The support of his political base hasn’t wavered as news outlets reported on various would-be scandals involving members of Trump’s inner circle and Russians, or Trump and hush payments to women with whom he’d had affairs.

And prior to the public release of Mueller’s report, Trump’s hand-picked attorney general, William Barr, was busy putting what appears now to be a positive spin on a document that is far more damaging to Trump than Barr initially led the public to believe.

‘More damning than the Barr memo’

Particularly damaging, legal scholars say, is the second volume of the report that addresses the question of whether Trump’s activities during the Russia probe amounted to the federal crime of obstruction of justice.

We learned, for example, that prosecutors scrutinized 11 different actions by the president as possible evidence of obstruction.

After poring over Mueller’s work Thursday, former federal prosecutors said they were stunned by the amount of daylight between the special counsel’s report and Barr’s comparably favourable interpretation of the document. 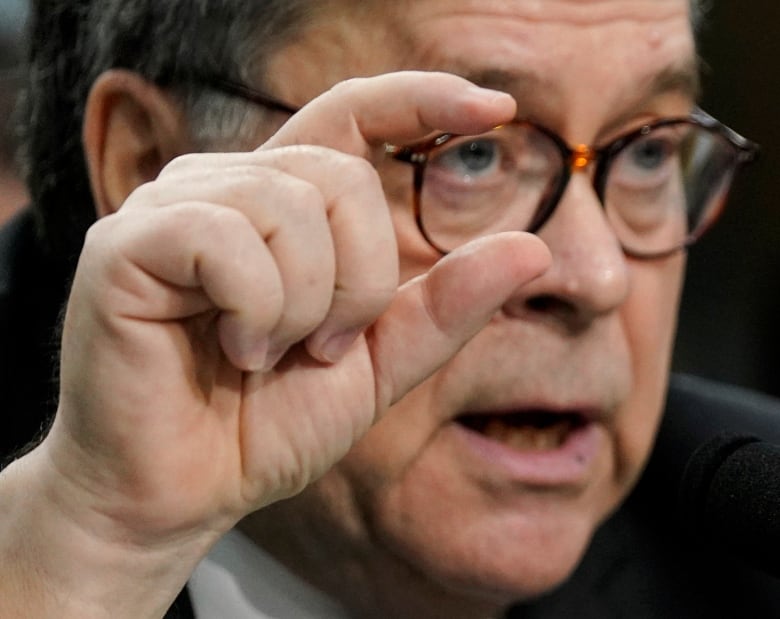 To them, Barr’s four-page summary, released three weeks ago, as well as his news conference before the report’s public release on Thursday — where Barr parroted Trump’s “no collusion” line — amounted to a concerted effort by the nation’s chief law enforcement official to put a pro-Trump spin on Mueller’s work before its release.

“This is radically different — radically,” said Ciara Torres-Spelliscy, a fellow with the Brennan Center for Justice, a think-tank based in New York.

“The Mueller report is much more damning than the Barr memo.” 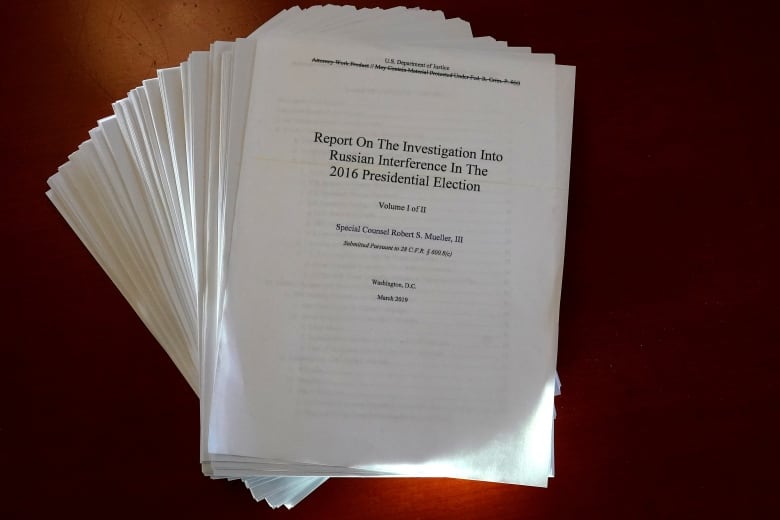 A look at Mueller’s Report on the Investigation into Russian Interference in the 2016 Presidential Election. (Carlo Allegri/Reuters)

She said Barr’s account “purposefully minimizes” details of contacts between members of the Trump campaign and inner circle, and Russian operatives.

Harry Sandick, a former assistant U.S. attorney for the Southern District of New York, said Barr’s summary ignored a key line from Mueller’s text that says investigators “established that the Russian government perceived it would benefit from a Trump presidency and worked to secure that outcome, and that the Campaign expected it would benefit electorally” from Russian hacks.

Mueller’s report also included previously unreported details about Trump’s efforts to stop the Russia investigation by ordering his White House counsel to fire the special counsel, as well as directives to a former campaign manager and a former White House staffer to mislead investigators. In both cases, the directives were ignored.

Yet none of that information was provided in Barr’s summary, released to the public weeks before Mueller’s report. Nor were those details mentioned during Barr’s news conference on Thursday morning.

Barr did tell reporters that he and his deputy attorney general “disagreed” with Mueller’s legal theories regarding obstruction of justice. Mueller wasn’t there to comment on his own investigation or how his boss ended up characterizing the findings.

For instance, Barr argued there is no obstruction of justice without an underlying crime. And by that legal logic, since Trump can’t be prosecuted for criminal conspiracy linked to Russian meddling in 2016 due to insufficient proof of an agreement to conspire, there can be no crime for the president to cover up.

Mueller would apparently beg to differ. In his report, the special counsel wrote: “The injury to the integrity of the justice system is the same regardless of whether a person committed an underlying wrong.” 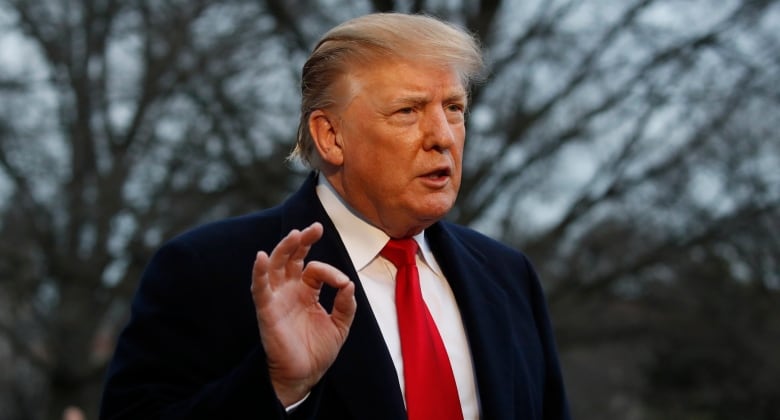 Barr testified last month before Congress that he was unaware of whether the special counsel agreed with his conclusions, and that Mueller declined his offer to review his summary in advance.

Other discrepancies include the fact that Barr said the White House “fully co-operated” with the special counsel. Mueller’s report gave a different portrayal, stating that Trump wouldn’t be interviewed voluntarily, and that his written answers were “inadequate.” The report mentions 36 times in which Trump answered, “I do not recall,” to Mueller’s questions about critical events.

Former federal prosecutor Cynthia Alksne said she was floored by how Barr misrepresented Mueller’s reasons for not making a decision on whether to charge Trump with obstruction.

“There’s a shocking difference between what Barr led us to believe, and why Mueller did not make the traditional prosecution decision,” she said. “I was pulling my hair out when I read that.”

Mueller’s report suggests the team did not pursue prosecution on obstruction due in part to the Office of Legal Counsel’s opinion that a sitting president can’t be indicted.

“[T]his office accepted OLC’s legal conclusion for the purpose of exercising prosecution jurisdiction,” the report says, meaning the question of whether to prosecute was limited by Justice Department policy.

“I got to that section and I said to my husband, ‘You’re not going to believe this,'” Alksne said. “What Barr said isn’t true. It’s not just sorta-kinda not true; it’s completely false.”

During his news conference, Barr had told reporters: “We specifically asked [Mueller] about the OLC opinion and whether or not he was taking the position that he would have found a crime but for the existence of the OLC opinion. And he made it very clear several times that that was not his position.”

Barr said the indecision of Mueller’s team left it for him to step into the void and make a determination in just 48 hours that there were no grounds to pursue a charge.

According to former federal prosecutor Mark Osler, were it not for the fact that Trump is the president of the United States, and shielded by Justice Department policy, a prosecutor would ordinarily go ahead and decide whether to charge or not.

“Mueller was saying here, ‘I knew that I couldn’t go on to charge. I can’t view this as a traditional case evaluation because one of the two options isn’t available.’ So instead, he’s saying, ‘I’m going to just issue my report and note that it’s not an exoneration, and provide that to Congress.'”

That’s hardly the same thing as Trump claiming “total exoneration,” as he did after Barr’s summary was released. (Barr himself mentions in his four-page overview that the report “does not exonerate” Trump on obstruction.)

As Osler sees it, Mueller had no intention of having Barr intervene on a matter that, under the circumstances, should go to Congress to resolve. 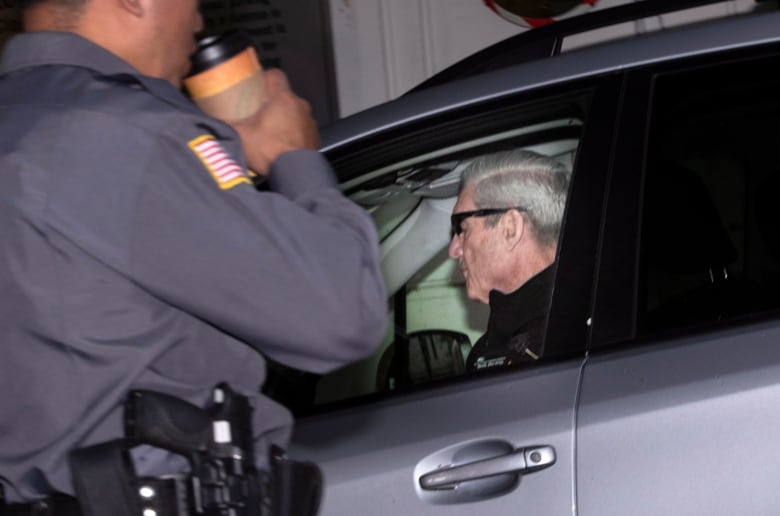 Mueller arrives at his office in Washington on Monday. (J. Scott Applewhite/Associated Press)

Mueller’s move, Osler now believes, “is a soft invitation to impeachment” in the House of Representatives.

Congress has already subpoenaed Mueller to appear. Barr told reporters Thursday he would allow his subordinate to testify. But that could be months away.

Until then, the narrative jousting will continue.

Trump has enjoyed an early advantage, buoyed by Barr’s summary and public statements.

The president’s critics worry about a hardening effect, in which a broader American public views Trump’s claims of being “fully and completely exonerated” as a fait accompli, with Mueller’s report going largely disregarded.

A Monmouth University poll released this week found most Americans (54 per cent) want Congress to move on to new business after the report’s release — a possible sign of Mueller fatigue.