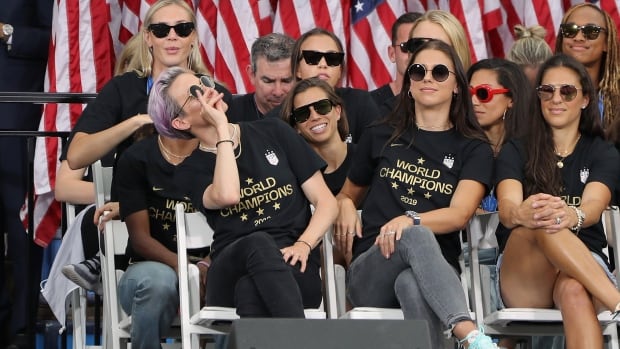 New York state expanded a state law Wednesday that prohibits gender pay discrimination, making it illegal to pay someone less based on characteristics including race, religion, disability or gender identity.

Members of the team have filed a lawsuit demanding pay equity with the men’s soccer team, adding fuel to the broader debate over pay disparities that continue to affect millions of American workers.

The new law, which takes effect in 90 days, also changes a legal standard for pay equity to make it easier for employees to prove discrimination in court.

“Every New Yorker deserves equal pay for equal work regardless of race, sexual orientation, disability, or however they choose to identify,” said Democratic Sen. Alessandra Biaggi, who represents portions of Westchester County and the Bronx and sponsored the bill in the state Senate.

The day Megan Rapinoe became President (no prompter) <a href=”https://t.co/6E7u59VkmI”>pic.twitter.com/6E7u59VkmI</a>

TIME’S UP, an organization that advocates for fairness and against sexual harassment in the workplace, hailed the new law and thanked the soccer players for “their extraordinary courage to play to win on the field, to fight for fairness in court, and to spark a new, global conversation about pay equity.”

Megan Rapinoe scored the game-winner for the United States in the World Cup final to secure their fourth World Cup title in a 2-0 win over the Netherlands. 1:41

During a bill signing ceremony held just before Wednesday’s parade, Cuomo said he supports the players’ push for equal treatment with the men’s team, which failed to qualify for the 2018 men’s World Cup.

Cuomo noted the women’s victory and strong television ratings for their games could support an argument that the women deserve higher pay than the men. “You cannot justify that the men get paid more, period,” he said.

Cordeiro said: “We hear you, we believe in you, and we’re committed to doing right by you.”

Members of the team have filed a lawsuit demanding pay equity with the men’s soccer team.

The ceremony honouring the team followed a ticker tape parade up lower Broadway’s Canyon of Heroes.

Rapinoe noted the diversity of team after it was honoured with a ticker tape parade up New York City’s Canyon of Heroes for winning the World Cup.

She says “we have pink hair and purple hair, we have tattoos and dreadlocks, we got white girls and black girls and everything in between. Straight girls and gay girls.”

Girls in soccer uniforms accompanied the team as ABC broadcaster Robin Roberts introduced each one at a ceremony at New York’s City Hall.

Democratic Mayor Bill de Blasio presented each team member with a symbolic key to the city.

He says the team “brought us together” and “showed us so much to make us hopeful.”