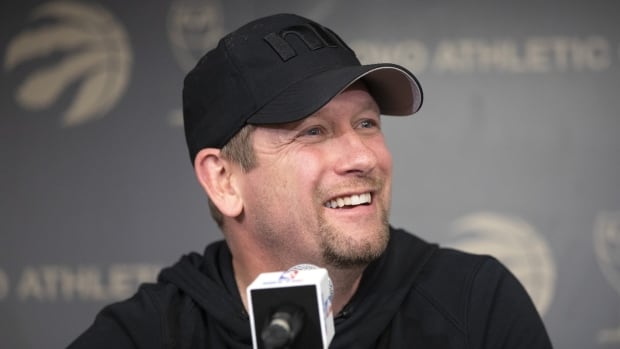 Less than two months after leading the Toronto Raptors to a historic first-ever NBA title, head coach Nick Nurse says he’s ready to get back on the court for his next coaching challenge— trying to qualify Canada for the Olympics for the first time since 2000.

Nurse was appointed head coach of the men’s national team at the end of June.

In an exclusive interview with CBC Sports, Nurse says he’s starting to get a better idea of the roster as Team Canada begins training camp Monday morning in Toronto.

“We’re really at a beginning stage. I’ve just got to get to know everybody from the PR people to the medical people,” Nurse said.

“I’ve got to get the vision in place here quickly because on Wednesday the ball is going up in front of people.”

Canada opens its two-game exhibition series against Nigeria in Toronto on Aug. 7 and then playing in Winnipeg on Aug. 9. It’ll be a first chance for Nurse to evaluate his team.

After those two games the Canadians will travel to Australia for a five-game exhibition series against Australia (Aug. 16-17), New Zealand (Aug. 20-21) and the Americans (Aug. 26) before heading to China for the World Cup

But who will be playing is still yet to be decided.

“Cory Joseph is in and ready to go. R.J. Barrett will be in camp but not participating. Tristan Thompson has pulled out of this session. And Dwight Powell just recently pulled out of the session as well,” Nurse confirmed during the interview.

But the coach who prides himself on getting the most out of every player on the court, no matter their star-power, isn’t overly concerned about who shows up to training camp — he says the team will be competitive and it’ll be up to him to build a winning environment.

“I’ve coached in a lot of trenches and now I’ve got two of the best jobs in the world at the same time,” Nurse said.

“I’m extremely honoured and humbled to have both these jobs and just like I did with the Raptors, I want to give this one everything I got.”