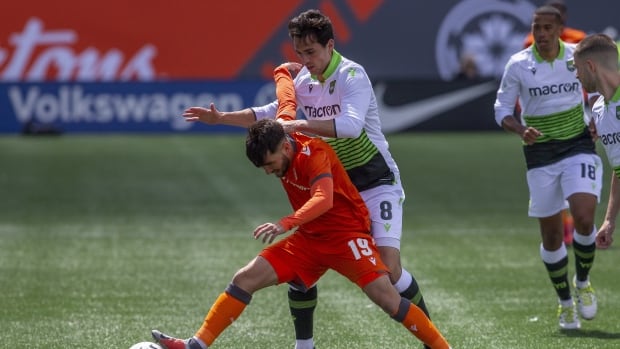 Time is of the essence in the fledgling Canadian Premier League.

All seven teams are up and running and everyone’s got something to show for their effort — some more than others.

Calgary’s Cavalry FC has galloped into an early lead with two straight wins, while the GTA’s York9 FC remains the only club still searching for that elusive first victory.

The CPL’s inaugural season splits into two uneven halves. The spring campaign comprises of just 10 games per team. The longer fall season, which runs from July to October, is more of a marathon with each club facing an 18-game schedule.

There are no playoffs. The winners of each season will meet in a one-game title match to determine the first-ever CPL champion.

These early weeks are demanding. There is little time to rest, reflect, adjust or retool. Players need to know and understand their assignments, while coaches are scouting on the fly, trying to work out what challenges future opponents will present.

The action comes thick and fast. There are three games this weekend — all of which will tell us a little more about the protagonists.

We kick off in Winnipeg, where Valour FC hosts the HFX Wanderers from Halifax. Valour will be desperate to cash in at home after back-to-back losses. The visitors will be playing loose after marking their historic home debut with a victory last weekend.

Edmonton — the “city of champions” — will also be rocking. FC Edmonton is ready to make its home debut. The Eddies will be aiming to take full advantage against Pacific FC, who are clocking up plenty of AirMiles but not many CPL points so far.

The pick of the bunch brings us back to where it all began. Pacesetters Cavalry come to Hamilton to face the Forge.

Hamilton finally earned its first win on Wednesday against PFC. Forge benefitted from some clinical finishing to cruise to a comfortable 3-0 win. Goals at one end and a shutout at the other — check and check.

It was all achieved without their captain, who wasn’t missed for a minute. Kyle Bekker will be missing again on Sunday as he completes a two-game suspension for violent conduct.

The Forge skipper is in the prime of his career. At 28, Bekker has a chance to truly make his mark on the Canadian soccer landscape. But not like this. Deliberately elbowing an opponent is not only dangerous — it is an act of pure stupidity.

There is no room in the CPL, or any other league, for that kind of behaviour. Even though the referees missed the incident, the disciplinary panel did not, and issued the punishment retroactively.

WATCH | Bekker briefly gets away with elbowing during inaugural CPL match:

Bekker must serve the time, and will hopefully learn his lesson. The Canadian Soccer Association has sent out an early warning to all other players — you are being watched and you will be reprimanded if necessary.

No player is bigger than his club or this league. In short: keep it competitive but do not cross the line.

Cavalry, meanwhile, is looking solid and well organized. The Cavs have the look of a team that is hard to beat. A physical battle does not bother them.

Mix that with a little creative flair and you’ve got a template for success. Honduran striker Jose Escalante caused problems all night against Valour and capped the performance with a curling free kick to end the stalemate in the dying minutes.

However, we haven’t yet seen Cavalry on the road. Can they stampede their way into the Hammer and become the first CPL team to notch a hat trick of wins?

Easier said than done. Forge will be in buoyant mood, and their boisterous fans always come together to create a fortress-like atmosphere. The Cavs would likely settle for a point before cantering back to Calgary and a pair of home games against Edmonton and Halifax.

There’s no time like the present to bag those points. They might just be decisive when it comes to crowning a CPL spring champion on Canada Day.