The Viking Sky cruise ship arrived at port on Sunday after a harrowing series of helicopter airlifts that rescued half its passengers from the vessel, which became disabled in rough waters off the western coast of Norway.

Rescue officials said 479 passengers had been rescued from the ship by Sunday, thanks to an airlift that began the previous day after the vessel — carrying 1,373 passengers and crew— sent a mayday call and reported engine trouble.

The airlift was then halted as two tugboats guided the vessel toward the nearest port. Accompanied by the boats, the ship limped into the Norwegian port of Molde, with 436 passengers and 458 crew members remaining on board.

"We understand 20 people suffered injuries as a result of this incident, and they are all receiving care at the relevant medical centres in Norway, with some already having been discharged," Viking Ocean Cruises, the company that owns and operates the ship, said.

Watch: Scenes from inside the Viking Sky cruise ship

Passenger Alexus Sheppard shot this video on board the Viking Sky on Saturday as heaving waves and high winds tossed the disabled cruise ship from side to side. 1:30

"People were alarmed. Many were frightened, but they were calm."

Global Affairs Canada said there were 15 Canadians on board at the time of the incident and are providing consular assistance to one citizen, who has been injured.

Passenger Alexus Sheppard told The Associated Press in a message sent from the Viking Sky that people with injuries or disabilities were hoisted off the cruise ship first.

"It was frightening at first. And when the general alarm sounded it became very real," she wrote. 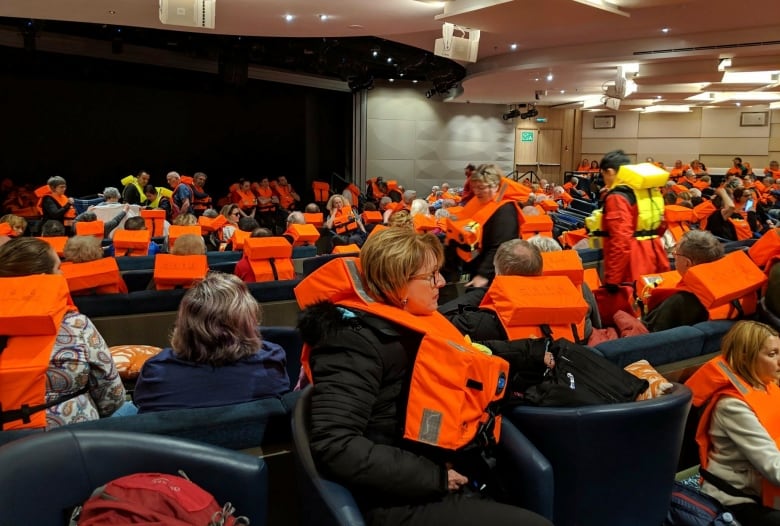 Passengers on board the Viking Sky are seen on Saturday waiting to be airlifted from the ship. (Michal Stewart via AP)

An American passenger, Rodney Horgen of Minnesota, was visiting Norway as a dream pilgrimage to his ancestral homeland when the trip quickly turned into a nightmare.

Horgen, 62, said he knew something was badly amiss when the guests on the tossing cruise liner were all brought to the ship's muster point. He felt sure the end had come when a huge wave crashed through glass doors and swept his wife, Judie Lemieux, about nine metres across the floor.

"When the windows and door flew open and water swept people and tables 20 to 30 feet, that was the breaker. I said to myself, 'This is it,'" Horgen recalled.

"I grabbed my wife, but I couldn't hold on. And she was thrown across the room. And then she got thrown back again by the wave coming back. Hands and faces of fellow passengers were cut and bleeding from shattered glass, he said. An experienced fisherman, Horgen said he had never experienced such rough boating conditions. 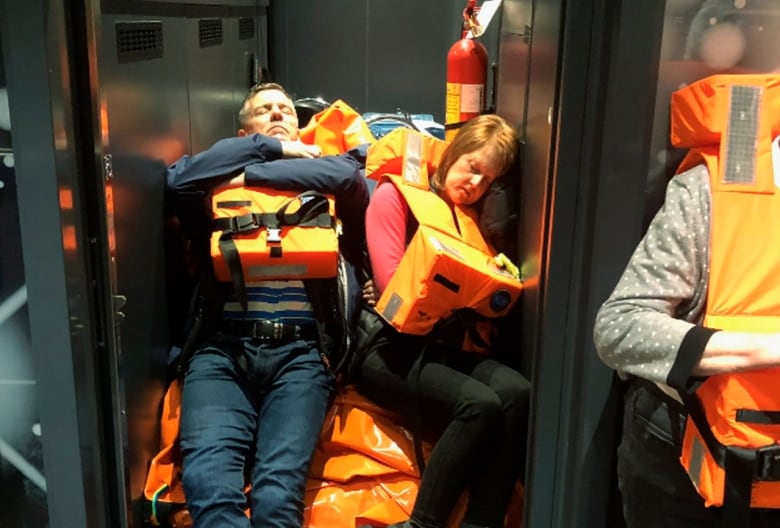 These passengers tried to get some rest in a secure location late Saturday as they waited to be transported off the Viking Sky. (Alexus Sheppard via AP)

Rescue workers had to hoist passengers one-by-one to safety as heaving waves tossed the ship from side to side and high winds battered the operation.

The Viking Sky issued the mayday call as bad weather hit and it started drifting toward the rocky shore.

Coast guard official Emil Heggelund told the newspaper VG it's believed the ship was only 100 metres from striking rocks under the water and 900 metres from shore when it stopped and managed to moor. 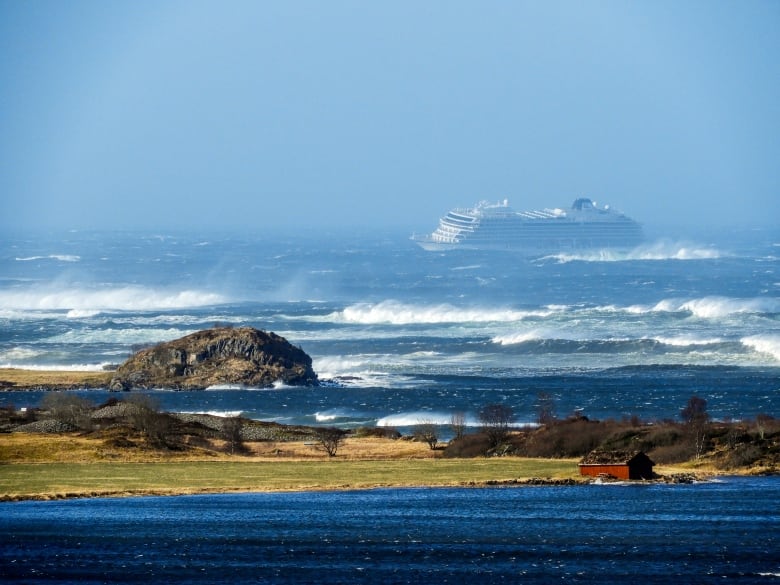 The cruise ship Viking Sky can be seen drifting toward land in strong winds, off Hustadvika Bay, Norway. The vessel sent out a distress signal because of propulsion problems. (Frank Einar Vatne/EPA-EFE)

Rescue teams with helicopters were sent to evacuate the ship under extremely difficult circumstances, including gusts up to 38 knots (70 km/h) and waves over eight metres.

As the weather eased, a decision was made to halt the rescues and head to Molde, where the vessel arrived around 11:30 a.m. ET Sunday.

The majority of the cruise ship passengers were reportedly British and American tourists.

The Viking Sky was on a 12-day trip that began March 14 in the western Norwegian city of Bergen, according to the cruisemapper.com website.

The ship was visiting the Norwegian towns and cities of Narvik, Alta, Tromso, Bodo and Stavanger before its scheduled arrival Tuesday in the British port of Tilbury on the River Thames.

The Viking Sky, a vessel with gross tonnage of 47,800, was delivered in 2017 to operator Viking Ocean Cruises. 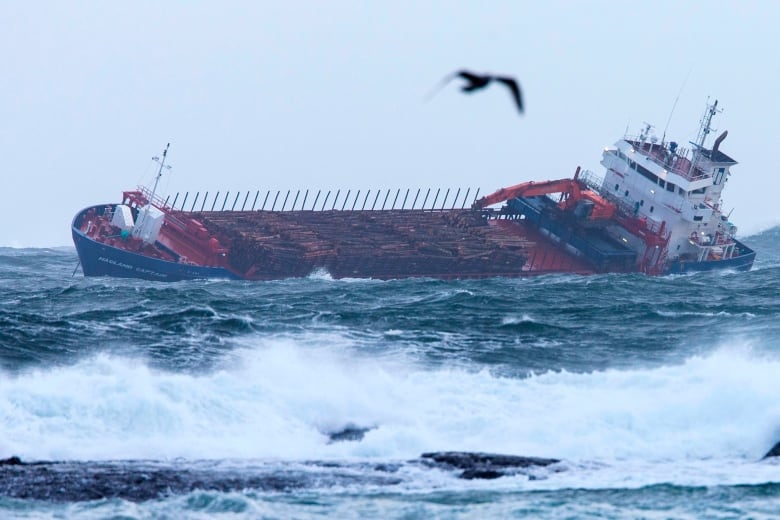 The Hagland Captain, seen here on Sunday, had to drop anchor in the same area as the cruise ship Viking Sky when it sent a distress call on Saturday off the west coast of Norway. The freighter experienced an engine seizure in rough water. (Svein Ove Ekornesvaag/AFP/Getty Images)

Meanwhile, a freighter has experienced an engine seizure in the same stormy Hustadsvika Bay region off western Norway where the cruise ship became disabled.

Authorities say they have had to divert two of the five helicopters rescuing the Viking Sky passengers and crew to help the Hagland Captain cargo vessel's crew of nine.