STAVANGER, Norway – To say the 2019 mixed doubles world curling championship has been a breeze to this point for the Canadian team is a massive understatement.

Jocelyn Peterman and Brett Gallant have disposed of their opponents in dominating fashion – four straight wins over Romania, Ukraine, Belarus and Denmark to begin the event.

They’ve made it look nearly effortless. The duo has outscored the four teams by a combined margin of 50-9.

The Canadian duo stayed perfect at 3-0 after a 9-0 win over Belarus on Monday in Stavanger, Norway at the world mixed doubles curling championship. 1:33

But now the real competition begins for the Canadians.

The Swedes are also undefeated, setting up a clash of granite titans which will more than likely determine who places first in Pool A.

“They’re both great curlers. We’ll get a good game tonight. We both expect to be in the playoffs. But this game is important for placing,” Gallant said.

“I don’t think we’re going to change anything or there’s more pressure. We know we have to tighten the screws a little bit to beat them.”

The 48 teams competing in Norway are divided into six pools of eight and will play a round robin. The top two teams from each pool, along with four of the third-place teams with the best Draw-Shot Challenge (pre-game draw to the button), qualify for the playoffs.

It would seem as though Canada and Sweden are a locks for those top two spots in Pool A but make no mistake, the Canadians want to send a message by getting a win Tuesday night.

As for whether or not Peterman and Gallant are concerned about not being challenged to this point of the tournament, they both admit they’ve been playing each game as though they’re taking on the best.

And now they are actually doing just that.

“We’ve been trying to treat this like every game is just as important. We know, obviously, that the competition gets a little tougher from here on out but we’ve been playing strong since the beginning,” Peterman said. 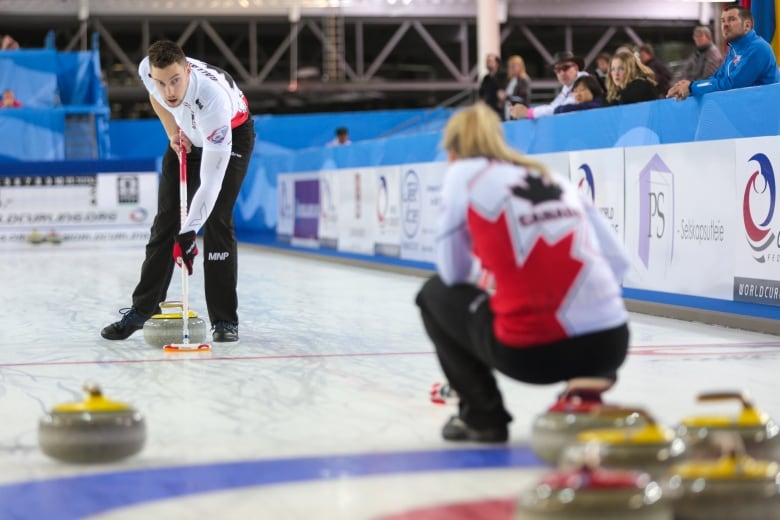 Gallant and Peterman have been outstanding to this point in the tournament. (Tom Rowland/World Curling Federation)

The Canadians have yet to be in a pressure-packed moment at the world championship. In fact, they haven’t trailed in a game to this point.

How then, do they go from cruise control to competition mode in a hurry? Peterman said they’re going to keep doing exactly what they’ve done to this point.

“You prepare the same way before the game. We’ve been making precise shots throughout,” Peterman said.

“There might be more intensity tonight but I think it’s the same game.” 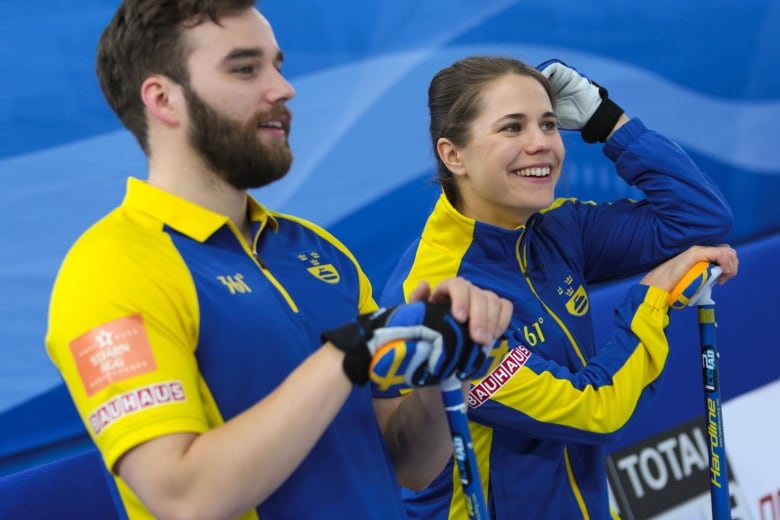 Hasselborg and Eriksson are making their first appearance together at a world mixed doubles championship — but the two have actually won the Swedish title four previous times.

However, scheduling issues the past three times involving their foursomes have stopped them from appearing at the international event.

Despite both of their four-person teams playing the final Slam event of the season in Saskatoon this week, the two decided it was too important to be at this year’s world championship.

“I love playing with Oskar. We have known each other for a long time,” Hasselborg said.

And yet for all the massive games Hasselborg has played in, she admits to having a little bit of nerves playing at the mixed doubles world curling championship for the first time because it’s not a discipline she regularly participates in.

“It’s completely different from what I normally do. It’s almost making me a little nervous because it’s out of my comfort zone.”

As for how confident the two are feeling at this point of the event, Hasselborg said they’re continuing to improve as the tournament progresses and have momentum going into the game against Canada.

“We’re great communicators and we know the ice,” she said. “But in mixed doubles you have one bad rock the game is over. We just have to make our shots.”

For Eriksson, he relishes the games against Canada and is ready for another battle between the two curling nations.

“Canada has always been one of the best countries in the world in curling so we’ve always said if we want to be the best we have to beat the best and Canada has a lot of good curlers. Beating Canada is always fun.”