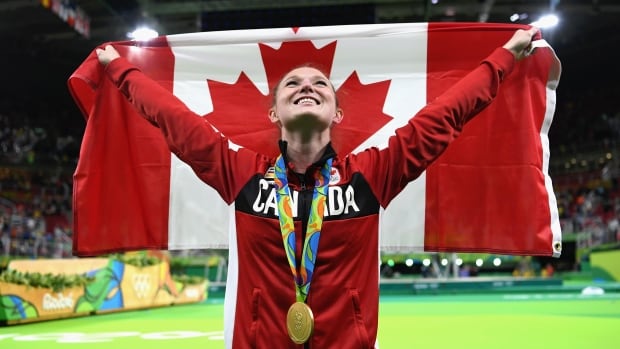 The 30-year-old from King City, Ont., took time to come to grips with her injury before going public with it.

Winner of Olympic gold in both 2012 and 2016, MacLennan posted a photo of herself in a cast on social media Monday.

She told The Canadian Press she landed awkwardly on the side of the trampoline competing at a World Cup in Minsk, Belarus on April 21.

Ranked fourth after the first of her two routines, MacLennan says she made a mistake to start her second routine as she bounced to gain height.

“Honestly, I picked a bad bounce to go on,” MacLennan said Monday. “Rather than being patient and waiting for another one I decided to go, and right from the start was kind of scrambling, travelling all over the trampoline and substituting skills.

“The next thing I knew I was on the side frame instead of the trampoline. The balls of my feet were on the frame and my heels were on the springs and my feet flexed back pretty aggressively.”

When she tried to walk, MacLennan couldn’t put weight on her left ankle. She underwent X-Rays in Belarus and again upon her return to Canada.

She’d sustained a small fracture in her fibula, but a more serious one in her talus bone.

The silver lining for MacLennan is the 2020 Summer Olympics in Tokyo are over 14 months away, which gives her time to recover and return to form.

But 2019 is an important year for MacLennan in terms of qualifying a quota spot for Canada in women’s trampoline in Tokyo. So she wants to compete at the next World Cups in Russia and Spain in September and October respectively, as well as the world championship Nov. 28 to Dec. 1 in Tokyo.

“It’s definitely a hiccup in the path or a bump in the path, but I’ve faced worse in that path,” MacLennan said.

In the months leading up to the 2016 Games in Rio, MacLennan dealt with concussion-like symptoms stemming from neck injuries.

She dialled back the difficulty on her Olympic routines and still defended the gold she’d won in London.

MacLennan wanted to know the extent of her ankle injury and the prognosis before speaking about it publicly.

“It’s OK to feel emotional, but you want to make sure you’re not panicking when you don’t know what’s going to happen,” she explained.

“Definitely more comfortable now knowing all the information and having a plan in place.”

MacLennan also didn’t want talk of her injury to take attention away from the Elite Canada trampoline event in Calgary this past weekend. MacLennan would have competed there if not injured.

“In the past, my injuries have been predominantly concussion-related or neck-related and it’s not that, so I was actually really grateful it was my ankle and not my head,” she said.

MacLennan will be in an air cast for six to eight weeks, but she’s planned hard workouts to accelerate her return to the trampoline.

“The main objective is to stay strong, stay fit and stay mentally in it,” MacLennan said.

She’ll do core and shoulder workouts as well as swimming and one-legged drills on an assault bike. MacLennan says she can maintain her flips and spatial awareness suspended from bungee cords.

“I’m working with my sports psychologist preparing for some of the stresses I will undoubtedly face in the next few months,” MacLennan added.

“I know it’s not going to be a smooth path back, even when I get the cast off.

“When I get back to the trampoline, I’ll probably face challenges with strength, range of motion and mobility in the ankle, which is a pretty critical joint for what I do.

“I think the more you can do ahead of time to prepare yourself for that, it makes it easier to have thoughts you can rely on to help navigate that.”