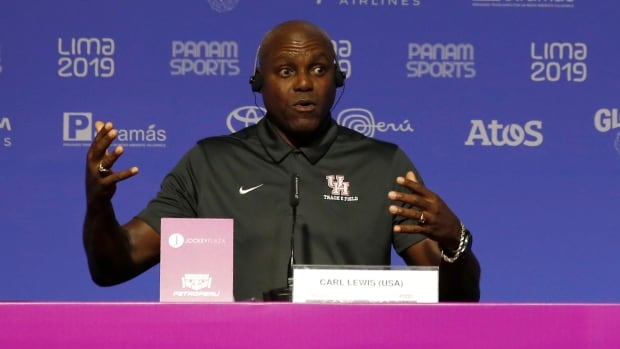 Lewis spoke in the Peruvian capital of Lima, where he will present the 100-metre and long jump medals at the Pan American Games. He also said that he became an athlete thanks to his mother, who competed in the first Pan Am Games in Buenos Aires in 1951.

“If I didn’t have a strong woman in my life, I wouldn’t be sitting here today,” he said at a press conference with Leroy Burrell, a former world record-holder in the 100 metres. “My mother was a pioneer.”

The U.S. national team has long championed equal rights. Players collectively filed a lawsuit earlier this year that alleges discrimination by the U.S. Soccer Federation and are seeking pay equitable with that of the men’s national team.

“There are a lot of issues going on,” he said. “We have a racist president, who is prejudiced, and misogynistic, who doesn’t value anyone outside of himself. … But that doesn’t mean we can’t fight for what is right for people, and look at others where they may have missed an opportunity or may have been marginalized in their lifetime.”

The U.S. has been reeling from mass shootings over the weekend in El Paso, Texas, and Dayton, Ohio, that killed 31 people.

Trump on Monday called the mass shootings “evil attacks” that are crimes “against all humanity” and said unity must replace hatred in society. But he has also used divisive language about immigrants and political opponents.