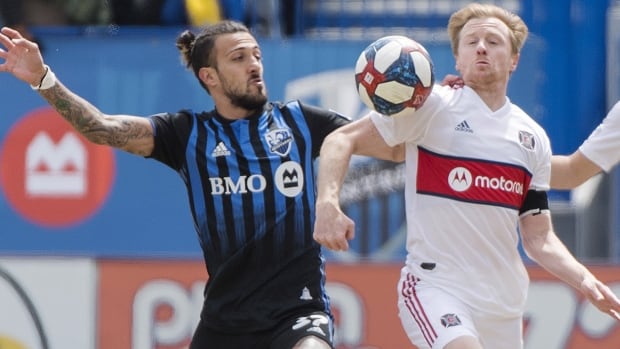 Panamanian striker Omar Browne had a dream debut for the Montreal Impact as he came off the bench and scored the winner in his first Major League Soccer appearance.

Montreal is tied for first in the Eastern Conference with 17 points after 10 games.

“With a full stadium like that, I was a little bit nervous but the crowd helped me get motivated,” said Browne in Spanish, through a translator. “Once I was on the field, I felt comfortable. It’s been obviously hard to adapt to everything here but I’m ready to keep working and get better.”

Browne, who signed with Montreal on loan three weeks ago, came into the game as a substitute in the 40th minute for the injured Clement Bayiha (thigh). His speed down the wing and fancy footwork gave Montreal a spark on offence in the second half.

In the 59th minute, Browne created a scoring chance as he cut across the field and flipped the ball to Saphir Taider in the box, but Taider was just offside.

“Every time he got the ball, something special was happening,” said midfielder Samuel Piette. “He was beating players, cutting inside, shooting. He’s a guy, when the ball’s at his feet, he wants to make something happen. It’s very good to have him.”

With seven minutes left in a scoreless game, Browne evaded a tackled on the edge of the box along the endline, kept the ball in bounds, fended off a Fire defender and poked the ball towards goal from a tight angle.

The 24-year-old’s shot went off Chicago veteran Bastian Schweinsteiger and he fired his own rebound past goalkeeper David Ousted.

Browne, the nephew of former Impact player Roberto Brown, saluted the 15,758 in attendance at Saputo Stadium after his goal.

“He’s a very fast player,” said Impact coach Remi Garde. “His acceleration is phenomenal. For a first game, that was good. I was hesitant to play him because we don’t speak the same language and it can get complicated. But what a good start.

“I think he’s going to help us a lot going forward.”

Evan Bush made two saves for his league-leading fifth clean sheet of the season (tied with D.C. United’s Bill Hamid). The Impact have recorded four straight clean sheets at home dating back to last season.

It was just the second home game of the season for the Impact as they continue their surprising start to the 2019 campaign. Montreal is unbeaten at Saputo Stadium in its past eight MLS matches and is 11-1-2 at home in the last 14.

The Impact have won two games in a row for the first time this season following a 3-0 victory against the New England Revolution on Wednesday.

“This victory does us a lot of good,” said defender Zakaria Diallo. “Third game of the week and we cap it off with a home win. [The clean sheets] give us motivation going forward. It means the defence is clicking right now. We need to keep it up.”