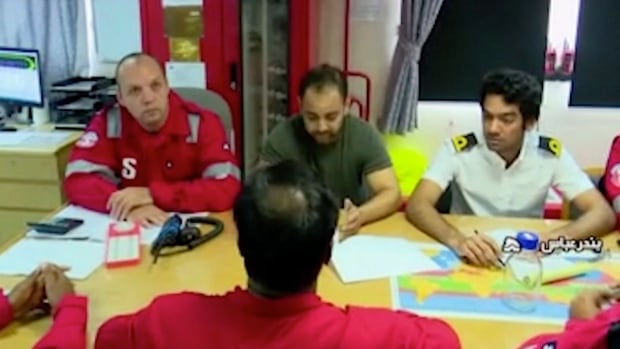 All 23 crew on a British-flagged tanker seized last week by Iran in the Strait of Hormuz are safe and well, the vessel’s Swedish operator Stena Bulk said on Wednesday after speaking to them.

Iran said on Saturday it had seized the Stena Impero because it had collided with a fishing boat. Stena Bulk has said it has received no evidence of such a collision.

“We had direct contact with the crew on board the vessel last night by telephone and they’re all okay and in good health and they’re getting good cooperation with the Iranians on board,” the firm’s spokesperson Pat Adamson said.

Stena Bulk’s CEO Erik Hanell said he hoped Tuesday’s contact was “a first sign that we will soon see more positive progress from the Iranian authorities.”

Britain described the seizure as piracy and called on Monday for a European-led naval mission to ensure safe shipping through the Strait, a strategic waterway for oil transportation.

A recording has surfaced of radio messages between an Iranian military commander and a U.K. warship just minutes before the capture of a British tanker in the Persian Gulf. 1:26

Britain has also sent a mediator to Iran to discuss freeing the tanker, the head of Iran’s Supreme Leader’s office said on Wednesday according to the semi-official Tasnim news site.

Mohammad Mohammadi-Golpayegani provided no details about the British mediator’s trip but made an ironic reference to Britain’s involvement during colonial times in Iranian affairs.

“A country that at one time appointed ministers and lawyers in Iran has reached a point where they send a mediator and plead for their ship to be freed,” Mohammadi-Golpayegani said, according to Tasnim.

Adamson said the next step for the operator would be to try and get somebody on board to check up on the crew, but that he had no timeline for when the crew might be repatriated.

“We haven’t had any direct response from the Iranian authorities about visiting the vessel as yet but we hope we will have that soon,” he said.

“All the appropriate governments and embassies are supporting and helping us.”

The news comes as a large British-flagged vessel transited the Strait of Hormuz in the first such passage made by a British ship since Iran seized the Stena Impero.

Maritime publication Lloyd’s List identified the vessel as BW Elm and reported that British warship HMS Montrose closely shadowed the vessel but did not provide a direct escort. The Royal Navy could not immediately be reached for comment.

Data on tracking site Marine Traffic showed the commercial ship arrived at a port in Qatar early Wednesday after transiting the strait.

In a statement to The Associated Press, the ship’s owner BW LPG declined to comment on specifics, but said the company “is grateful for the U.K. and international community for their naval presence” providing security to ships in the area.