The federal government has rejected a public effort to ban something that many Canadians may have assumed was already illegal.

"We're disappointed that we don't have legislation at this point," says Alberta activist Devon Hargreaves. "But we will continue to advocate for those who don't have a voice."

Hargreaves, who works with the LGBTQ community, is talking about the controversial practice known as conversion therapy. It's a widely discredited approach of trying to counsel someone who is gay into being straight, either through talk therapy, medication or a combination of the two.

He started a petition in late 2018 asking the federal government to ban conversion therapy, particularly with regard to minors. Garnering more than 18,000 signatures, it urged the Liberals to outlaw the act of coercing or counselling minors to change their sexual orientation or gender identity, and to prohibit taking minors outside the country for that purpose.

"[Conversion therapy] should not be happening in Canada in 2018 or 2019," says Hargreaves, 24. "But we know it is still happening, and it's happening to minors."

The World Health Organization issued a statement in 2012 saying this type of therapy poses a "severe threat to the health and human rights of the affected persons."

The Canadian Psychological Association echoed that stand in 2015, saying: "Conversion or reparative therapy can result in negative outcomes, such as distress, anxiety, depression, negative self-image, a feeling of personal failure, difficulty sustaining relationships, and sexual dysfunction." The CPA adds that it, "opposes any therapy with the goal of repairing or converting an individual's sexual orientation, regardless of age."

While Canada doesn't have a national ban on the practice, some provinces have restrictions:

Hargreaves says the patchwork of provincial prohibitions is problematic, and he believes a federal ban is essential.

"If there isn't a federal ban, we have a hard time tracking where this is still happening, and it shouldn't be happening anywhere," he says.

The petition was presented in the House of Commons on Feb. 1 by NDP MP for Saskatoon West, Sheri Benson.

On March 19, the government responded to it by saying that, "conversion therapies are immoral, painful, and do not reflect the values of our government or those of Canadians."

But it added that the governance of conversion therapy is largely a provincial and territorial issue, since it is sometimes carried out by members of the health profession, and said the practice can be addressed through existing portions of the Criminal Code.

"Certain Criminal Code offences may apply to situations involving conversion therapy, depending upon the circumstances," reads the federal government's statement.

"For example, Criminal Code offences such as kidnapping, forcible confinement and assault may apply where a person is forcibly compelled to undergo conversion therapy … we continue to work with provincial and territorial governments to address these practices."

'I'm scarred from it'

Hargreaves says he's disappointed by the federal government's response, and he doesn't plan to stop campaigning for a formal ban on conversion therapy in Canada.

He's running as an MLA in Alberta's upcoming election to continue to bring attention to the issue.

"We will continue to push for that legislation," he says. 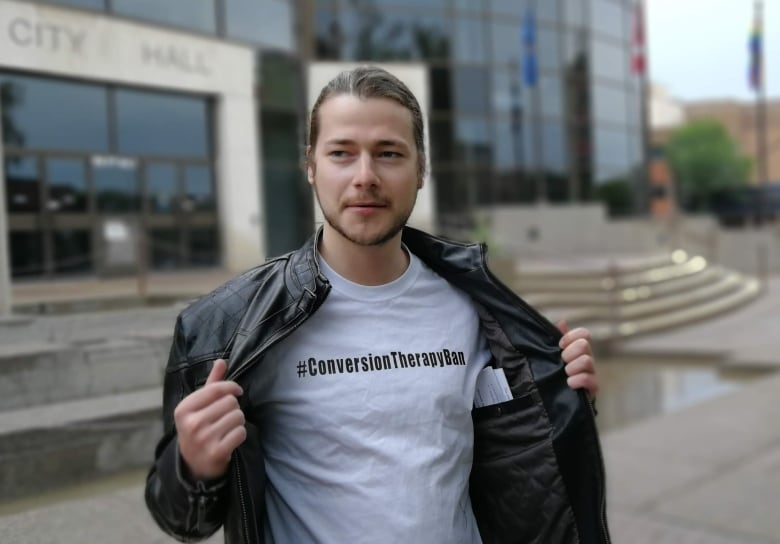 Devon Hargreaves of Lethbridge, Alta., is running for provincial office in the upcoming election to call attention to the practice of conversion therapy. (Cody Kapscos)

Although Hargreaves hasn't experienced conversion therapy himself, he says he knows others who have, and he's witnessed the effects on their lives through his work at YQueerL Society for Change in Lethbridge.

Conversion therapy these days happens mostly informally in churches on a one-on-one basis rather than in larger, more organized groups, Hargreaves says, but he stresses that the impact on people is the same.

Matt Ashcroft, 29, of Belleville, Ont., is someone who knows about that impact first-hand, and he's gone public about his experience.

"I'm scarred from it," Ashcroft says. "I will never be able to forget what happened to me on that weekend, it's still so hard to process."

Ashcroft is referring to the first time he attended a conversion therapy retreat six years ago. He went voluntarily after he came out to his father and was shunned for being gay. Although his mother was supportive of him, Ashcroft says he felt pressure to try to be "normal."

"I was still sorting myself out and I wanted to try to do it to get the love of my father back," he admits. 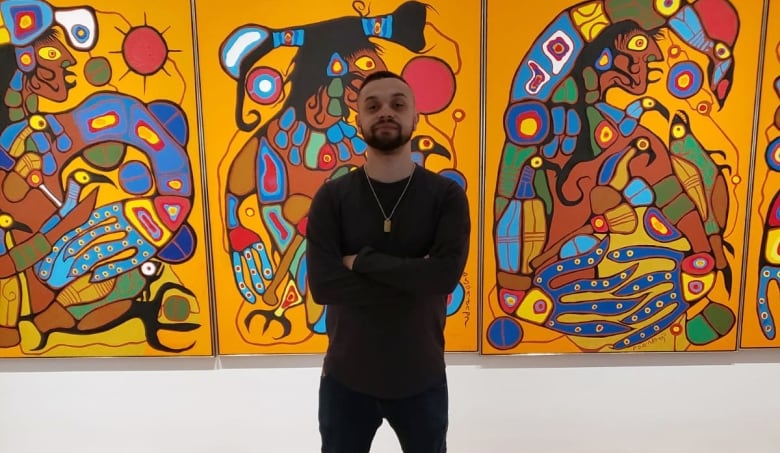 Matt Ashcroft, 29, of Belleville, Ont., has gone public about the effects of his experience with a conversion therapy program. (Matt Ashcroft)

Ashcroft attended the weekend retreat when he was 23 with a friend. This particular program was in the U.S., and he paid $ 600 for it. He also had to sign a waiver saying he wouldn't talk about it, something he has now chosen to ignore.

He describes the weekend as traumatizing. Activities included walking down a long path while being berated by organizers for his lifestyle, having to simulate being violent towards his father by hitting a bag with a baseball bat to get his "feelings out," and watching others re-enact their own painful experiences with sexual abuse.

"The goal was to diminish our homosexuality as much as possible," explains Ashcroft. "Sometimes the goal was to change us, and sometimes it was just to convince us not to act upon our desires."

The weekend culminated in a ceremony Ashcroft describes as a kind of graduation, where participants spread seeds around to symbolize their masculinity.

Only after he left the retreat and spoke about his experience there with others did he realize how damaging it had been emotionally. He says it has taken years to work through it — Ashcroft now lives as a gay man and says he still has nightmares about the therapy.

Brower is originally from Calgary, where conversion therapy is not prohibited by the provincial government, and was raised in an Evangelical church. He says he realized he was gay at age 9 and was bullied throughout elementary and high school because of it.

"I was picked on by older kids, called names, kicked in the playground," says Brower.

He says the bullying only intensified in high school and culminated in Grade 12, when he was outed by classmates before he was ready to do it himself. Although his parents were supportive of him, Brower says he struggled for years to reconcile his desires as a young gay man with his faith and identity as a Christian. 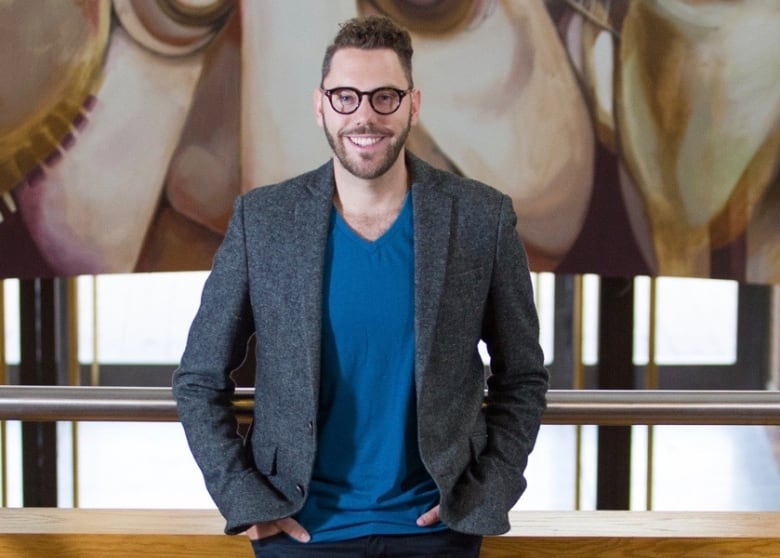 His first encounter with conversion therapy was when he was 16. Brower says that he sought help for his depression by seeing a Christian counsellor, who introduced the idea of changing his sexuality. He says the counsellor told him he wasn't born gay, and that he could therefore be "rehabilitated."

Brower enrolled in a conversion therapy program through a Christian organization in Calgary.

"It was emotional abuse, rather than physical," says Brower. "The message was that I wasn't created this way, that perhaps I was abused as a child, that God doesn't accept this."

Brower paid $ 400 for that year-long program and he says it nearly drove him to suicide.

"It really did a number on me," he says. "It contributed to my feelings of shame about my sexuality, the idea that God couldn't accept me if I was gay … I felt oppressed and like I was fighting through a fog against myself."

He tried the program three more times in his desperation to feel accepted by his church, until he turned 26 and realized he couldn't continue. That year he finally came out publicly through a post on YouTube.

Subsequently, Brower did find acceptance in the more liberal United Church and was able to reconcile his faith with his sexual orientation. He eventually became so comfortable in his sexuality that he proposed to his partner on stage at a Jann Arden concert.

"I'm engaged now and planning to marry in 2021, and I finally feel at peace."

After coming out, Brower founded a Queer theatre company in Calgary that ran for six years, and produced a play about conversion therapy called Oblivion that he has toured throughout the country in small venues.

"I wrote the play to confront the havoc this type of therapy caused me," explains Brower. "It was such an important part of processing what happened to me and to bring light to it."

Like Hargreaves, Brower says he is disappointed in the government's failure to enact a federal ban on conversion therapy.

"It's a sad day. The federal government has let us down."

Hargreaves and others who supported the petition say they plan to regroup and continue to push Ottawa for a nationwide ban.