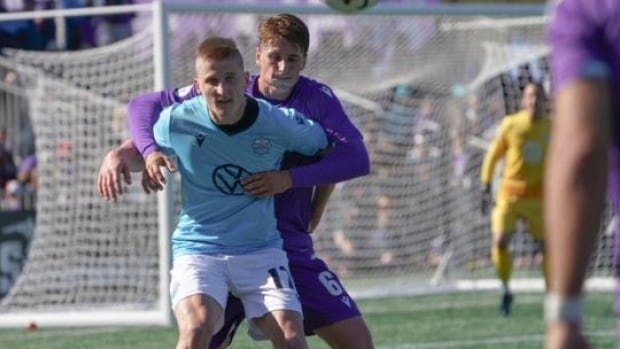 Professional soccer in Canada entered a new era this weekend with the opening games of the Canadian Premier League, a historic moment that wasn’t lost on the fans, coaches and players.

Pacific FC defeated HFX Wanderers FC of Halifax 1-0 in a fast-moving contest Sunday at a sold-out Westhills Stadium at Langford, B.C. York 9 FC and Hamilton’s Forge FC played to a 1-1 draw Saturday before about 17,500 fans at Tim Horton’s Field in Hamilton.

“This is great for Victoria and great for Canada,” said Victoria fan Dave Buttree. “We need our own domestic league. I’ll come to as many games as I can.”

The drumming and singing never stopped Sunday afternoon as the Westhills Stadium crowd of more than 5,000 roared its approval at every kick and attempt on goal. Westhills Stadium is currently undergoing an expansion to accommodate more spectators.

League commissioner David Clanachan said he was pleased with the talent on the field and the support of the fans after attending Saturday’s opener in Hamilton and Sunday’s game at Langford.

“Everybody’s been waiting for this,” said Clanachan, at Westhills. “They are rooting for us, the home team.”

He said the opening weekend set the tone for the style of play for the league, which is a focus on open, fast play with few delays.

“We’ve got a good flow in the game,” said Clanachan. “We’ve talked to the players and we want a good standard of play. We don’t want this diving and rolling around.”

“We talked about consistency,” he said. “They put in a big effort and at times played good football. It’s good to get the first win out of the way.”

Silberbauer said the team is far from its peak but “we’ve come a long way. We want to play positive football.”

Wanderers FC coach Stephen Hart said his players came out flat in the first half but improved as the game progressed.

“You could accept it if you played well and you lost but I thought in the first half nobody wanted to accept the responsibility to play football,” he said.

Hart said he would not use the long distance his team travelled from its East Coast home to meet Pacific FC as an excuse for the loss.

Pacific FC opened the scoring at the 23rd minute of the first half on a header by centre back Hendrik Starostzik off a corner kick.