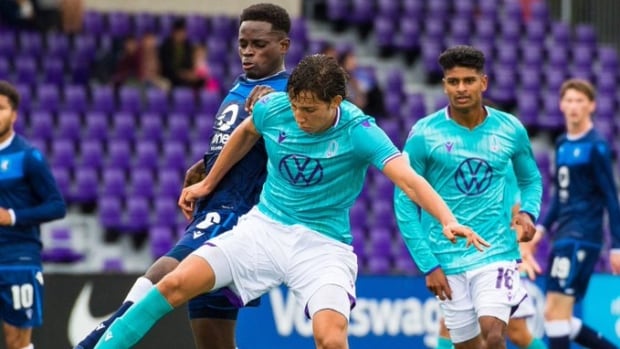 The Tridents were the livelier side from the start, overwhelming the visiting Eddies.

After failing to capitalize on some early chances, the hosts struck the game’s only goal in the 28th minute.

Following a failed clearance from FCE keeper Conner James, the ball bounced to Chung at the top of the box. The right-back settled the ball, creating space with an excellent touch, before taking a left-footed shot that bounced off a defender and into the net.

WATCH | Pacific FC vs. FC Edmonton match in a minute:

From there, the match settled into a back-and-forth affair, with chances at both ends. Late into the game, with the Eddies still in search of an equalizer, coach Jeff Paulus called on his bench, bringing on Ramon Soria, Philippe Lincourt-Joseph, and Easton Ongaro to try and spark his attack. But it was forward Tomi Ameobi who had the best chances—three golden opportunities that just missed the mark by a hair.

Although the visitors dominated the final half-hour, Pacific’s new-look backline (with some serious help from Mark Village in goal) held on to preserve the clean sheet.

The Van Isle-based club now move ahead of FCE by one point, as their total increases to 15.