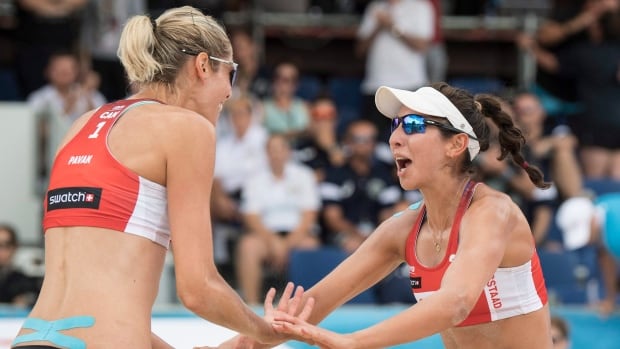 Canada’s Melissa Humana-Paredes and Sarah Pavan are off to the quarter-finals at the world beach volleyball championships.

Toronto’s Humana-Peredes and Pavan, from Kitchener, Ont., are hoping to improve on their fourth-place showing from the most recent world championships in 2017.

“It feels great coming off of that win,” Humana-Paredes said. “We are just taking every game one at a time. It’s the quarter-finals now, so that’s our next focus. After that performance, if we can maintain that level throughout the next few games, we’re going to have a good shot.”

The Canadians will face 18th-ranked Marta Menegatti and Viktoria Orsi Toth of Italy in the quarter-finals.

Sarah Pavan and Melissa Humana-Paredes vs Sanne Keizer and Madelein Meppelink from the world beach volleyball championships in Hamburg, Germany. 1:07:24

The quarter-finals and semifinals are Friday with the final on Saturday.

Meanwhile, two Canadian men’s teams were eliminated in the round of 32. Grant O’Gorman and Ben Sexton fell to Austria, while Sam Pedlow and Sam Schachter were defeated by Brazil.

Coverage concludes Sunday with the men’s bronze-medal match at 6:30 a.m. ET, followed by the gold at 8 a.m. ET.