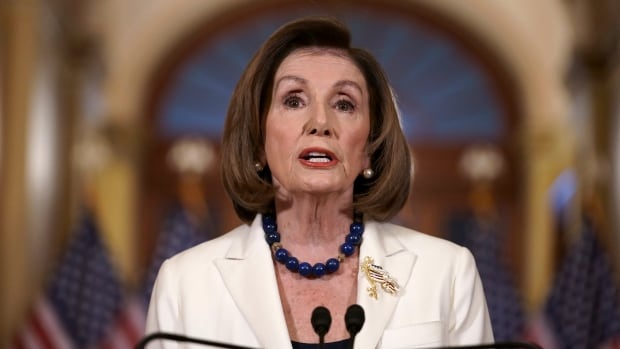 House Speaker Nancy Pelosi, citing Donald Trump’s “failure to faithfully execute the law,” said Thursday she will ask the chair of the judiciary committee to proceed to draw up articles of impeachment against the U.S. president.

The Democrat said the facts were uncontested with respect to Trump’s dealings with Ukraine this spring and summer. Military aid and a crucial White House meeting were withheld, she charged, in exchange for Ukraine announcing an investigation into Trump Democratic rival Joe Biden.

“If we allow a president to be above the law, we do so surely at the peril of our republic,” she said.

Pelosi did not offer more details on the process.

Democrats could begin drafting articles of impeachment in a matter of days, with a judiciary committee vote next week. The full House could vote by Christmas. The matter would then move to the Senate for a trial in 2020, presided over by the chief justice of the Supreme Court.

Earlier Thursday, Trump tweeted that if impeachment is inevitable, he hoped it would proceed quickly “so that our country can get back to business.”

Three leading legal scholars testified Wednesday to the judiciary committee that Trump’s attempts to have Ukraine investigate Democratic rivals are grounds for impeachment.

“Our democracy is what is at stake,” Pelosi said. “The president leaves us no choice but to act because he is trying to corrupt, once again, the election for his own benefit. The president has engaged in abuse of power, undermining our national security and jeopardizing the integrity of our elections.”

A fourth expert called by Republicans warned against rushing the process, arguing this would be the shortest of impeachment proceedings, with the “thinnest” record of evidence in modern times, setting a worrisome standard.

Trump is alleged to have abused the power of his office by putting personal political gain over national security interests, engaging in bribery by withholding $ 400 million US in military aid Congress had approved for Ukraine, and then obstructing Congress by stonewalling the investigation.

Democrats in the House say the inquiry is a duty. Republican representatives say it’s a sham driven by their rivals’ animus toward Trump. And quietly, senators of both parties conferred on Wednesday, preparing for an eventual Trump trial.

“Never before, in the history of the republic, have we been forced to consider the conduct of a president who appears to have solicited personal, political favours from a foreign government,” said New York Democrat Jerry Nadler, chair of the judiciary panel.

‘We cannot wait for the election’

“We cannot wait for the election,” he said. ” If we do not act to hold him in check, now, President Trump will almost certainly try again to solicit interference in the election for his personal political gain.”

The Democrats have arrived at this point based on two months of investigation sparked by a government whistleblower’s complaint, culminating in a 300-page intelligence committee impeachment report, which found Trump “sought to undermine the integrity of the U.S. presidential election process and endangered U.S. national security.”

When Congress began investigating, it said, Trump obstructed the investigation like no other president in history.

The Democrats have been stymied in their desire to question several witnesses or obtain documents from the White House, with the likes of Trump personal lawyer Rudy Giuliani and chief of staff Mick Mulvaney defying subpoenas from the House committees.

Republicans defended the president in a 123-page rebuttal this week, claiming Trump never intended to pressure Ukraine when he asked for investigations of Biden and his son, who sat on the board of a Ukraine energy company. The aid was eventually dispersed, they argue.

No U.S. president has been convicted in a Senate trial after impeachment.

Both Andrew Johnson (1868) and Bill Clinton (1998) were acquitted in the Senate after being impeached by the House.

Richard Nixon resigned in 1974 as the impeachment process was occurring.