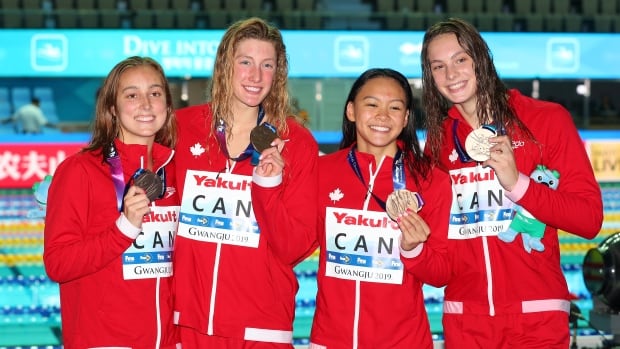 Penny Oleksiak pushed Canada onto the podium in the women’s 4x200m freestyle relay on Thursday at the aquatics world championships in Gwangju, Korea.

Oleksiak, anchoring the squad, powered past the Chinese swimmer in the lane next to her over the final 200 to help Canada earn bronze in the event. Kayla Sanchez led the relay, with Taylor Ruck and Emily Overholt making up the middle 400.

Canada clocked in at seven minutes, 44.35 seconds, well behind the world-record pace set by both Australia and the U.S.

Oleksiak and Ruck, now 19, were also part of the Canadian team that won bronze at the 2016 Rio Olympics. At worlds, Oleksiak’s first 50 at 25.69 seconds set a blistering pace that propelled Canada to the podium.

The Canadian team of Penny Oleksiak, Taylor Ruck, Emily Overholt, and Kayla Sanchez set a national record of 7:44.35 to take bronze in the 4×200-metre race 9:32

Australia wound up setting the new world mark at 7:41.50, while the Americans settled for silver and a new national record at 7:41.87. Katie Ledecky returned to the pool for the U.S. after dropping the 200 and 1,500 free due to an illness.

Ariarne Titmus, Madison Wilson, Brianna Throssell and Emma McKeon took down the old mark of 7:42.08 set by China at the 2009 worlds in Rome during the height of the rubber suit era.

After swimming her four-lap leg, Ledecky sat down in a chair behind the blocks. She got up to cheer on Katie McLaughlin during the anchor leg.

Ledecky hadn’t competed since preliminaries on Monday. The following day she withdrew from the 200 free heats and the 1,500 free final because of symptoms that included dehydration and vomiting.

Earlier Thursday, Oleksiak chose not to swim the 100-metre freestyle heats where Ruck clocked 53.04 seconds to qualify for the final.

The Toronto native shared gold in the event at the 2016 Olympics along with American Simone Manuel, who narrowly made the cut.

Penny Oleksiak, Kayla Sanchez, Emily Overholt, and Taylor Ruck look back on their national record and bronze medal in the 4×200-metre relay. 1:31

Swimming Canada released a statement explaining Oleksiak had achieved her goals at worlds, and wanted to save energy for the relay race.

“The three goals for Penny coming into the meet were to help Canada win medals in the relays, to get back to being in world individual finals, and get back to performing best times. In the first four days of this meet, she’s achieved all three of those goals, including helping us win our first medal in the 4×100 freestyle relay since 1978.

“With four more events in the last four days of the meet, particularly with the 4×200 freestyle relay being today, Penny and the performance staff have decided together that she will not swim the 100 freestyle at this competition.”

Oleksiak placed sixth in the 200 freestyle after setting a personal best of one minute, 56.41 seconds in qualifying. She remains entered in the 50 butterfly.

Canada’s Markus Thormeyer wasn’t even supposed to be in the 200 backstroke semifinal. But when China’s Xu Jiayu dropped out, Thormeyer, who finished 17th in heats, earned a last-minute spot.

Thormeyer said he got the call while in the athletes’ village and was told to hurry to the pool. Perhaps the lack of preparation time helped.

The 21-year-old from Tsawwassen, B.C., swam the second-fastest time in his semifinal, easily earning a spot in Saturday’s final at 1:56.96.

Pickrem, the 22-year-old Halifax native, posted the third-fastest qualifying time at 2:23.11. Earlier at worlds, Pickrem won bronze in the 200 individual medley after being disqualified in the event two years ago.

Caeleb Dressel led all the way in winning the 100 freestyle, earning the American his third gold and fourth medal overall.

Dressel touched in 46.96 seconds, the only man to dip under 47 seconds in the final.

“It hurt really bad to be honest,” he said. “You don’t always get that magical feeling every night but you’ve just got to shut the brain off and go.”

Dressel tied for being quickest off the starting block and held off a challenge from Chalmers in the closing meters to defend the world title he won in 2017.

Dressel’s other golds came in the 50 butterfly, a non-Olympic event, and the 4×100 free relay. He took silver in the mixed 4×100 medley relay.

In the women’s 200 butterfly, Boglarka Kapas of Hungary won in 2:06.78. U.S. teammates Hali Flickinger and Katie Drabot took silver and bronze, respectively, after coming in as the top two fastest qualifiers.

American swimmer Lilly King lost an appeal of her disqualification from the 200 breaststroke preliminaries.

FINA’s jury of appeal upheld the DQ shortly before the evening finals began.

It was a big blow for King, the outspoken doping critic who was aiming for a sweep of the breaststroke titles in Gwangju. She already won the 100 over Russian rival Yulia Efimova.

King won the third morning heat in 2 minutes, 24.56 seconds, but was disqualified for not touching the wall with both hands at the same time in the first turn of the four-lap race, according to USA Swimming.

The U.S. team filed a formal protest, which was denied by FINA’s appeals process. The matter was then escalated to the jury of appeal at the Americans’ request and the decision came down about seven hours later.

King’s time would have qualified her second-fastest for the evening semifinals behind Canada’s Sydney Pickrem, who led the way in 2:24.53.

King reacted with shock upon seeing “DSQ” next to her name on the video board. She said she wasn’t told why she had been disqualified although she asked the officials