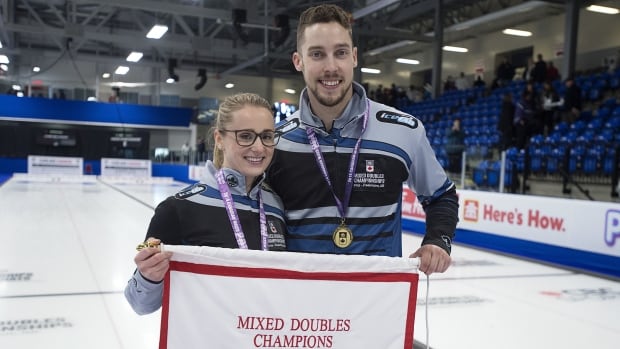 Peterman and Gallant also won the title three years ago in Saskatoon, when they defeated Geoff and Laura Walker.

But this will be the first time the two are putting on the Maple Leaf together to compete on the world mixed doubles stage – in 2016 they weren't able to travel to the world championship due to scheduling conflicts.

The game was tied 3-3 in the sixth end in a back and forth affair when Peterman made a double with her last rock to score five and take control of the game, 8-3.

"I knew there was a lot on the line with that shot. I took my time. We knew what to expect with the ice and made it," Peterman said.

Martin and Griffith wouldn't go away though, answering with three in the seventh.

That made it 8-6 heading to the final end – Peterman was forced to draw to the four foot to secure the 9-6 victory.

"This is incredible. Jocelyn made a huge shot for us," Gallant said.

Both Peterman and Gallant were emotional after the victory. One year ago the two had high hopes of becoming Canada's first mixed doubles team at the Olympics. They lost in the semifinal – a crushing defeat for them both and something they were thinking about after Sunday's win in Fredericton.

"That was probably one the hardest losses I've ever had," Peterman said.

Gallant, fighting back tears, looked at Jocelyn as he expressed his joy over winning this one.

"I love our team"

"I love our team," he said. ""We really enjoy getting to play together and making the shots for each other. It's something really special."

Now they'll take their curling talents and romance – the two are an item –  across the ocean next month, wearing the Maple Leaf at the world mixed doubles championship in Norway at the end of April. Canada has never won a mixed doubles world championship.

Peterman, 25, is coming off her first full season as the second for Jennifer Jones. She won a Scotties title in 2016 as a member of Chelsea Carey's team.

"I've never been on the podium at worlds so I'd love to make that happen," Peterman said.

Gallant, 29, hadn't been able to play with Peterman at the past two mixed doubles nationals due to being a member of Brad Gushue's rink which had won the past two Briers and then went onto compete at men's worlds. The scheduling conflict didn't allow the two to play together.

But now they've played together twice at the mixed doubles nationals and have two national championship wins.

"To get this opportunity to represent Canada, we want to make the most of it," Gallant said.

Peterman and Gallant owe at least some of their mixed doubles success to their relationship as a couple. The two really didn't know one another before Gallant reached out to Peterman a few years ago.

Gallant needed a partner for that year's Canadian mixed doubles championship in Saskatoon.

"He just asked me to play over Facebook," Peterman says with a laugh. They've been dating ever since.

Gallant says (with a smirk) his only intention was to find a solid curling partner.

"It was strictly about curling ability," he says. In that first event together the two captured the championship.

"We've been together ever since and we like mixed doubles a lot," Peterman says.

When it comes to communicating on the ice, both Gallant and Peterman say it's an advantage to be dating because they can be blunt with one another and not fear hurting the other's feelings.

"Sometimes I request his feedback to be a little bit nicer," Peterman says.

"I think Jocelyn knows I'm just trying to get the information across as best I can," Gallant counters. "I think she knows I might say things she might not hear normally, but knows it comes from a good place."