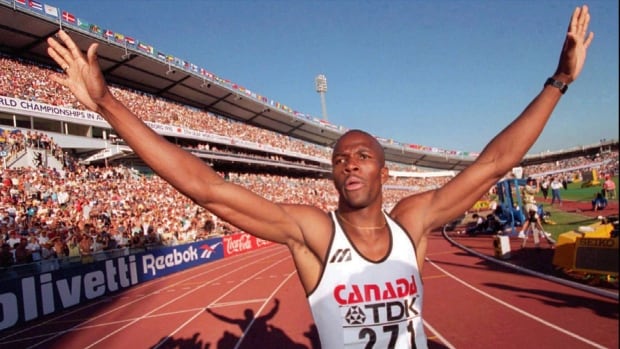 It is hard to think of a more famous 9.84 seconds in Canadian sports history.

It took a lifetime of confident concentration to bring sprinter Donovan Bailey to the line for the race that made him king of the world.

Anastasia Bucsis, host of Player’s Own Voice Podcast, explores self-assurance with Bailey. Without that confidence, track history could very well have been different.

Bucsis and Bailey zero in on one race to talk it through, because the thing we may forget, looking back at his triumphant 100 metres in the 1996 Olympics, was just how agonizing the race was for competitors. It took an eternity to get underway. False start followed false start. The disqualified Linford Christie even refused to clear the blocks for a while. But through it all, Bailey kept his composure and his certainty of victory.

He gives full credit for that confidence to his parents. Which is not to say they were stroking his ego. On the contrary, when Bailey was breaking world records, his folks often didn’t even choose to attend, and both loving parents maintained a cool attitude about their son’s growing fame and accomplishments.

Check out all the POV podcasts

Much like the CBC Sports’ Player’s Own Voice essay series, POV podcast lets athletes speak to Canadians about issues from a personal perspective. To listen to Donovan Bailey and earlier guests this season, subscribe for free on iTunes, Google Podcasts, Stitcher, Tune In or wherever you get your other podcasts.