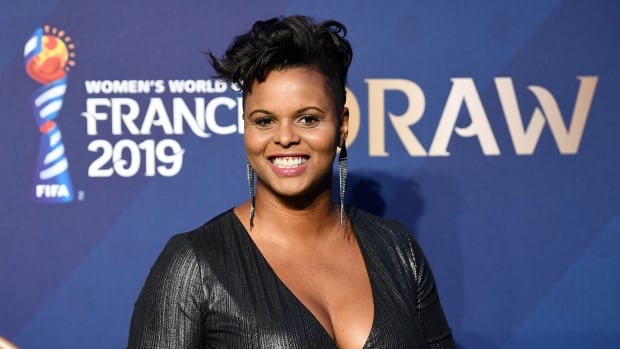 As goalkeeper for the national soccer team, Karina LeBlanc was part of the generation that put the Canadian game on the map. Between Olympic medals and high World cup expectations, the sky is now the limit.

But for LeBlanc and her cohorts, it was never just about what happened on the pitch.

Even in the big wins, the team aimed beyond the game of the day. The truly big play was to make women’s soccer a force for global change. Helping young women get the chance to participate in the world’s game, more often than not, also helped the national team players reassess themselves in positive ways.

Since becoming Head of CONCACAF Women’s Football, LeBlanc has had the privilege and pleasure to see it happen again and again in the 41 countries that represent the FIFA  association: a shy girl comes to the pitch for the first time,  and within a few hours sees herself as a player, with all the confidence, enthusiasm and strength that goes with that.

Player’s Own Voice podcast host Anastasia Bucsis leads Karina LeBlanc through a refreshingly optimistic conversation about a career in sports that still feels like the best is yet to come — even now.

Earlier this year, Karina wrote a powerful letter to her newborn daughter for CBC Sports’ Player’s Own Voice essay series, which, like the POV podcast, lets athletes speak to Canadians about issues from a personal perspective.

The ‘read’ and ‘listen’ versions of POV are now joined by a new way for athletes to share opinions and expertise about issues in Canadian sports: Player’s Own Voice in Studio brings digital video to the POV approach

To listen to all three seasons of Player’s Own Voice, subscribe for free on iTunes, Google Podcasts, Stitcher, Tune In or wherever you get your other podcasts.