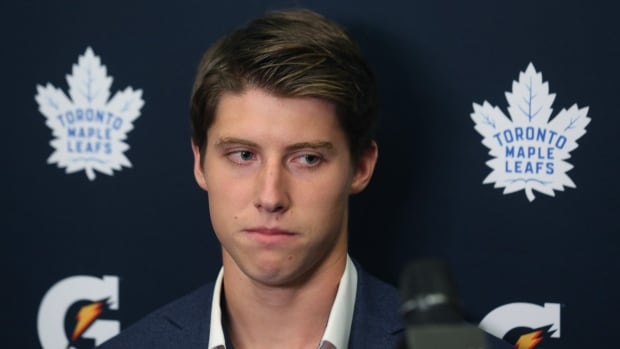 This column is an opinion by Oren Weisfeld, a Toronto freelance journalist who focuses on the intersection of sports and politics. For more information about CBC’s Opinion section, please see the FAQ.

The locker room is a sacred place in hockey — one where every word or action is supposed to be kept in-house. Historically, players have obliged with the unwritten rules that ask them to keep their mouths shut about what goes on behind closed doors.

It’s part of hockey’s toxic culture. One that asserts power over players from a very young age, asking them to keep their head down, work hard, play by the rules, and never under any circumstances break the trust of the coach or organization by making private actions public, no matter how inappropriate those actions are.

Then we learned on Sunday that during Toronto Maple Leafs’ forward Mitch Marner’s rookie season, head coach Mike Babcock asked him to rank his teammates from the hardest-working to the laziest and then exposed the list to the team, leaving Marner in tears and his teammates furious.

What was shocking wasn’t just the action itself, but the fact that it got out of the locker room.

Even more surprising, perhaps, were Marner’s words to the media at practice on Tuesday: “I think if you wanna share [your] stories [involving coaches], do it… it’s your story to tell.”

For a 22-year-old from Markham, Ont., Marner is more confident and calculated than his boyish face lets on. Players aren’t supposed to speak out against coaches, but Marner is a young superstar unwilling to play by the old rules.

Still, even Marner couldn’t have expected to be the catalyst of an unlikely movement that has seen current and former NHL players start speaking out against hockey’s toxic culture and those who enable it, potentially changing the unfair balance of power that has existed for decades.

Not very surprising the things we’re hearing about Babcock. Apple doesn’t fall far from the Tree, same sort of deal with his protege in YYC. Dropped the N bomb several times towards me in the dressing room in my rookie year because he didn’t like my choice of music. First one to

“He then walked out like nothing ever happened. You could hear a pin drop in the room, everything went dead silent. I just sat down in my stall, didn’t say a word.”

In the aftermath of Aliu’s comments, former Carolina Hurricane Michal Jordan accused Peters of kicking him and also punching another player in the head during a game.

Peters issued an apology on Wednesday in an open letter to the Flames organization, saying: “I know that my comments have been the source of both anger and disappointment, and I understand why. Although it was an isolated and immediately regrettable incident, I take responsibility for what I said.”

He is away from the team while the Flames investigate.

Treliving meeting with media post-game, RE: Peters’ letter. There is no change, as the investigation continues: <a href=”https://t.co/15oMEVN4gt”>pic.twitter.com/15oMEVN4gt</a>