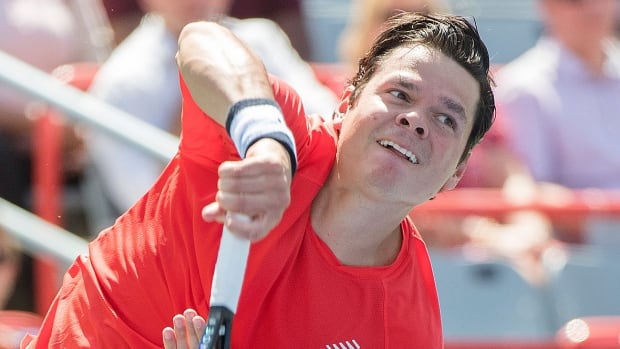 Milos Raonic is off to the second round of the Rogers Cup.

Raonic, who has struggled with various injuries this season, dispatched his opponent in one hour, 12 minutes.

Ranked 20th on the ATP Tour, Raonic broke Pouille in the third game of the first set and held serve from there — thanks in large part to 10 aces.

The 28-year-old from Thornhill, Ont., then broke Pouille again in the fifth game of the second set before closing things out in tidy fashion on home soil, finishing with 16 aces.

Raonic lost the 2013 Rogers Cup final against Rafael Nadal at the same venue.

He also fell to the 29th-ranked Pouille in the quarter-finals of the Australian Open back in January, but improved to 4-1 all-time against the Frenchman with Monday’s win.

Raonic was originally supposed to open against Taylor Fritz of the United States, but was bumped to the other side of the bracket when South Africa’s Kevin Anderson, the ninth seed, pulled out of the $ 5.7-million US ATP Tour Masters 1000 series event.

The 20-year-old Shapovalov, who sits 31st in the world, captivated tennis fans in Montreal two years ago when he upset Nadal in a memorable third-round match.

A four-time Rogers Cup champion following his victory in Toronto last year, Nadal is the tour’s No. 2-ranked player and the clear favourite with Novak Djokovic and Roger Federer skipping this year’s event.

Auger-Aliassime and Pospisil took on the French duo of Jeremy Chardy and Fabrice Martin in doubles Monday afternoon.

The 207th-ranked Pospisil reached the semifinals in Montreal in 2013, defeating No. 6 Tomas Berdyh before falling to Raonic.

This year, however, Pospisil is a wild-card entry attempting a comeback after spending eight months recovering from a serious back problem.

Fernandez lost her first round match 6-0, 6-1 to Russian Marie Bouzkova on Monday in Toronto. 1:09

Schnur is ranked 98th in the world, while Polansky sits 172nd.

The women’s side Rogers Cup bracket is being played in Toronto. The tournament alternates between the cities every year.

The 16-year-old from Laval, Que., won just 37 per cent of her first-service points, losing the match in just over an hour in front of a half-filled day session crowd of supporters in Toronto.

Down 5-1 in the second set, Fernandez held off two match points but couldn’t hold off the third. She left the court to a loud applause and showed her appreciation by clapping at the crowd.

Fernandez had trouble from the start, and Bouzkova broke her twice within 10 minutes en route to a 3-0 lead.

The Canadian, who won’t turn 17 for another month, received a loud applause when she fired an ace past Bouzkova to win her only game of the match in the second set.

Bouzkova, ranked No. 91, converted six of eight break points and was never broken as she advanced to the second round, where she’ll face a much tougher opponent in American Sloane Stephens — the seventh seed at the tournament and 2017 U.S. Open champion.

Fernandez, a wild card in Toronto, won her first pro tournament at the ITF Gatineau Challenger last month. That, followed by a finals appearance at Granby, Que., a week later, allowed the young Canadian to rocket 115 spots up the standings from the start of July to No. 260 entering Monday.

Fernandez played in last year’s Rogers Cup in Montreal as a 15-year-old, losing in the second round of qualifying.