This is the payoff.

LeBron is gone, and the East is wide open. The Toronto Raptors, along with the Milwaukee Bucks, Philadelphia 76ers and Boston Celtics, cruised through the first round with two combined losses.

It’s only slight hyperbole to say that every move the Raptors made in the past year was for this exact moment.

One year with Kawhi Leonard, to win at all costs. Maybe he stays, maybe he doesn’t — for now, that’s beside the point.

And then, a deadline trade for a dwindling superstar in Marc Gasol, who’s still savvy enough to play tough post defence against the top centres in the NBA — like Philadelphia’s Joel Embiid.

The dismissals of playoff disappointment DeMar DeRozan, and career Raptor Jonas Valanciunas made two things eminently clear: the NBA is about winning a title and the Raptors have never had a better shot.

On paper, Toronto matches up quite well with Philadelphia. Each team relies on its starting lineup, with minimal depth lying in the wait.

Still, we’ve seen how Leonard can handle 76ers point guard Ben Simmons defensively. In short, he has made the Australian’s life miserable.

In four games against the Raptors this season, Simmons has 25 turnovers — more than in any other matchup. A player who averaged 3.5 turnovers per game saw that number rise to 6.5 when facing Leonard.

Because of Simmons’ shooting yips — he shot 0-for-6 from the three-point range this season, and is 0-for-17 in his career — Leonard can sag off when Simmons has the ball and dare him to launch. The extra space allows Leonard to more easily disrupt Simmons’ passes and cut off his drives to the net.

Meanwhile, Gasol did receive two matchups with the Grizzlies against Embiid in which he forced the Cameroonian centre into 8-for-28 shooting and just 29 points total.

Embiid is a slower centre who likes to operate out of the post — a better, more evolved, version of Magic all-star Nikola Vucevic. Vucevic managed more than 11 points just once against Gasol and the Raptors, and shot 21-for-58.

Toronto is tied for the highest defensive rating (points allowed per 100 possessions) in the playoffs at 95.8. Conversely, the 76ers’ offensive rating sits at 115.7. It’s on that end of the floor where the series will be decided.

The Raptors coalesced after their disappointing Game 1 loss to Orlando. They never let the Magic score 100 points again, and a long-limbed, cohesive and tenacious defence emerged. 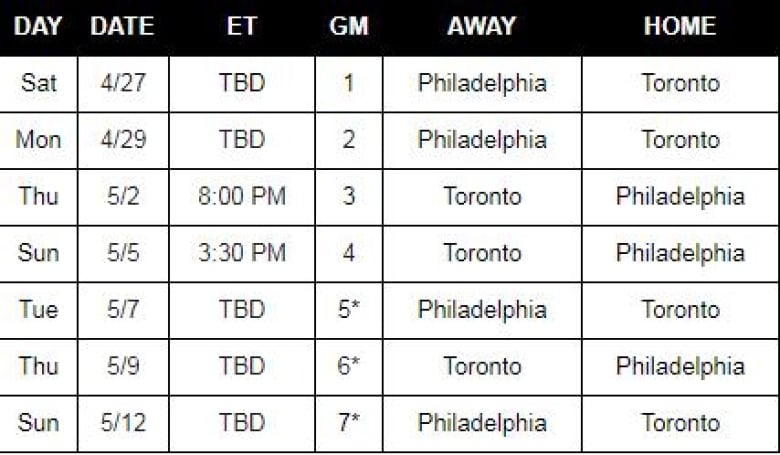 The leader of that defence wasn’t either of the defensive players of the year on the roster. It was six-foot-nothing Kyle Lowry, who leads the playoffs with 17 deflections, 12 loose balls recovered and seven drawn charges.

Those are all classified as “hustle” stats by the NBA. It’s a testament to Lowry’s head and heart that he ranks atop those categories.

Against the 76ers, Lowry could be tasked with chasing around three-point sniper JJ Redick. Lowry’s ability to stay close to the shooting guard will be a key component in stunting the 76er offence.

Offensively, the Raptors picked up where they left off in the regular season, for the most part. Despite being last among playoff teams in free throws per game, the Raptors’ offensive rating slots fifth overall.

Three pointers have fallen at 36.8 per cent, and the Raptors just set a franchise record with 34 assists in Game 5. Those will be important numbers to look for against the 76ers with Embiid waiting as a deterrent at the rim.

If the shots aren’t falling and the ball isn’t moving, Philadelphia boasts the individual defensive talent to shut down the Raptors. But it’s never come together on that end for the 76ers and the Raptors must take advantage.

Toronto is also excellent in its transition offence. More turnovers and more deflections will result in more run-out opportunities for the offence, and consequently more open looks at the rim and beyond the arc. 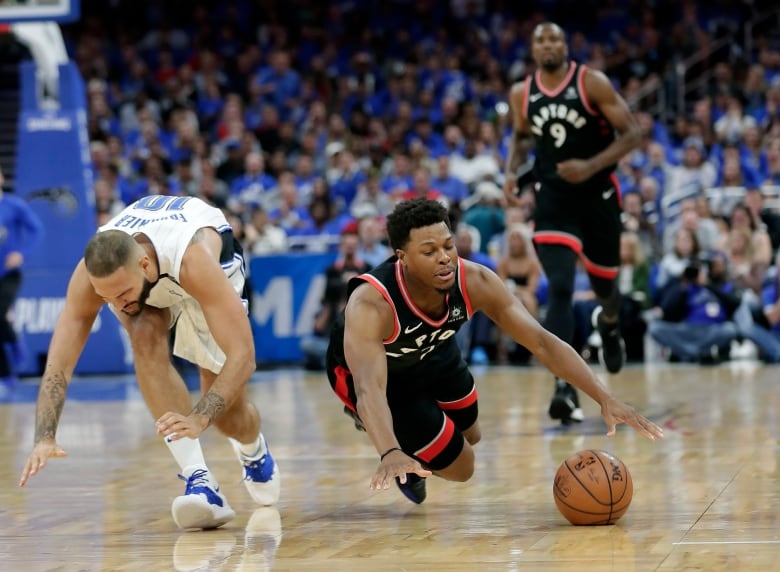 Lowry’s hustle was an important part of the Raptors’ defensive success against the Magic. (John Raoux/The Associated Press)

One of the greatest concerns down the stretch for the Raptors was chemistry. Lowry and Leonard both missed significant time, and their absences never overlapped. Gasol was only added at the deadline.

But the starting lineup with all three, along with Danny Green and emerging superstar Pascal Siakam, rolled down the stretch and trounced the Magic.

The 76ers dealt with similar turmoil, as trades and injuries led to constant upheaval in their rotations too. Somehow, they’ve had less time together than the Raptors’ starters — but were similarly dominant in their first-round matchup against the Brooklyn Nets.

Philadelphia added two pending free agents during the season in Harris and Jimmy Butler. It’s no secret how Toronto feels about this all-in season.

For one of these teams, the chickens are on their way home, ready to roost.