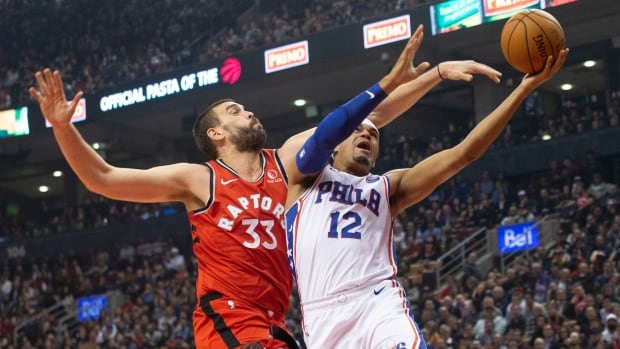 Pascal Siakam had 25 points to lead the Toronto Raptors to a 101-96 victory over Philadelphia on Monday, while holding 76ers centre Joel Embiid to zero points for the first time in his NBA career.

Fred VanVleet had 24 points and eight assists for the Raptors (12-4), who remain undefeated at home with seven consecutive wins at Scotiabank Arena. Rondae Hollis-Jefferson added 16 points, while OG Anunoby finished with 12, Terence Davis chipped in with 11, and Norm Powell added 10.

Josh Richardson had 25 points to top the Sixers (11-6), who lost for the first time in five games.

The game marked the first meeting between the two teams since Kawhi Leonard’s famous four-bounce buzzer-beating three-pointer in Game 7 of the Eastern Conference semifinals.

Kawhi Leonard poured in 41 points, including a dramatic game-winner as the Toronto Raptors beat the Philadelphia 76ers 92-90 to advance to the Eastern Conference Finals. 1:23

Poor shooting plagued both teams in an ugly first half, but no one struggled more than Embiid, who was held scoreless — 0-for-4 — in the first half for the first time in his career.

The Raptors took an 81-80 lead into an entertaining fourth quarter in front of a rowdy Scotiabank Arena crowd reminiscent of the playoffs. With 8:01 to play, Richardson was awarded three free throws after a questionable foul by Davis. Toronto rapper and the team’s global ambassador Drake jeered Richardson from his court-side seats, and the crowd cheered wildly as Richardson missed all three shots.

Tobias Harris’s driving hook shot put the Sixers up by six points with 5:16 to play. A couple of terrific VanVleet plays — he tossed a falling-down pass to Powell for a three-pointer, then added a three of his own — pulled Toronto to within two with 3:10 to play.

With 1:01 to play, Siakam spun around Al Horford and picked up a foul from Embiid to give the Raptors a one-point lead. Then Siakam got his hands on a ridiculous Ben Simmons pass. VanVleet connected on two free throws at the other end, then Siakam went end-to-end for a dunk at the final buzzer.

Toronto’s roster Monday looked nothing like the squad that dispatched Philly in thrilling fashion last spring. Leonard left for the L.A. Clippers in the off-season. And Kyle Lowry (fractured thumb) and Serge Ibaka (ankle strain) were on the bench nursing injuries for the eighth consecutive game. Matt Thomas also sat out the game after fracturing his left middle finger in Saturday’s 119-116 win in Atlanta.

PASCAL’S MADE FOR THE MOMENT <a href=”https://t.co/Sxk31aiXMl”>pic.twitter.com/Sxk31aiXMl</a>

“We don’t want to lose anybody else,” Raptors coach Nick Nurse said. “Seems like we got quite a few guys out, but on we go. On we go.”

Nurse hopes to have Ibaka back on Sunday when Toronto hosts the Utah Jazz, and said a few days ago that he was “shooting for” a Sunday return Lowry as well.

The Sixers made some key off-season changes as well, adding Horford and Richardson. Gone are Jimmy Butler and JJ Redick.

Despite their short-handed roster, Nurse agreed the game was a good early-season gauge.

“Obviously, you’d like to measure a little bit more with your full complement of guys,” Nurse said. “Some of these younger guys, or new guys, it’s a test to see how they’ll match up with a team that’s obviously going to be in the hunt for the Eastern Conference Championship at the end of the year.”

The Raptors shot off-target to start the game, hitting just four of their 13 three-point attempts in the first quarter. They trailed the Sixers 34-28 to start the second.

Richardson’s pullup jumper early in the second quarter had Philly up by eight, but Toronto responded with 16-3 run capped by a Siakam turnaround hook shot for a five-point lead. The Raptors took a 51-49 advantage into the halftime break.

There were wide smiles on Toronto’s bench when Nurse challenged an officials call and won for just the second time since the new rule was implemented this season. The call resulted in an offensive foul against Simmons.