Police in France are bracing for another round of angry, national protests on Saturday, part of an ongoing popular rebellion against Emmanuel Macron's plan to bring in a carbon tax.

The "yellow vest" demonstrations, which have seen protestors dressed in the fluorescent safety jackets that all French motorists must carry in their vehicles, started in reaction to the government's plan to increase "green" levies on fuel. As of Jan. 1, drivers will pay 6.5 euro cents per litre more for diesel, and 2.9 cents more for gasoline.

But over the past two weeks they have morphed into a much wider expression of dissatisfaction with everything from politicians' salaries, to foreign asylum seekers, to France's weak pay equity laws.

Hundreds of thousands of people have participated in blockades of roads, highways and fuel depots, and there have been some violent clashes with police, most notably last weekend in Paris. 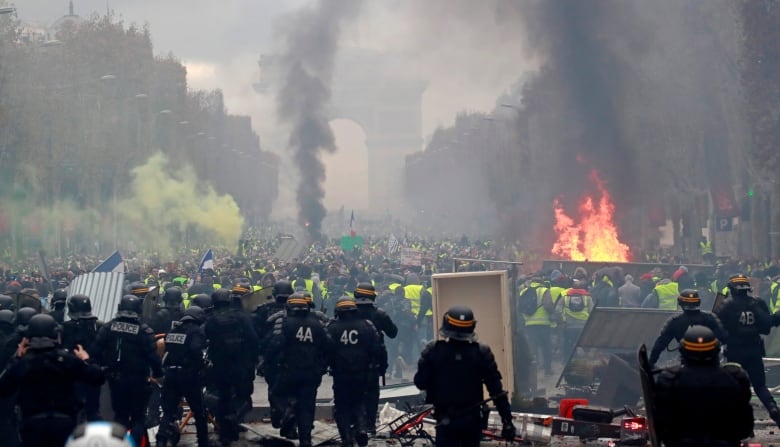 Protesters wearing yellow vests run from police as a demonstration turned into a riot on the Champs-Elysees in Paris last Saturday. (Gonzalo Fuente/Reuters)

Macron has announced three months of public consultations on his plan, and says he is willing to do more to help cushion the blow to low-income families and those who live in rural areas, but he is not backing down.

"It will fall on me to take additional steps in the weeks and months to come, but they will never be a step backwards," the French president told reporters today at the G20 summit in Buenos Aires.

Meanwhile, the protests are spreading.

Today, Annick Girardin, the French minister of overseas territories, needed a police escort to get away from jeering demonstrators on the Indian Ocean island of Réunion.

Yellow vest protesters speak to French Overseas Minister Annick Girardin as she leaves in a car at Le Port, west of the Indian Ocean island of La Reunion, on Friday. (Richard Bouhet/AFP/Getty Images)

And in Belgium, authorities fired tear gas and water cannons at an unruly crowd of yellow vests in central Brussels who destroyed a couple of police vans and threw rocks at the office of Prime Minister Charles Michel, a liberal Macron ally.

In preparation for tomorrow's marches in Paris, workers have been erecting metal barriers and boarding over storefronts along the upscale Champs Élysées, the scene of last week's clashes. 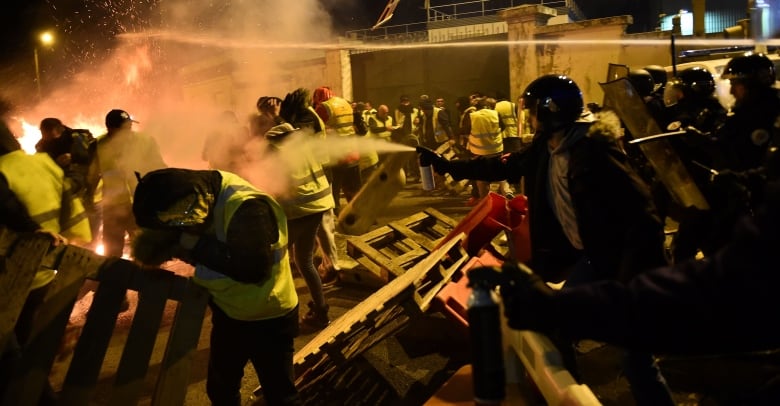 Christophe Castaner, the French interior minister, has announced that access to the area will be "very tight," with ID checks, bag searches and all roads closed to vehicles. As many as 5,000 police are expected to be in place to greet the protestors.

Earlier this week, a government minister met with a delegation of yellow vests in an attempt to broker some sort of truce, but things didn't go well. The movement, which has been powered by social media, has no agreed-upon leaders, and seems to be attracting people from across the entire political spectrum, from far-left to far-right. An online petition against the gas tax hike has attracted more than one million signatures.

So far, public sympathy seems to lie with the protestors. A poll released this week found that 66 per cent of respondents backed the demonstrations, and almost 80 per cent opposed the new fuel taxes. 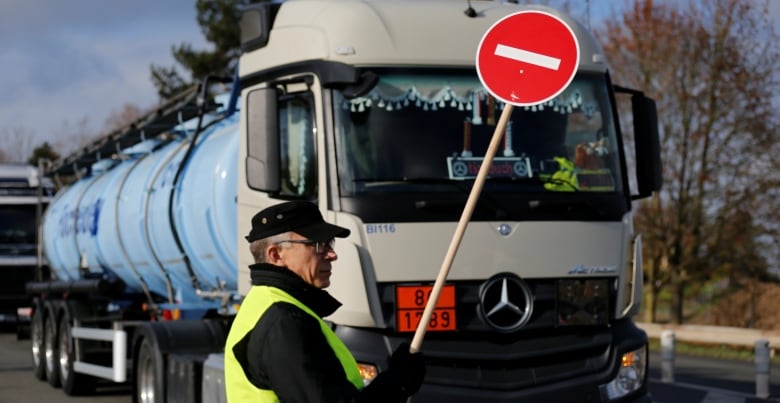 A protester wearing a yellow vest blocks trucks and slows traffic Friday at the approach to the A2 Paris-Brussels Motorway, in Fontaine-Notre-Dame, France. (Pascal Rossignol/Reuters)

And Macron is plumbing new depths when it comes to his own popularity, with just 26 per cent of French voters now expressing a favourable opinion. That's well below the rating that former president François Hollande had at the same point in his term, and behind even the much-hated Nicolas Sarkozy.

France's Finance Minister, Bruno Le Maire, has warned that the protests will have a "serious economic impact" if they don't end soon.

But with his boss holding fast on the gas tax, it seems likely that the yellow vests will be in the streets for weeks to come.

A flashback to the turn of the century is providing fodder to some of today's biggest stars — and by that we're talking 1998-2004, not the 1900s. This burst of creative nostalgia is hitting its peak with the release of Ariana Grande's thank u, next video, in which the superstar mines some of the biggest movies of that era. On tonight's Pop Panel we ask what the appeal of that time is for the culture-makers of today, writes producer Tarannum Kamlani.

This week, Ariana Grande broke the internet with a teaser trailer for her upcoming video, thank u, next.  (Yes, we live in a time where a five-minute music video gets its own trailer).

The video draws inspiration from the beloved 2004 Tina-Fey-helped classic Mean Girls, as well as Bring It On, Legally Blonde and 13 going on 30.

Earlier this fall, British pop star Charli XCX teamed up with Troye Sivan on this video for their song 1999, which crams in so many late '90s and early '00s references that you can barely keep track. Here's a start: Titanic, Britney Spears, Steve Jobs, Eminem, The Spice Girls, TLC's Waterfalls video, The Matrix, Marilyn Manson and Dita Von Teese … I could go on.

So what is it about that period in pop culture that these pop stars and others are trying to tap into? Is it something about the movies/songs/stars of that period? Or a longing for a simpler time, when kids were just learning to connect with each other on the internet via MySpace and MSN Messenger, and revelling in the freedom and wonder of Napster?

Also this week on the Pop Panel, we're trying something new.

Each of our panelists offers their take on a pop culture storyline — Margaret Atwood's recently announced follow-up to her classic, A Handmaid's Tale, why Oscar contender Green Book is problematic, and a look at the first tentative steps back into public life for formerly troubled teen star Amanda Bynes

I hope you'll join us!

Photographer Evan Mitsui and The National co-host Adrienne Arsenault toured Edward Burtynsky's latest show and spoke to him about where his inspiration springs from.

For better — or in many cases for worse — humans have become the dominant force on Earth. That's the premise behind photographer Edward Burtynsky's Anthropocene Project.

There's a film, as well as a pair of shows at the Art Gallery of Ontario in Toronto and the National Gallery of Canada in Ottawa. The name, Anthropocene, is a label some scientists are using to describe this period of Earth's timeline — a time in which humans, more so than nature, are leaving the most noticeable marks on the planet. 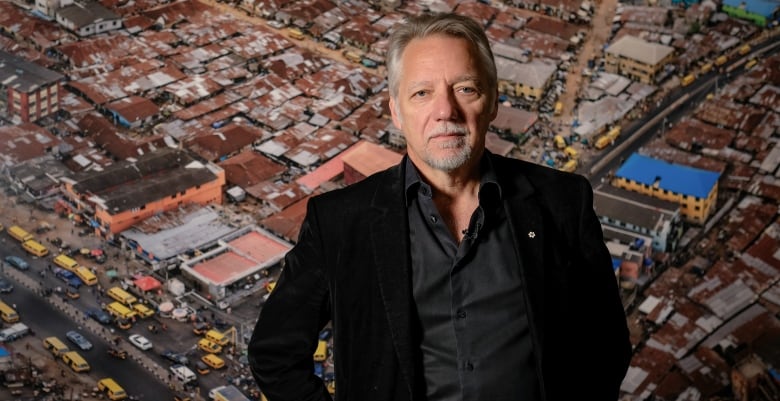 Edward Burtynsky’s Anthropocene Project looks at the massive impact that everyday human activities are having on the Earth and its environment. (Evan Mitsui/CBC)

Those marks, in the form of gaping open-pit mines, oil-fouled estuaries and a city-sized garbage dump, are the places where Burtynksy has trained his lens. His images are both strangely beautiful and serve as a first-hand account of the Earth's ongoing destruction at the hands of people.

"I want you to be drawn in and to go in deeper — it almost has to be beautiful to keep you there long enough. To [make you] really look," he replied. 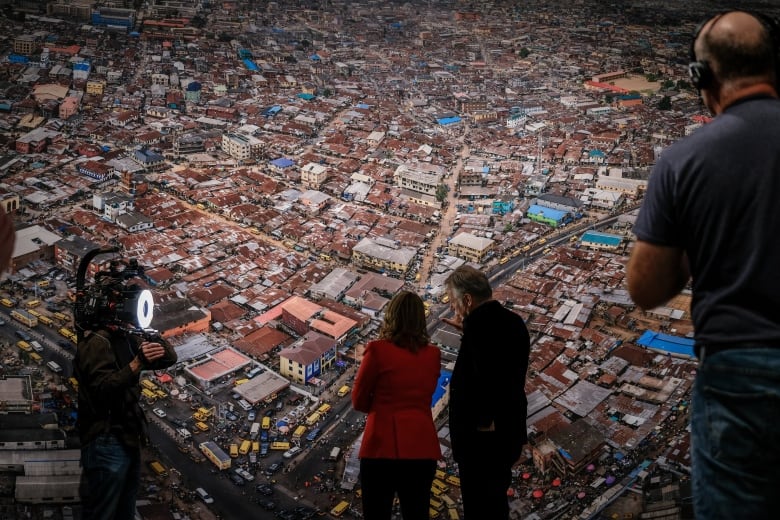 The prints in the Anthropocene show are massive. This one depicts Mushin Market in Lagos, Nigeria. (Evan Mitsui/CBC)

One would be forgiven for becoming lost in the tragic beauty of each individual image. But in order to have the maximum impact — to turn the lens back on the viewer and potentially inspire people to re-evaluate the environmental impact of their own actions — Burtynsky says the project is meant to be seen as a whole.

"If you look at the project in aggregate, they all begin to tell the same story," Burtynsky says.

"These are all places that we've created that support our daily lives. These are extensions of who we are that we don't ever see. So I'm just trying to be a kind of conduit into those worlds."

One of the worlds Burtynsky and his crew ventured into is the landfill in Nairobi, Kenya, known as Dandora. The neighbourhood-sized area is home to about 6,000 people. 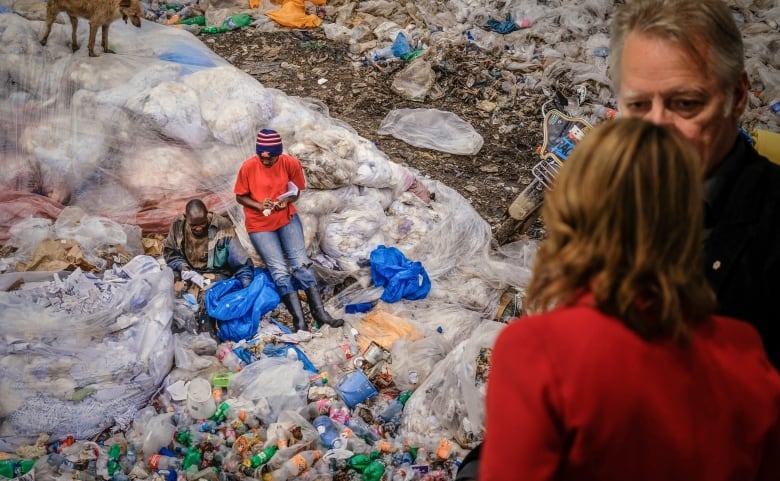 Burtynsky shows Adrienne Arsenault his image of a huge landfill in Nairobi, Kenya, known as Dandora. He says his goal with the photos is to make people 'really look' and see how the biggest effects of their day-to-day actions may be most visible in places where they don't live. (Evan Mitsui/CBC)

Life in Dandora revolves around separating plastics and paper and metal.

"You get paid by the kilogram of whatever you've separated that day. So it's a very kind of marginal existence. But in this image I wanted to make [the viewer] aware of this world of plastic we've created," Burtynsky said.

"We live in this contradiction. It's hard to be a human being and not feel guilty about every day of your life, you know? 'I'm in my gas-guzzling car,' and 'Oh, I love a steak once-in-a-while,'" he added.

"In the past, no-one ever felt guilty about, you know, eating something or getting a ride somewhere or going on vacation on a jet. But now we realize that collectively we're undoing some of the systems on the planet. So it's almost like, you know, we're guilty by being alive."

How to alleviate that guilt?

Burtynsky suggests planting trees and taking steps to carbon-offset travel. And if the Trudeau government's carbon pricing plan pans out, he says that could help, too. 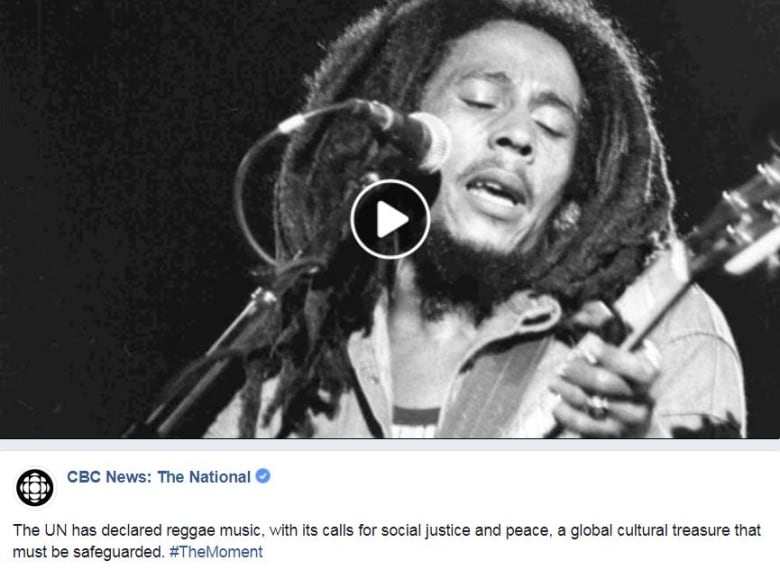 "The suggestion that the production order would interfere with Vice Media's newsgathering and publication functions shrivels in a context where the source was not a confidential one and wanted everything he said to be made public …. Accordingly, the benefit of the state's interest in obtaining the messages outweighs any harm to Vice Media's rights."

– The Supreme Court of Canada's ruling, handed down this morning, in R. v Vice Media Canada Inc. The case involved the RCMP's efforts to force a journalist to hand over details of his communications with a man who had left Calgary to join the Islamic State in Syria.

The small, birch plywood guitar — homemade by his uncle as a Christmas present for a five-year-old Stan — looks more like a ukulele in Rogers' enormous paws. But he can still make it sing. This post-performance interview with Paul Soles on Canada After Dark veers into talk of railroads, the backstory of Barrett's Privateers, and Rogers' downhome connection to his grandmother's kitchen in Hazel Hill, N.S.

The folk musician talks about his Nova Scotia roots and strums the guitar he received as a five-year-old. 7:44