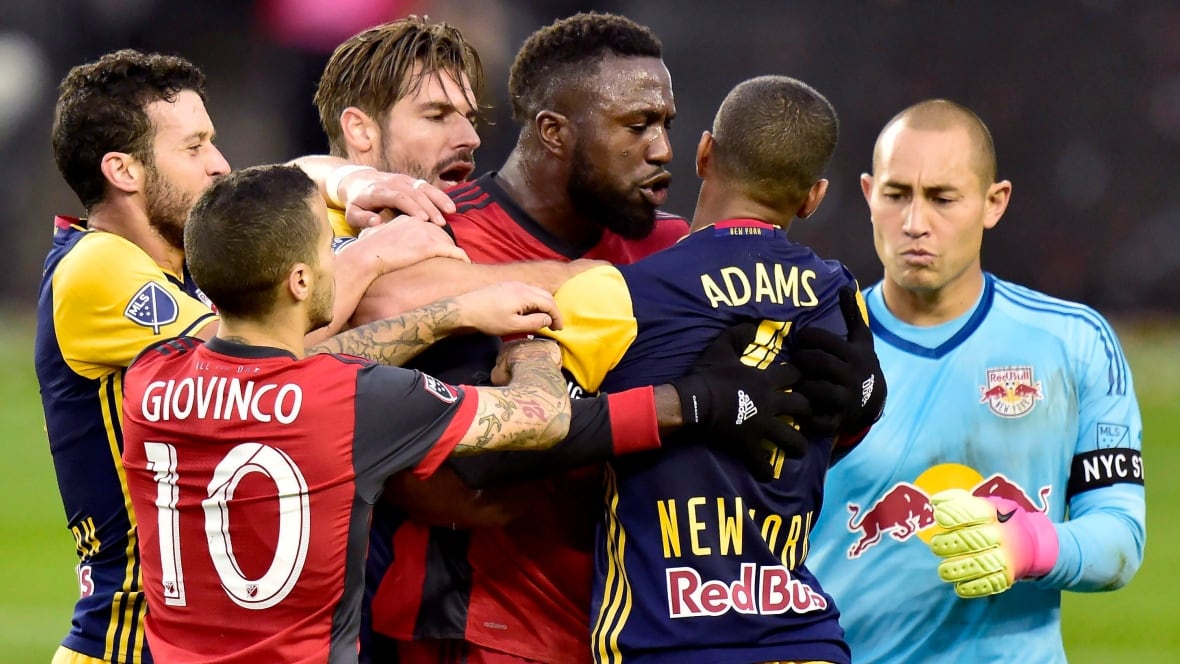 The news, while perhaps not unexpected, was not good for Toronto FC on Wednesday.

An independent panel upheld referee Chris Penso’s decision to issue a red card to Altidore for violent conduct, rejecting Toronto’s appeal. The decision means both of Toronto’s star strikers are suspended for the Nov. 21 start of the Eastern Conference final in Columbus.

Sebastian Giovinco got a one-game ban after picking up two yellow cards — for time wasting and dissent — over the two-leg conference semifinal win over the New York Red Bulls.

Altidore and Red Bulls captain Sacha Kljestan were ejected after the two teams clashed in the BMO Field tunnel at halftime of Game 2 of the semifinal Nov. 5.

Both teams appealed their red cards with Toronto saying its security camera footage showed their man was not at fault.

“The burden of proof for us was to unequivocally prove that what we think and what we understand to have happened did happen,” said Toronto coach Greg Vanney. “We weren’t able to do that conclusively with the video because there’s still little gaps in the video.”

There was no immediate word on the Red Bulls’ appeal of the incident.

The three-person independent panel is made up of representatives from the U.S. Soccer Federation, the Canadian Soccer Association and the Professional Referee Organization.

Each MLS club is entitled to two unsuccessful appeals per season, including the playoffs.

Altidore, who had expressed confidence that the video would vindicate him, did not speak to the media Wednesday. Vanney described him as frustrated.

The incident may not be over. Both Altidore and Kljestan could face supplemental punishment from the league’s disciplinary committee, which is comprised of three former MLS players, one former MLS coach and a former MLS referee.

That committee can add to the mandatory one-game suspension for a red card and/or issue a fine for “those offences the committee deems to be of an egregious nature, or where the committee believes it must act to protect player safety or the integrity of the game.”

Altidore and Kljestan had words late in the first half after Altidore went to the defence of Giovinco, who was facing up with Tyler Adams. Kljestan ended up shoving Altidore, who toppled — somewhat easily — backwards.

Altidore was still steaming when the half ended, his ire heightened after the fourth official ran onto the field to steer him away from another perceived potential incident. He went into the tunnel with Kljestan behind him.

What happened inside depends on who you speak to.

Altidore said the Red Bulls star midfielder tried to grab him from behind, so he pushed him away. Kljestan said Altidore was the aggressor, shoving him against the wall.

Fan video shows a scrum of players, coaches and security with the Red Bulls near the Toronto locker room. The visiting team is supposed to turn left after exiting the field to get to its own dressing room.

Vanney, who said the angle of the tunnel security camera did not catch everything, knew it would be tough to overturn a referee’s decision “without real conclusive evidence.”

“I knew that it was always going to be a challenge for us,” he said. “The question was did we have enough information, did we have enough footage to be able to change not just the opinion but the facts of the situation. And we didn’t.”

“Disappointing, for sure,” captain Michael Bradley, speaking in an interview with TSN radio, said of the failed appeal.

Altidore (16 goals) and Giovinco (15) accounted for 42 per cent of Toronto’s league-leading 74 goals this season. That included nine game-winning goals.

On the plus side, Toronto routed Columbus 5-0 at BMO Field on May 26 without Altidore (suspended) and Giovinco (injured).

Barring a ruling by the disciplinary committee, both strikers will be back for the second leg against Columbus at BMO Field on Nov. 29.