Tropical Storm Florence keeps drenching the central Carolinas and is expected to generate up to 380 millimetres of rain before it swings north over the Appalachian Mountains and into the Ohio Valley on Monday.

As of 5 a.m. ET, top sustained winds had dropped to near 80 km/h with higher gusts, and Florence is expected to become a tropical depression later Saturday, the U.S. National Hurricane Center said. 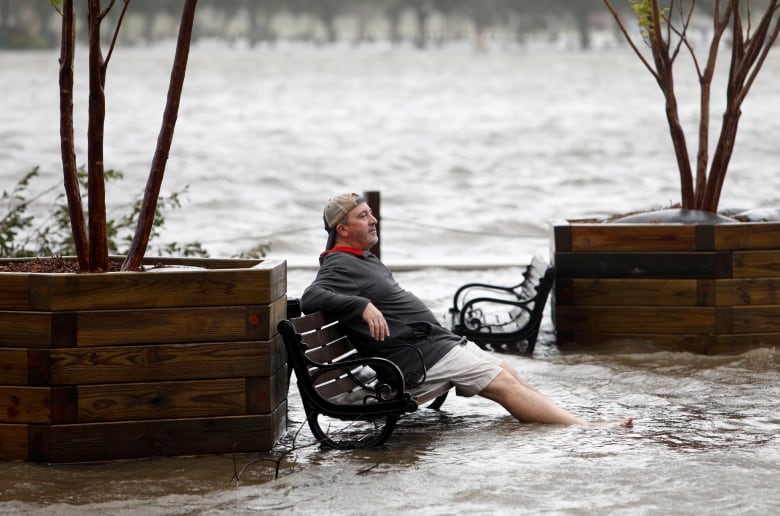 A man sits on a park bench in a flooded park as the Cape Fear River rises above its usual height in Wilmington, N.C., on Friday. (Jonathan Drake/Reuters)

The centre of the slow-moving storm, downgraded from a Category 1 hurricane after it came ashore Friday afternoon, was nearly stalled over South Carolina early Saturday, about 55 kilometres west of Myrtle Beach, moving west-southwest at just 8 km/h and scooping massive amounts of moisture from the sea.

"Rivers are rising to dangerous levels, and the relentless rains will continue through the weekend," North Carolina Gov. Roy Cooper warned on Friday.

At least five people have reportedly been killed.

A mother and her eight-month-old baby were killed Friday when a tree fell on a house, according to a tweet from police in Wilmington, N.C. The father was transported to a hospital for treatment.

The Cape Fear River flooding into downtown Wilmington <a href="https://t.co/Eml24WjliX">pic.twitter.com/Eml24WjliX</a>

The monster storm could dump drenching rains of up to one meter. That, in turn, could trigger epic flooding well inland.

Cooper called Florence the "uninvited brute" that could wipe out entire communities. The storm is some 645 kilometres wide.

Strong winds and heavy rain continue to present a danger, and Florence is now being attributed to several deaths. 4:13

Power outages are widespread, affecting over 740,000 homes and businesses in North Carolina and 163,000 in South Carolina. Rescue crews have used boats to reach hundreds of people trapped by the rising waters.

The Cape Fear River has overrun its banks, allowing water to pour into the downtown area of Wilmington.

The National Weather Service says the worst flooding will likely start Saturday night or Sunday morning and will continue for several days.