Russia's coast guard opened fire on and seized three of Ukraine's vessels Sunday, wounding two crew members, after a tense standoff in the Black Sea near the Crimean Peninsula, the Ukrainian navy said.

Russia blamed Ukraine for provoking the incident, which sharply escalated tensions that have been growing between the two countries since Moscow annexed Crimea from Ukraine in 2014, and it has worked steadily to bolster its zone of control around the peninsula.

Nikki Haley, the U.S. ambassador to the United Nations, said an emergency meeting of the UN Security Council has been called for 11 a.m. ET Monday over the escalating situation.

Earlier on Sunday, Russia and Ukraine traded accusations over a separate incident involving the same vessels, prompting Moscow to block passage through the narrow Kerch Strait, which separates the Crimean peninsula from the Russian mainland.

The Ukrainian navy said two of its gunboats were struck and Russian crews boarded and seized them and an accompanying tugboat.

Russia's Federal Security Service, known as the FSB and which oversees the coast guard, said there was "irrefutable evidence that Kiev prepared and orchestrated provocations … in the Black Sea. These materials will soon be made public."

The FSB confirmed early Monday that it fired on the vessels to force them to stop, and then seized them. 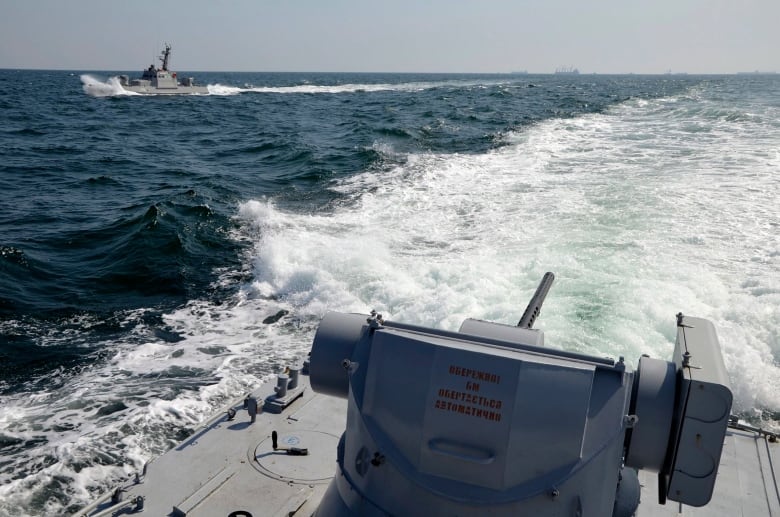 The European Union and NATO called for restraint from both sides and for Moscow to restore access to the strait, which Ukraine uses to move ships to and from ports on either side of the peninsula.

Ukrainian authorities said they had given advance notice to the Russians that the vessels would be moving through the strait, which connects the Black Sea to the Sea of Azov.

Russia said the three Ukrainian vessels made an unauthorized passage through Russian territorial waters, while Ukraine alleged that one of its boats was rammed by a Russian coast guard vessel.

The tugboat, which was rammed, was travelling with the two Ukrainian gunboats from Odessa on the Black Sea to Mariupol, an eastern Ukraine port, via the Kerch Strait. 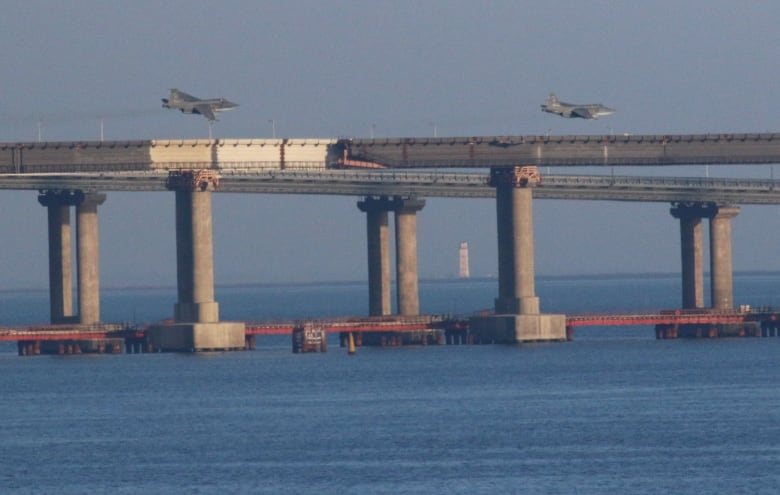 Russian jet fighters fly over a bridge connecting the Russian mainland with the Crimean Peninsula on Sunday. (Pavel Rebrov/Reuters)

"Russian coast guard vessels … carried out openly aggressive actions against Ukrainian navy ships," the Ukrainian statement said, with the tugboat suffering damage to its engine, hull, side railing and a lifeboat.

The Kerch Strait is the only passage into the Sea of Azov. The strait is spanned by the recently completed Kerch Bridge, connecting Crimea to Russia. Transit under the bridge has been blocked by a tanker ship, and dozens of cargo ships awaiting passage are stuck.

Russia has not given any indication of how long it will block the strait, but a long-term closure would amount to an economic blockade of Ukrainian cities on the Azov coast. Russia's Black Sea Fleet greatly outmatches the Ukrainian navy.

Ukrainian ports on the Sea of Azov include strategically vital centres such as Mariupol, the closest government-controlled city to Donetsk and Luhansk, the breakaway regions of eastern Ukraine controlled by Russia-backed separatists. Thousands of people in those regions have been killed in fighting between Ukrainian troops and the separatists since 2014.

The FSB told Russian news agencies on Sunday after the first incident that the Ukrainian ships held their course and violated Russian territorial waters.

"Their goal is clear," an FSB statement said — "to create a conflict situation in the region." The statement didn't mention ramming a Ukrainian tugboat.

Though a 2003 treaty designates the Kerch Strait and Sea of Azov as shared territorial waters, Russia has been asserting greater control over the passage since 2015. 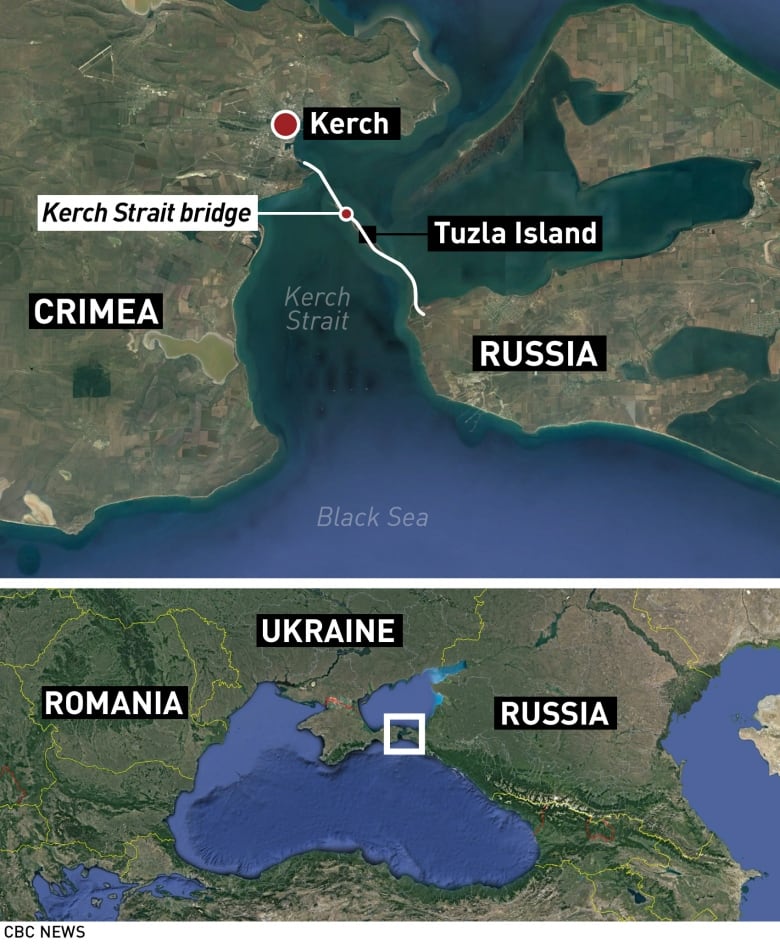 The Ukrainian Foreign Ministry said in an earlier statement that Russia's actions were a violation of the UN Charter and international law, and pledged to "promptly inform our partners about Russia's aggressive actions."

"Such actions pose a threat to the security of all states in the Black Sea region," the statement said, "and therefore require a clear response from the international community."

Ukrainian President Petro Poroshenko, after a meeting with his National Security Council, said in a statement he would ask parliament Monday to take up the issue of whether to implement martial law over the incident.

About 50-100 people gathered outside the Russian Embassy in Kyiv to protest Moscow's actions. 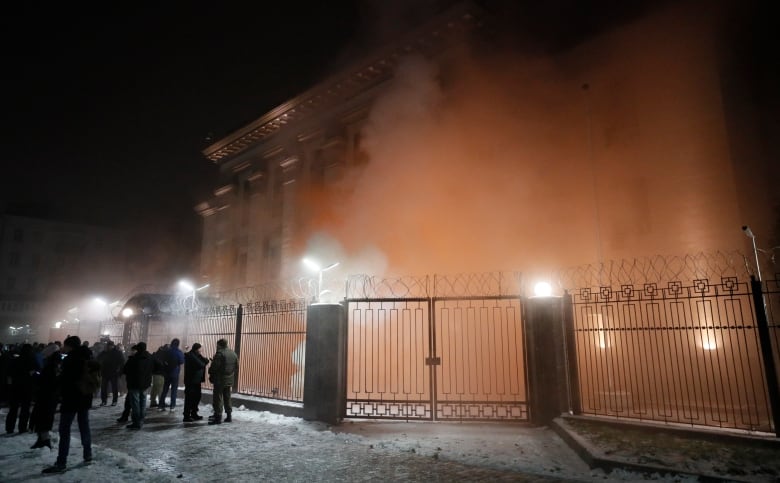 Smoke from a flare thrown by a protester is seen during a rally in front of the Russian Embassy in Kyiv on Sunday. (Gleb Garanich/Reuters)

Dmitry Kiselyov, a commentator on the state-controlled Rossiya channel, told viewers of his Sunday evening news program that Ukrainian President Petro Poroshenko — encouraged by the U.S. — is looking to pick a fight with Russia in the Black Sea.

The talk show host also said that the U.S. talked Poroshenko into staging a provocation against Russia as a means to disrupt the upcoming meeting between Presidents Vladimir Putin and Donald Trump at this week's Group of 20 summit in Argentina.

"What is happening now at the [Kerch] bridge threatens to turn into a very unpleasant story," Kiselyov warned.