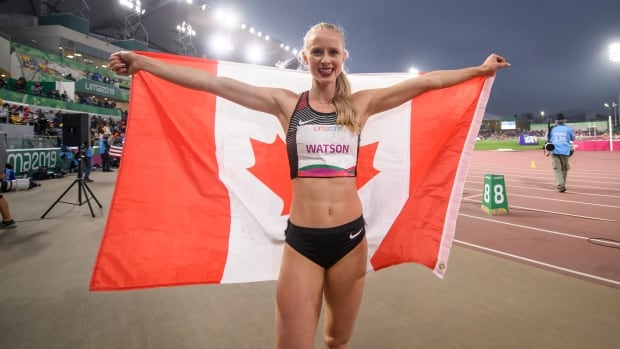 Sage Watson won gold in the women’s 400-metre hurdles Thursday as Canada continued to pile up track and field hardware at the 2019 Pan American Games.

Watson, from Medicine Hat, Alta., ran to gold in a season-best time of 55.16 seconds. Anna Cockrell of the United States was second in 55.50 seconds and Rushell Clayton was third in 55.53 seconds.

The result was appealed after the race, but Watson was confirmed the champion after a lengthy review.

“I felt very confident going into it,” Watson said. “I just trusted myself and I just went for the win. I knew that was something I had to do if I wanted to get a medal and I’m just so excited and happy to come away with the win.

“I made a few mistakes, but overall, you know, when you’re running to win, it doesn’t matter as long as you get across that line.”

“I had gold in my mind, absolutely,” Paulson said. “I made my move on the back straight and tried to make a long run for it. The gap opened up and I just went for it.

“Coming into the home stretch I thought I had it but obviously I didn’t quite hold on in the last 30 meters. I’m a little disappointed but obviously super happy to get a medal.”

Newman, from Delaware, Ont., who came into the Games having set two Canadian records, finished third with a vault of 5.55 metres. Cuba’s Yarisley Silva Rodriguez finished first at 4.75, followed by Kathryn Nageotte of the United States at 4.70.

“It was a pretty strong headwind so I think a lot of the girls just try to sit and wait as long as they could to get either a tail or a tail wind. So I guess that’s what was the only thing we really adjust,” Newman said. “We did bring like all our bed stuff, sheets and stuff from the village and we layered up so that was good. I guess Canadians were used to the cold so it wasn’t too bad.”

“We adjusted our race plan to go a bit faster off the start because we knew the Chileans had a fast start,” Werbicki said. “We took the start a bit more aggressive and we found ourselves in second place coming through the 1000 and we were pretty relaxed about that.”

Werbicki and Loutit’s are making their Pan An debut. Thursday’s silver is Loutit’s first international medal. Werbicki previously won silver at the 2014 world junior championships and bronze at the 2014 youth Olympic Games.

Parsons was a late addition to Canada’s wrestling team after an injury to Diana Weicker.

“Well, it was definitely a surprise. I found out that I was coming on Friday and by Saturday I was here,” Parsons said. “Luckily, everyone at home was super supportive and I felt as ready as I would have been if I had come earlier or would have known earlier. I prepared as best as I could for this situation.

“It’s unfortunate that Diana couldn’t make it but I’m very happy that it was me that was the alternate because this experience has been fantastic.”

Canada advanced to the women’s semifinals with a 22-3 win over Venezuela. Montreal’s Krystina Alogbo led the way with five goals on seven shots. Canada faces Brazil in Friday’s semis.

The men’s team also advanced to the semifinals with a 13-11 win over Mexico. Reuel D’Souza of Port Coquitlam, B.C., had four goals on six shots and Nicolas Bicari of Repentigny, Que., added four goals on eight shots.

Canada’s women’s foil team took silver after losing 45-39 to the United States in the final.

“It’s a little bittersweet,” Calgary fencer Alanna Goldie said. “We’re always happy to get a medal, but we always want to win and we won last time 1/8at TORONTO 2015 3/8 so it’s kind of bitter right now.”

Canada’s men’s team scored three goals from penalty corners in a 3-2 semifinal win over Chile. Canada will face Argentina on Saturday for Pan Am gold and a berth in the 2020 Tokyo Olympics.

“We have to prepare really well, to recover. But if we come with a good gameplan, a good mentality we will get some opportunity,” said Vancouver’s Scott Tupper. “We look to put our best foot forward and hopefully come away with a gold medal. That hasn’t been done for a while and we would like to do it this year.”