It was called “collateral” — nude photos and other embarrassing material that female members of an upstate New York self-improvement group turned over to their “masters” to ensure obedience, silence and sexual fealty to the organization’s spiritual leader, Keith Raniere.

Now some former members of the group, NXIVM, are poised to break their vow of silence for the first time by testifying against Raniere, who has been compared to a cult leader. Opening arguments are set for Tuesday at a U.S. federal court in Brooklyn, N.Y.

Among the more sensational allegations: some women “slaves” in a secret NXIVM sorority were branded with Raniere’s initials as part of their initiation, while others were threatened with the release of their collateral if they didn’t have sex with him.

Prosecutors have been tight-lipped on who will testify about the sorority, called DOS, an acronym for a Latin phrase roughly translated as “Lord/master of obedient women.” There’s speculation that former members of Raniere’s inner circle including TV actress Allison Mack and Lauren Salzman, the daughter of the group’s top executive, could testify against him.

U.S. District Judge Nicholas Garaufis has yet to rule on a request by prosecutors to protect the privacy of some alleged victims, referred to as “Jane Does” in court papers, by only using their first names, nicknames or pseudonyms while they testify — measures needed to protect them from “potential harassment” and “undue embarrassment.”

Raniere, 58, has pleaded not guilty to sex-trafficking and other charges. His lawyers have opposed what they call “unusual and dubious” protections that would violate his constitutional right to confront his accusers. They add it would “unfairly signal to the jury that, in the court’s view, the witness is a victim of a sex crime who is in danger.”

Either way, the case has resulted in a dramatic downfall for Raniere from a time when he was known as “Vanguard” by devotees in the United State and Mexico.

Promotional material for the now-disbanded NXIVM once hailed him as a “scientist, mathematician, philosopher, entrepreneur, educator, inventor and author” who has “devoted his life to developing new tools for human empowerment, expression and ethics.” 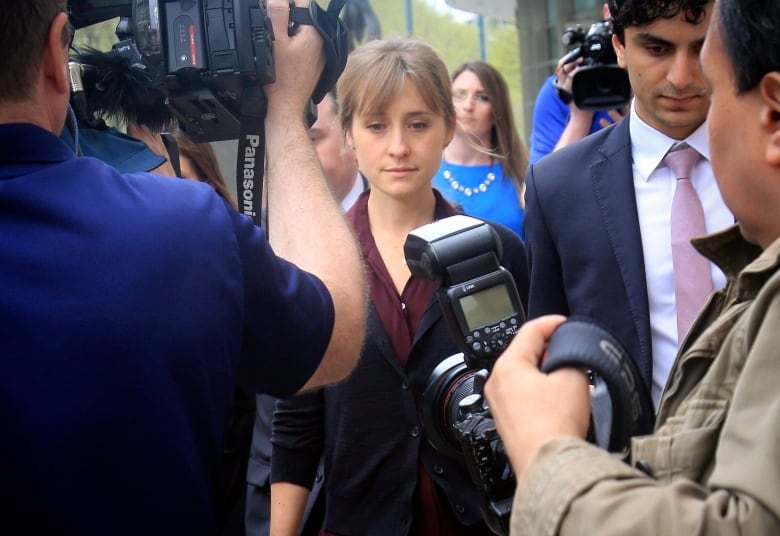 Smallville actress Allison Mack was arrested for her alleged role in NXIVM. She could take the witness stand against Raniere during the trial in Brooklyn, N.Y. (The Associated Press)

Last year, after a New York Times expose on the group and reports that investigators were interviewing some women who had defected from DOS, Raniere fled to Mexico. He was ultimately found staying with Mack and other women in a luxury villa in Puerta Vallarta and was taken into custody on a U.S. warrant.

Mack, best known for her role as a young Superman’s close friend on the series Smallville, also was charged, along with Clare Bronfman, an heir to the Seagram liquor fortune who bankrolled NXIVM. Salzman and two others also faced charges. But after prosecutors added child exploitation charges against Raniere earlier this year based evidence he had sex with a 15-year-old girl, all of his co-defendants pleaded guilty.

Salzman admitted in her guilty plea they she held a Mexican woman hostage in an upstate home for more than two years under threat of having her deported, “if she did not complete labor requested by myself and others.”

At her plea hearing, Mack tearfully said she had collected “collateral” against women and expressed regret about getting involved with Raniere — a change of heart from when she told the New York Times that, as one of the DOS “masters,” she saw the women’s servitude and willingness to be branded as acts of devotion.

Authorities say the branding was done using a cautery pen without anesthesia by a doctor who is now under investigation by state health officials. 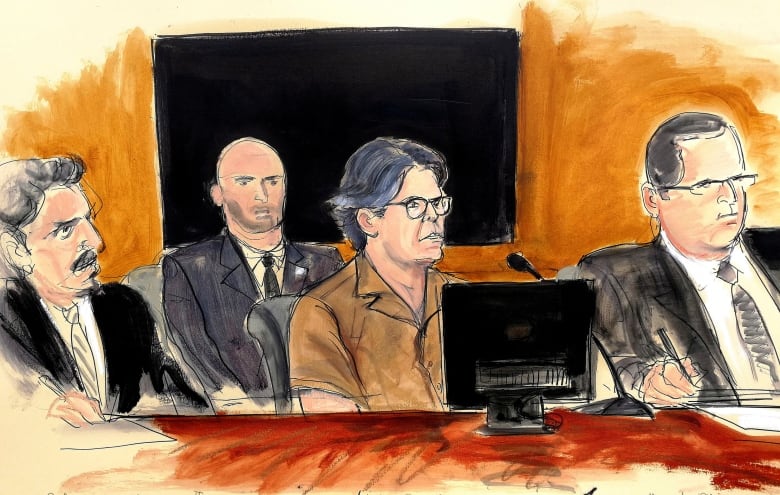 In this April 13, 2018 courtroom sketch Keith Raniere, second from right, attends a court hearing in Brooklyn. Raniere has pleaded not guilty to charges accusing him of forming a secret society within his organization that forced women to have sex with him. (Elizabeth William via Associated Press)

Eight “Jane Does” in that case have refused to answer questions, saying through their lawyers “the branding was a voluntary free expression of personal beliefs.”

In the court papers, defence lawyers have similarly claimed the alleged victims were never abused. The women are instead described as “independent, smart, curious adults” in search of “happiness, fulfillment and meaning.”

But legions of NXIVM defectors and detractors have called the self-help rhetoric a brainwashing device that has destroyed lives.

Among the most vocal opponents has been TV actress Catherine Oxenberg, of Dynasty fame, whose daughter is a former NXIVM member and once revealed to her mother she had been branded and considered it “character building.”

Hearing that, “My heart broke into a millions pieces,” Oxenberg said at a recent forum on the subject. “I knew I had lost her.”