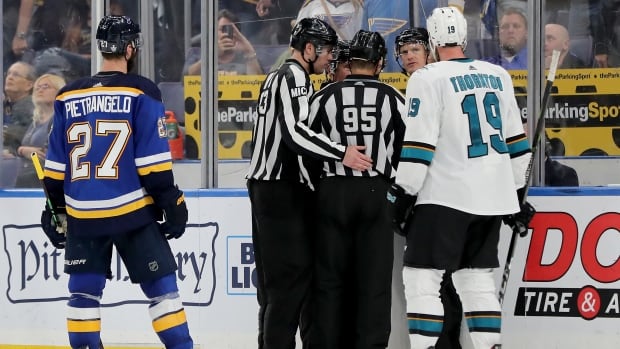 It’s something you can count on from fans and media alike every NHL season.

Sometimes you chalk it up to homerism, to bias, or even the fans needs to simply complain. But sometimes, the complaining feels warranted.

In this year’s playoffs, there have been plenty of teams with reason to be upset.

The Vegas Golden Knights were up 3-0 in Game 7 before a controversial major penalty sent them spiraling, and they were knocked out in Round 1.

The Colorado Avalanche were offside (but were they?) in Game 7 where a goal was called back, and they were knocked out in Round 2.

The St. Louis Blues were in overtime of Game 3 of the Western Conference final before a clear hand pass sent the puck directly into the slot, and now they’re down 2-1 in the series.

Who’s the common opponent in all instances? The San Jose Sharks.

The Northern California squad has benefitted from the questionable refereeing in all three cases, and now they’re two wins away from the Stanley Cup Final.

It has been a tough playoff run for NHL referees, and Rob Pizzo looks back at some other calls that still has fans scratching their heads. 2:16

With Vegas up 3-0 and 10:47 remaining in Game 7, Sharks forward Joe Pavelski was cross-checked off the draw by Cody Eakin, then got tangled up with the Knights’ Paul Stastny before hitting his head on the ice. Pavelski left the game with a concussion and Eakin was assessed a major penalty.

The Sharks turned the five-minute power play into a four-goal explosion, and eventually outlasted Vegas 5-4 in overtime.

San Jose rallied from a 3-0 deficit in the game and a 3-1 deficit in the series, beating Vegas 5-4 in overtime in Game 7 and advance to the second round. 2:11

Midway through the second period of Game 7, the Avalanche scored an apparent goal to tie the game 2-2. But San Jose coach Peter DeBoer challenged the goal, claiming the Avs were offside.

Colorado forward Gabriel Landeskog was skating to the bench during a line change while Colorado had five other active players on the ice. But Landeskog’s skates were still on the ice, and he appeared to be offside before his team tied it up.

The goal was eventually disallowed and San Jose won the game 3-2. Off to Round 3.

On Wednesday, San Jose headed to St. Louis for Game 3 of the West final, with the series tied one apiece. In a back-and-forth game that saw the Sharks score with one minute remaining to force overtime, it was a call in the extra frame that left the Blues fuming.

Just over five minutes into overtime, the puck bounced in the air and Sharks forward Timo Meier swiped at the puck with his hand, sending it right to the stick of Gustav Nyquist, who quickly passed it to Erik Karlsson. With a wide open shot, Karlsson buried it behind Jordan Binnington, giving the Sharks the win.

But it seemed as though everyone in the building saw what Meier did. The Blues. The Fans. The millions watching on TV. Everyone, except the referees.

St. Louis pleaded, the crowd booed and the officials conferred. But in the end, hand passes are not reviewable and the goal stood. The referees left the ice, the Blues slammed their sticks and the Sharks retreated to the locker room with a 2-1 series lead.

A hand pass, unseen by the referees, gifted the San Jose Sharks the overtime game winner in Game 3 over the St. Louis Blues. 1:02

Regardless of whether San Jose eventually heads to the Stanley Cup final, Vegas, Colorado, and St. Louis will all be left with one question: What if?