One of the recipients of what’s believed to be North America’s first paired living liver donation is calling the stranger who saved his life “an angel.”

About 100 staff and doctors looked after the pairs before, during and after the surgeries.

The feat was revealed at Toronto General Hospital Tuesday morning, when patients and doctors touted the potential that the rare procedure has to save lives.

The transplant program says paired liver exchanges have been performed in South Korea and Hong Kong, but there are no published reports of them being done in Europe or North America.

“To my donor, I would like to say that I have the deepest regards for you,” Khan, who was diagnosed with non-alcoholic liver cirrhosis in 2017, said in a prepared statement before Tuesday’s media event.

“I appreciate what you did from the depth of my heart. I salute you for doing such a tremendous job. For coming forward and helping me.”

It was all possible because of Bryan, whose blood type is the rare universal 0-negative, allowing her to donate blood to anyone. She says she wanted to help a stranger with a gift. 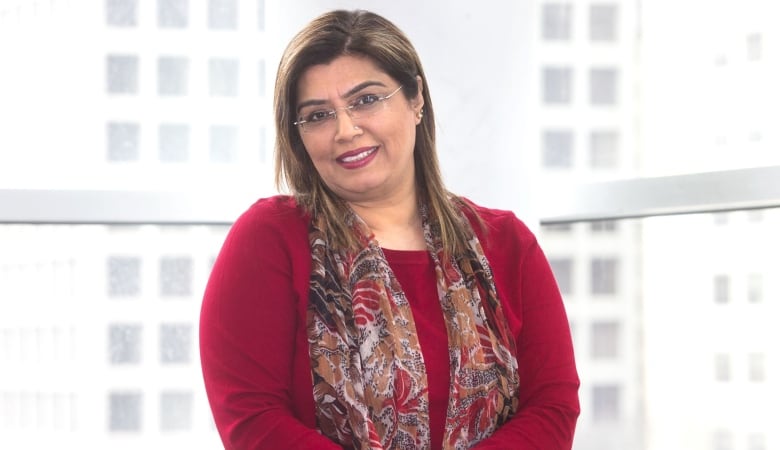 Hina Khan, Muhammad Khan’s wife, donated more than half of her liver to a stranger to complete the paired living donation. (Chris Young/The Canadian Press)

“Although they’re not my friend or family member, they’re still someone else’s friend, family, loved one and they deserve the gift of a new liver and new life,” Bryan says in the same release.

Hina was not a match for her husband, so she was paired by the medical team with another, compatible recipient. That person chose to remain private.

Dr. David Grant, a UHN transplant surgeon, notes that an anonymous living donor — someone who chooses to donate to a recipient they don’t know — can help two dying patients instantly, by effectively creating two new compatible pairs and allowing those on the deceased donors’ list to move up two places.

“That’s why it is so important to shout out to the world how life-changing and important this gift is,” says Grant, noting that 50 to 100 people a year die while waiting for a liver transplant in Ontario.

Almost 300 people are on the waiting list for a liver in Ontario.

Similar paired exchanges involving kidneys have been performed for 15 years, but liver exchanges are far more rare and riskier.

“I have the utmost admiration for living donors,” says Grant.