The pregnant widow of a fallen U.S. soldier whose combat death led to a political fight between Donald Trump and a Florida representative says the phone call from the president left her angry and crying.

Myeshia Johnson told ABC’s Good Morning America on Monday she has nothing to say to the president. She said his phone call made “me cry even worse.”

Sgt. La David Johnson, 25, and three comrades died Oct. 4 in Africa when militants tied to the Islamic State in Iraq and Syria attacked them.

The war of words between the president and Democratic Rep. Frederica Wilson began Tuesday when she said Trump told Myeshia Johnson in a phone call that her husband “knew what he signed up for” and didn’t appear to know his name, an account later backed up by Johnson’s aunt.

“I heard him stumbling on trying to remember my husband’s name, and that’s what hurt me the most because if my husband is out here fighting for our country and he risked his life for our country, why can’t you remember his name,” she said, according to a show transcript.

White House Chief of Staff John Kelly defended Trump, indicating that making such a phone call was difficult under any circumstances. He excoriated Wilson for listening in on the phone call, but Johnson said Wilson was there at her behest.

“Whatever Ms. Wilson said was not fabricated,” Johnson said in her first interview since her husband’s death. “What she said was 100 per cent correct.”

Soon after Johnson’s appearance on GMA aired, Trump took to Twitter to dispute her characterization of their phone call.

I had a very respectful conversation with the widow of Sgt. La David Johnson, and spoke his name from beginning, without hesitation!

Johnson’s body was found two days after the other three dead Americans were discovered, although the reasons for that delay aren’t clear. The other dead U.S. soldiers were identified as Bryan Black, Dustin Wright and Jeremiah Johnson, all staff sergeants.

The attack, which left several Nigerien soldiers dead, is under official military investigation, as is normal for a deadly incident.

Defence Secretary James Mattis said the U.S. has about 1,000 troops in that part of Africa to support a French-led mission to disrupt and destroy extremist elements. He said the U.S. provides aerial refuelling, intelligence and reconnaissance support, and ground troops to engage with local leaders. 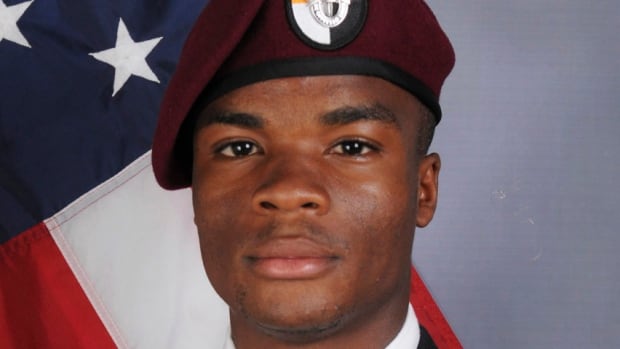 The body of Sgt. La David Johnson, who was killed in an ambush in Niger, was located two days after those of his comrades, although the reason for that delay isn’t clear. (U.S. Army Special Operations Command via AP)

John McCain and Bob Corker, Republican senators on the armed services committee, have criticized the Trump administration’s slow response to requests for information on the circumstances of the deadly incident in Niger.

Mattis promised to provide accurate information as soon as it becomes available, but offered no timetable late last week.

“The loss of our troops is under investigation,” he said. “We in the Department of Defence like to know what we’re talking about before we talk.”

“I’m going to tell her how awesome her dad was, and what a great father he was and how he died as a hero,” she said.